The pandemic has been surprisingly helpful to the turnarounds under way at
Nissan
and its French alliance partner Renault.

On Thursday, Nissan slightly upgraded its profit outlook for the year through March alongside reporting its quarterly results. The news was actually somewhat disappointing compared with more dramatic announcements last week from Toyota and
Honda,
which both more than doubled their forecasts for full-year operating profit compared with the numbers put out three months ago. Nissan still expects to make losses.

The company is in the early stages of a multiyear recovery following a crisis precipitated by the departure of Carlos Ghosn. The former chairman focused on scale, which he achieved by setting sales targets. This ultimately had the effect of undermining profit as pushing cars into the U.S. rental market, in particular, cheapened the brand. The new narrative—both at Nissan and Renault, where Mr. Ghosn was chief executive—is “value over volume.” The companies are intent on improving vehicle prices and margins.

This year’s distorted vehicle markets have been an ideal backdrop for such a strategy, as lockdowns flushed inventories out of the system while boosting demand for driving. Nissan had 530,000 cars on its own lots and those of its dealers at the end of September, down from 800,000 at the end of March. This, combined with the collapse of the travel-oriented rental market, helped the company achieved a 3% increase in U.S. vehicle prices in the quarter through September compared with the same period last year. 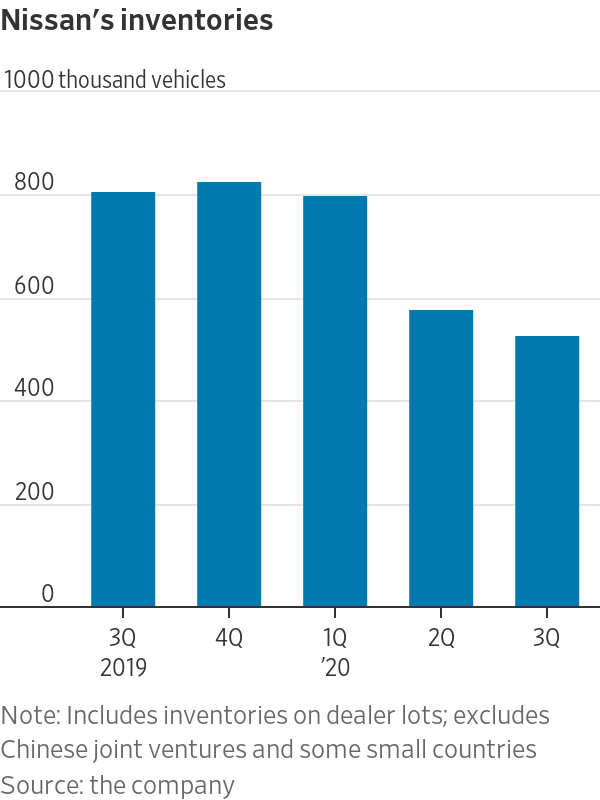 Renault, which hired a new chief executive with a marketing background from
Volkswagen
in July, is on a similar journey, though it is arguably behind its Japanese partner. French companies don’t report quarterly profits, but revenue for the three months through September reported last month was lifted by higher prices.

Whether the companies can maintain the momentum as the market normalizes depends on the popularity of new products. At Nissan, a redesigned version of the Nissan Rogue sport-utility vehicle went on sale in the U.S. last month. Next year will come the Ariya electric crossover, which the company is counting on to revive its flagging reputation for technology leadership.

So far, signs of success on the long road to recovery for Nissan and Renault can mainly be attributed to good fortune. They will need more driving skills for the next leg.

Among first acts, Biden to call for 100 days of mask-wearing

How to Release Your Pent-Up Rage From 2020

Disney, DraftKings, Palantir, Li Auto: What to Watch When the Stock...