Nvidia
reported strong fiscal third-quarter results Thursday afternoon, managing to beat some already aggressive targets laid out by Wall Street. Revenue set new records at both the company’s key videogaming and data center segments, with sales for the latter exploding 162% year-over-year to hit $1.9 billion. Gaming revenue jumped 37%, exceeding $2 billion for the first time on a quarterly basis, thanks to strong demand for the company’s latest processors—and that was with supply shortages that the company said Thursday would take a few more months to clear. 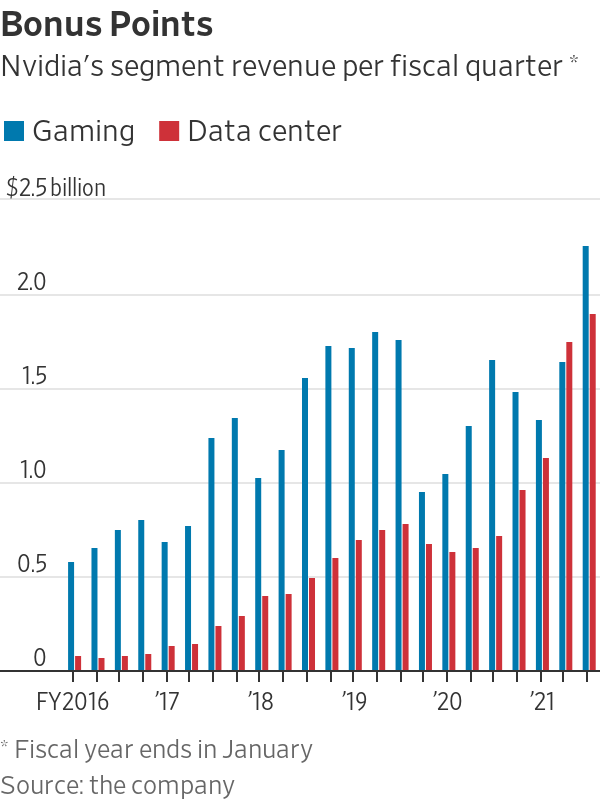 The stock, however, slipped about 2% in after-hours trading. Nvidia projected overall revenue growth of 55% year-over-year for the fiscal fourth quarter ending in January—well above the 41% expected by analysts. But the quarter includes an extra week that might not have been fully factored into Wall Street’s targets, and Nvidia did note that it expects a sequential decline in its data center segment for the quarter. Analysts had been expecting a small sequential rise for that segment.

Mostly, though, Nvidia’s problem is that investors have run its stock up so much. Even great numbers weren’t enough. Nvidia’s share price is up more than 128% for the year—the biggest gainer by far on the PHLX Semiconductor Index. It also has been trading at a record-high valuation of more than 50 times forward earnings, more than twice its peer group’s average.

So a breather seems due, even with a strong gaming cycle still ahead. The company’s new Ampere gaming chips are flying off the shelves, with Chief Financial Officer Collette Kress saying on the company’s conference call that several key retail partners “sold out instantly.” Nvidia’s gaming business also should be helped by strong holiday demand for the Nintendo Switch console, which uses its processors. Finally, the company said sales of its core data center processors also will grow in the quarter, explaining that the projected sequential decline was more due to the recently acquired Mellanox business.

Nvidia, in other words, is still flying high. The stock had just already reached thin air.

How to Survive Pandemic Money Fights

Investors Diurnal Team - November 7, 2020 0
A half-century ago, the federal government set out to attack the racial wealth gap by supporting Black-owned banks. Policy makers hoped the banks would lend to Black communities sidelined by the mainstream financial system. But five decades of federal financial and regulatory support have failed to boost America’s Black-owned banks. The majority have disappeared under the burden of soured loans, bigger competitors created by mergers and financial downturns that hit small lenders hard. Fifteen years ago America had 36 Black-owned banks, government data show. Now there are 18. And Black people still face obstacles to getting loans. Would-be borrowers in Black neighborhoods over the past decade have been less likely to have their home loans approved than borrowers in other neighborhoods, according to a Wall Street Journal analysis of federal data in the nine largest cities by raw Black population. Those who do get home loans are likely to pay more than other borrowers on comparable loans. A FDIC survey found last year that 13.8% of Black households in America don’t have bank accounts at all, compared with 5.4% of the overall population. The
Economy

Investors Diurnal Team - November 20, 2020 0
WASHINGTON — Treasury Secretary Steven Mnuchin said he does not plan to extend several key emergency lending programs beyond the end of the year and asked the Federal Reserve to return the money supporting them, a decision that could hinder President-elect Joseph R. Biden Jr.’s ability to use the central bank’s vast powers to cushion the economic fallout from the virus.Mr. Mnuchin on Thursday said he would not continue Fed programs, including ones that support the markets for corporate bonds and municipal debt and one that extends loans to mid-sized businesses. The emergency efforts expire at the end of 2020, but investors had expected some or all of them to be kept operational as the virus continues to pose economic risks.The pandemic-era programs are run by the Fed but use Treasury money to insure against losses. They have provided an important backstop that has calmed critical markets since the coronavirus took hold in March. Removing them could leave significant corners of the financial world vulnerable to the type of volatility that cascaded through the system as virus fears mounted in the spring. By asking the Fed to return unused funds, Mr. Mnuchin could prevent Mr. Biden’s incoming Treasury secretary from