THE TIES that bind the world’s two biggest economies have been unravelling, in fits and starts, for a while. The latest episode involved fits, starts and confusion. On December 31st the New York Stock Exchange (NYSE) stunned investors by announcing that it would delist shares in China Telecom, China Mobile and China Unicom, the mainland’s three biggest telecoms firms, shares in which have been traded on Wall Street for years. It did so, it said, to comply with President Donald Trump’s executive order in November banning American investments in companies alleged to have links to the People’s Liberation Army (PLA).

This set off a fit among their American shareholders when trading resumed after the new-year weekend on January 4th. As the trio’s share prices swung wildly, funds scrambled to sell their stakes before the delisting, which the NYSE said would occur by January 11th. Speculation raged that CNOOC and PetroChina, state-run energy goliaths also listed in New York, could be next. Then came the start. Late on January 4th the NYSE declared it would not eject the firms after all.

The bourse said only that the U-turn was the result of “further consultation” with regulators. It did not respond to a request for further clarification, though a source familiar with the situation said that if “ambiguity” over whether the three companies are covered by the executive order is resolved, they may yet be delisted. Leland Miller of China Beige Book, a research firm, blames confusion in Washington, DC. The China hawks in the outgoing Trump administration are moving on, the Treasury is sympathetic to China-friendly Wall Street and Joe Biden’s incoming team wants no part of the discussion, he says.

Amid all this murkiness one thing is clear. Chinese companies listed in America are in for uncertain times. In December Mr Trump signed a bi-partisan law that would expel from exchanges in America those companies that do not allow American regulators to audit their accounts, which is the case for many Chinese ones. Mr Trump’s executive order is likely to remain a problem; Mr Biden may hesitate to rescind it. It affects more than 30 firms deemed too cosy with the PLA. To comply with it, FTSE Russell, which maintains global equity indices, plans to cut at least 11 Chinese technology firms from its roster. MSCI, a rival indexer, plans to boot ten Chinese firms from its benchmarks.

A rupture seems inevitable, then. How much will it matter? If it is limited to Chinese state-owned enterprises (SOEs), then not much. Only about a dozen SOEs trade in New York—and only thinly. Most have a more robust listing in Hong Kong or mainland China. Paul Gillis of Peking University argues that it “makes no sense for these companies to have us listings and be subject to us regulations”.

That leaves two other potential casualties. If private-sector firms are included then the number of Chinese firms listed in America swells to over 200, many of them in hot industries like technology and finance. Their combined market capitalisation exceeds $2.2trn. Many may have links (however tenuous) with the PLA.

Losing access to America’s sophisticated investors and deep pools of capital would sting such innovators as Lufax, a mainland fintech giant, which pulled off a $2.4bn flotation in New York in late October. It is why Alibaba, China’s e-commerce titan with a New York listing, hedged its bets in late 2019 by floating in Hong Kong as well. Others may follow. 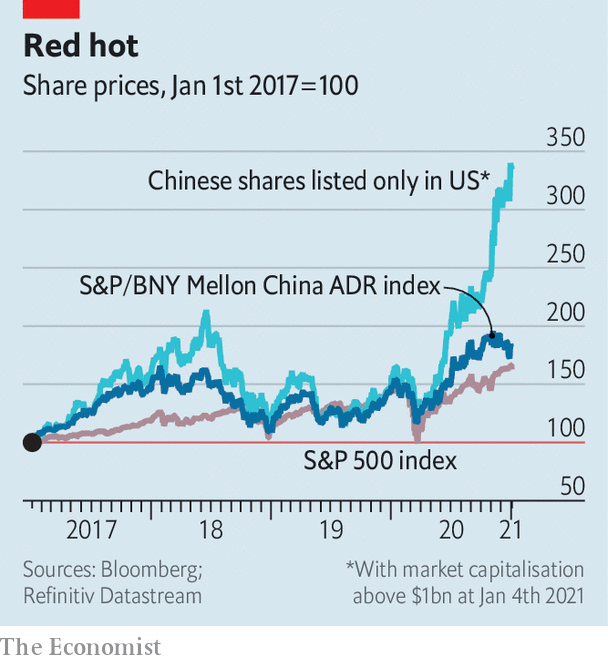 Another victim would be American investors. Goldman Sachs, a bank, estimates they hold 28% of the $2.2trn in Chinese-linked market value. They could miss out. Chinese stocks traded in America have outperformed the S&P 500 index of big American firms in the past four years. Those with no secondary listing in China, which have most to lose from expulsion, did even better (see chart). A hasty exodus by Chinese stars could force a fire sale. With Mr Biden unlikely to go easy on China, the most investors in Chinese shares can hope for is more coherence—and fewer fits and starts.

Impeachment and Throwing the Baby Out With the Bath Water

At least 15 killed, 11 injured in nursing home fire in Ukraine

Investors Diurnal Team - January 14, 2021 0
GameStop’s stock is on a multi-day winning streak. After surging 58 percent to close at $31.45 on Wednesday, shares of the video-game retailer are up by more than 8 percent in early trading on Thursday after the company reported strong holiday sales and added three activist investors to its board. Changes have been coming fast at the Grapevine, Texas-based company, which had shaken up the board earlier last year after the company reported one of the worst holiday seasons in a decade, with sales declining by 25 percent. Since then, Chewy.com founder Ryan Cohen took a 9-percent stake in GameStop in August buoying investors’ confidence in the 37-year-old retail chain.  This week, Cohen’s investment firm RC Ventures struck an agreement with GameStop to add three new members — Cohen and two other former Chewy.com executives — to the 10-member board. The new directors bring “deep expertise in e-commerce, online marketing, finance and strategic planning to GameStop,” the company said in a statement. “People took the board changes seriously,” said Wedbush analyst Michael Pachter, and they “are giving Ryan Cohen a lot of credit for the potential to expand GameStop’s market via ecommerce.” But the stars have already been aligning for
Business

Investors Diurnal Team - January 25, 2021 0
Boohoo Group plc (LON: BOO) said on Monday that it had bought Debenhams’ intellectual property assets in entirety for £55 million from its administrators. The deal includes the retailer’s selected contracts, related business information, and customer data but excludes its stores and staff. Plans of going into liquidation were initially announced in December. The move was expected to put 12 thousand workers out of jobs. As part of the agreement with the Boohoo Group, all UK-based Debenhams stores will shut down permanently after the completion of the transaction. Are you looking for fast-news, hot-tips and market analysis? Sign-up for the Invezz newsletter, today. Joint Administrator and Partner of FRP Advisory, Geoff Rowley, commented on the news on Monday and said: “I expect that the agreement with Boohoo may provide some job opportunities, but we regret that this outcome does not safeguard the jobs of Debenhams’ employees beyond the winding down period.” Boohoo Group’s performance in the stock market Boohoo Group performed fairly upbeat in the stock market last year with an annual gain of close to 15%. The online fashion retailer had seen a 45% increase in its H1 revenue, as per the report published in the last week of September 2020. The stock jumped roughly 3% in premarket trading on Monday and gained another 2% on market open. The Manchester-based
Business

Investors Diurnal Team - January 7, 2021 0
KFC unveiled an extra crispy chicken sandwich on Thursday as it seeks to compete with a craze kicked off by rival Popeyes in 2019.  KFC’s new $3.99 menu item, which will be served on a brioche bun and come with the option of spicy mayo, comes just days after other fast-food rivals grabbed headlines for their own poultry additions. Owned by Yum Brands Inc, KFC told Reuters its Crispy Colonel Sandwich was not “living up to our legacy as experts in fried chicken.” Popeyes — owned by Restaurant Brands International — sparked the chicken wars in 2019 with a $3.99 sandwich that was so popular it was sold out at many restaurants. That prompted other chains to seek to compete, including burger joints like McDonald’s. The Golden Arches this week said it will launch three new versions of a crispy chicken sandwich in February. And Shake Shack this week announced a limited edition Korean style chicken sandwich that will be available in its US stores through April 5. The Korean-style Fried Chick’n will be paired with Korean style fries, the company said. Burger King, also owned by Restaurant Brands International, may also join the fray as it has been testing a