Oil is extending a steady recovery into 2021, aided by fresh signals that the world’s biggest producers won’t turn on the spigots and flood the market.

U.S. crude futures recently rose above $50 a barrel for the first time since last February, the latest milestone in a rebound powered by an uptick in travel and economic activity following the easing of coronavirus restrictions. Output cuts by large suppliers from Saudi Arabia to U.S. companies are turbocharging the advance, giving traders confidence that demand will exceed supply.

Prices have hit new peaks since Saudi Arabia said last week it would unilaterally cut output in February as part of an agreement by the Organization of the Petroleum Exporting Countries and allies like Russia. The supply curbs instilled faith that the cartel will remain flexible with output even if the pandemic worsens and hurts demand.

U.S. shale producers are also indicating that they are in no rush to increase supply and instead plan to pay off debt and return cash to shareholders. Taken together, the commitments should help the energy industry’s recovery and highlight a recognition among producers that the economic toll caused by the pandemic is far from over, investors and industry executives say. That means there is no need for suppliers to spend on additional output.

“I don’t think the world really needs the oil at this point in time, so there’s not a big reason to grow,” said

Oil rose for the fifth consecutive session on Monday to $52.25, bringing its 2021 gains to 7.7%. The climb underscores the remarkable rebound since last April, when a glut briefly sent U.S. crude below $0 for the first time ever. 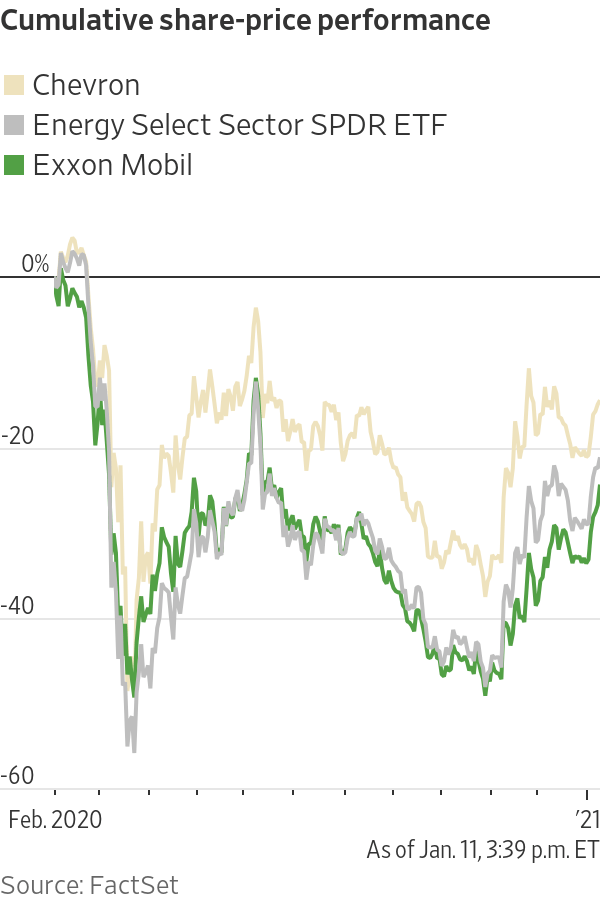 It also offers a boost for bruised companies like Pioneer and
Chevron Corp.
that have trimmed workforces in response to industry turmoil. The sector has been among the hardest hit by the coronavirus and the stretch of trading below $50 was the second-longest since oil first topped that level in 2004, according to Dow Jones Market Data.

The climb above $50 should benefit the global economy, analysts say. Prices are now high enough for many companies to cover their production costs, but not so lofty that fuel prices will jump for consumers. Some investors are betting the rally will continue as the delivery of coronavirus vaccines sparks travel at the same time that suppliers limit production.

Gary Ross,
chief executive of Black Gold Investors and founder of consulting firm PIRA Energy Group. “Demand will be back to 2019 levels earlier than people think, probably by the third quarter.” He expects oil to hit $60 some time in the first half of the year.

Among the “Ten Surprises”

Joe Zidle
of investment giant
Blackstone Group Inc.
included on their annual list of prognostications for the year ahead: crude rising further to $65 and energy numbering among the stock market’s leading sectors. 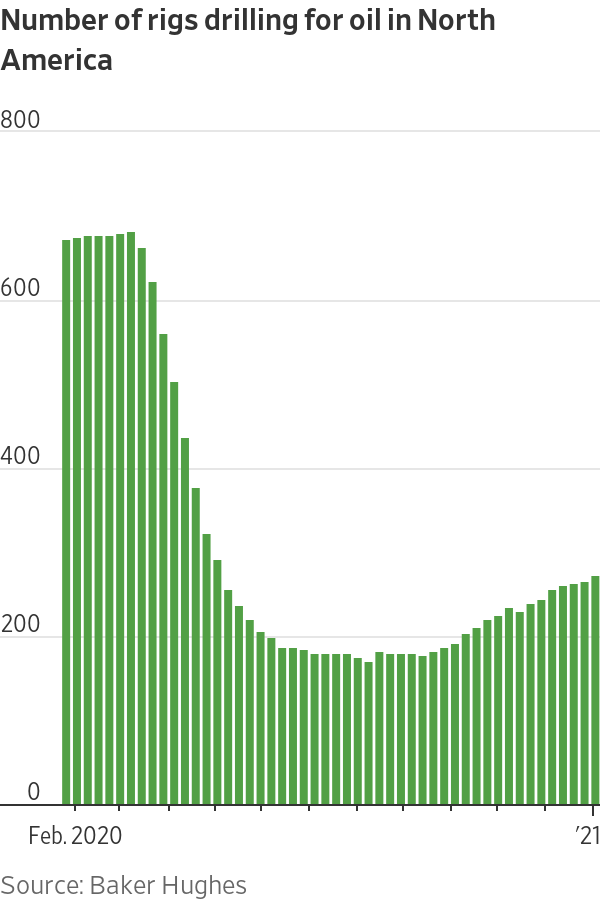 Beaten-down shares of producers have climbed recently with investors embracing the message that companies are in no rush to lift output. The number of oil rigs drilling in North America has only edged higher and is still well below where it was early in 2020, according to Baker Hughes.

It isn’t just a matter of promises to investors. Most American companies will have to give priority to paying off debts over boosting production in the wake of the pandemic, analysts say. Even with oil at $50, it would take the 20 largest U.S. shale companies 3.4 years on average to bring debt levels down to healthy levels relative to their overall capitalization, according to consulting firm Wood Mackenzie. 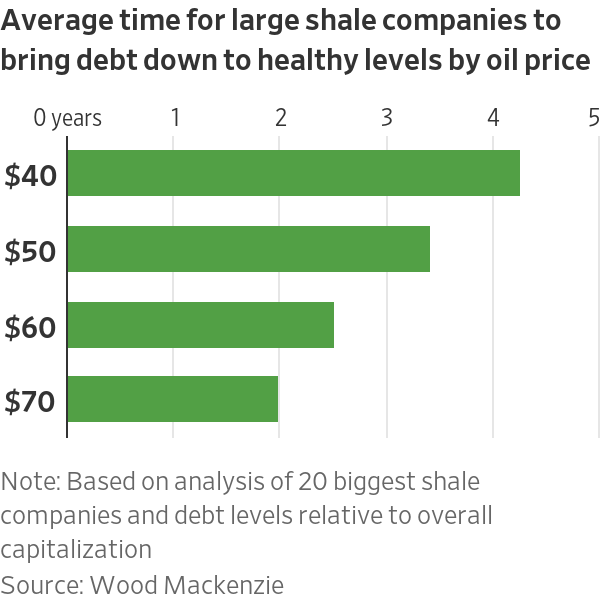 Many companies around the world are also bracing for a bumpy recovery, especially with a new variant of the coronavirus spreading and the vaccine rollout uncertain. That is increasing focus on the leading OPEC producers, which are expected to respond if the economy softens.

“If they have to, they can slow the pace of bringing supply back,” said

Rob Thummel,
a senior portfolio manager at investment firm Tortoise. “They seem to be pretty disciplined.”

How strong do you think a rebound in oil prices might be in 2021? Join the conversation below.

Another factor driving bullish sentiment: busier traffic patterns in large U.S. cities. Congestion during rush hour in December rose in 27 of the 40 cities tracked by analysts at Tudor, Pickering, Holt & Co. Gains were led by demand centers in New York, Chicago and Houston.

Even though many investors expect a winding path ahead, they are hopeful the coming months will offer more price stability after last year’s roller coaster.

“It feels much better today than it did for lots of parts of 2020,” said

Fracking regularly comes under scrutiny, but it’s an integral part to the cyclical nature of energy markets. Heard on the Street’s Jinjoo Lee explains how it all works. Photo: David McNew/Getty Images

Write to Amrith Ramkumar at amrith.ramkumar@wsj.com and Collin Eaton at collin.eaton@wsj.com

Angela Merkel sees 'much broader scope' for cooperation with Biden

Just Say No to Commuting

How to get noticed by Netflix job recruiters who can help you get hired,...

Investors Diurnal Team - January 19, 2021 0
Bank of America Corp. (NYSE: BAC) said on Tuesday that its profit in the fiscal fourth quarter topped analysts’ estimates. But revenue, it added, missed estimates as global markets segment performed weaker than expected in Q4. Bank of America shares were reported close to 1.5% down in premarket trading on Tuesday. The stock is currently trading at £24 per share versus a low of £13.25 per share in March 2020. Are you looking for fast-news, hot-tips and market analysis? Sign-up for the Invezz newsletter, today. Bank of America Corp’s Q4 financial results versus analysts’ estimates Bank of America said that its net income in the fourth quarter came in at £4.04 billion that translates to 43.36 pence per share. In the same quarter last year, its net income stood at a higher £5.14 billion or 54.38 pence per share. The investment bank authorised £2.13 billion of stock buyback programme on Tuesday. At £14.77 billion, total revenue in Q4 printed 10.1% lower than last year. According to FactSet, experts had forecast the company to record a higher £15.12 billion of revenue. Their estimate for per-share earnings stood at a lower 40.42 pence. In the prior quarter (Q3), Bank of America Corp had registered a 10.8% decline in its revenue. The American multinational said that its net income recorded a 15.5% annualised decline in the recent quarter but still came in marginally higher than the analysts’ anticipation. Consumer banking revenue also topped estimates despite a 13.4% year over year decline. Global markets revenue, on the other hand, jumped 14.1% but still missed expectations. Other prominent figures in Bank of