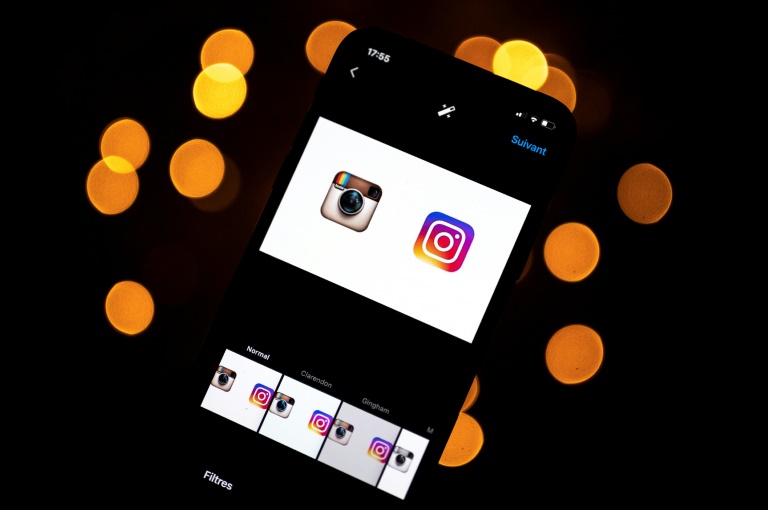 Content on Instagram has taken a more political edge, after first becoming popular 10 years ago for its users’ often upbeat photos.

WASHINGTON: Artful photos of sunsets and ice cream are being challenged by more activist content on Instagram as it turns 10 years old in a time of social justice protests, climate crisis, and the pandemic.

Founded in 2010 by Kevin Systrom and Mike Krieger, the app had one billion users two years and has grown fast since then, after first capturing the public’s attention with its image filters, and easy photo editing and sharing tools.

But playful pictures, once a hallmark of Instagram, are increasingly seen as off-key when people are “losing jobs, being sick, isolated and depressed, then on top of that the BLM (Black Lives Matter) protests and everything going on with the US election,” reasoned Rebecca Davis.

In 2016 she created ‘Rallyandrise’, an account devoted to helping people engage politically.

“Not that there’s no time and place for pretty photos, but maybe people are trying to find a balance,” she said.

The number of people subscribing to the New York resident’s account has more than doubled to 24,000 in recent months.

In May, protests erupted across the US after a video was shared across social media of handcuffed Black man George Floyd dying while a police officer knelt on his neck for more than five minutes in Minneapolis.

Simultaneously, the pandemic had people hunkering down inside and spending more time than ever before online.

Overshadowing it all was the contentious presidential election in November.

“People were desperate for advice and guidance in doing something,” Davis said.

Online petitions, fund-raising and organizing became the norm and Instagram was prime terrain for the trend.

Former US presidential contender Hillary Clinton and celebrity Kourtney Kardashian among several public figures who have used Instagram to spotlight racial issues by handing over their accounts to prominent African-Americans for 24 hours.

“Instagram is our highest, most effective platform when it comes to getting users to follow through on action links,” said American Civil Liberties Union (ACLU) social media manager Emily Patterson, referring to getting people to click through to sign petitions, organize protests, or contact members of Congress.

“It has the audience we’re trying to reach.”

Instagram’s Stories feature lets users present collections of images, such as a day spent protesting. And the app also ramped up its array of sharing tools.

For political movements, Instagram has a coveted audience of young adults, from teenagers to people in their 30s, connecting with friends and peers.

“On Facebook it’s not just chosen friends and communities, it’s also your parents, roommates, ex-partners — a broad collection of everyone someone’s ever known,” Patterson said.

“So people don’t get into that platform on something deeply important to them.”

And Instagram is where people are spending a lot of time, which makes it ripe for activism.

The results are proven, according to Patterson.

The ACLU got complaints from US lawyers about “how much they hated people coming at them from social media” about separating immigrant children from their parents at the Mexico border, “and it mostly came from Instagram,” Patterson said.

Environmental activism is well suited for the image-focused app, moving people to action with heart-breaking pictures such as koala bears burnt in Australian fires.

Immunologist Dr Noc, 27, said that few people go to Instagram for education, so you have to surprise them with knowledge.

“People prefer bite size bits of information with captions, that are easy to digest and also are entertaining,” said Noc, who uses his account to explain Covid-19 and the pandemic.

Looking to the future, Noc has actually found his growth more explosive on video-snippet sharing app TikTok — he suspects his success is down to fewer people posting there about immunology.

He spends hours making videos for his 200,000 TikTok followers and reposts the clips on Instagram, where he has a smaller following.

In the fast-moving tech world, Instagram marks its 10th birthday with its new political edge now under threat from the younger upstart.

Dow Jones Industrial Average weakened on a weekly basis but remains in a bull...

Investors Diurnal Team - October 26, 2020 0
SAP SE reports a 4% year over year decline in third-quarter revenue. The German multinational saw a 1% annualised decline in operating profit. The business software maker cuts its full-year guidance due to COVID-19. SAP SE (ETR: SAP) said on late on Sunday that its sales and profit in the quarter that concluded on 30th September came in lower than expected. The company attributed the decline to the ongoing Coronavirus pandemic that weighed on demand in recent months. Shares of the company opened close to 20% down in the stock market on Monday. On a year to date basis, SAP SE is now more than 15% down. It is now trading at £92.51 per share versus a low of £82.59 per share in March when the impact of COVID-19 was at its peak. Confused about choosing a reliable stockbroker to trade online? Here’s a comparison of the top few to make selection easier for you. Are you looking for fast-news, hot-tips and market analysis? Sign-up for the Invezz newsletter, today. SAP’s revenue from software and cloud services slides 2% SAP SE reported £5.92 billion of revenue in the fiscal third quarter that represents a 4% decline as compared
Tech

Investors Diurnal Team - October 11, 2020 0
Usually, a bounce-back of a minimum of 20% happens in technology stocks following a correction, analysts note Now is a good time to renew mega-cap tech investments with newer themes - UBS The Zurich-based bank encourages investors to diversify within the technology sector. Technology stocks have been among the best performers this year. Still, some analysts believe that investors should be more picky with tech stocks going forward. Diversification advised Mark Haefele, CIO of UBS Global Wealth Management, believes that stocks that represent the ‘more normal’ theme will perform better than tech giants.  Are you looking for fast-news, hot-tips and market analysis? Sign-up for the Invezz newsletter, today. The investment banking company said that recent price volatility seen in the tech sector has indicated concentration risks and also signalized that uncertainty regarding the technology antitrust will persist until the US presidential election.  “We think global equity gains from here may lean more heavily on ‘more normal’ themes rather than the ‘stay at home’ dynamics that have favored mega-cap tech,” UBS said.  The Zurich-based bank encouraged investors to diversify within the technology sector.  “Tech stocks are not in a bubble, in our view, and are fairly valued given their earnings growth outlook,” UBS said.  The firm still likes “many of the largest names” but also pointed out that now is a good time to renew mega-cap tech investments with newer themes.  “We like 5G enablers and platform beneficiaries, which include leaders in smart mobility, cloud, and gaming, as well as China’s digital economy stocks, including ecommerce, food delivery, travel, search and fintech services,” UBS said. The bank forecasted that the next rally will likely be predicated on progressive mobility gains, optimistic Covid-19 vaccine developments as well as developments in United States political dynamics. British stocks, US mid-cap stocks, rising market value stocks and worldwide industrial stocks are all likely to benefit from this trend, the bank said.  “Rebalancing mega-cap tech exposure does not mean selling it all off,” UBS added. The wealth manager pointed out that usually, a bounce-back of a minimum of 20% happens in technology stocks following a correction.  Therefore, investors shouldn’t worry about short-term volatility or consider it a massive threat. Instead, the bank advised investors to use this volatility to “build up positions using options, structured investments, or a disciplined phasing-in strategy where appropriate”. 4 tech stocks to buy in Q4 Here are four tech stocks that are likely to yield positive returns in the fourth quarter.  Alphabet Google’s parent company Alphabet (NASDAQ: GOOGL) reported the first negative revenue growth in its history earlier this year. However, analysts are adamant that Alphabet is likely to return impressive gains on the back of its diversified portfolio.  BofA’s strategist Anthony Cassamassino picked GOOGL as a “high conviction” idea for the fourth quarter.  Similarly, equity analyst Justin Post has a “Buy” rating and $1,850 price target for GOOGL stock.  “We believe that search advertising could be recovering faster than expected, while new business initiatives in subscription content, Cloud and self-driving vehicles are long-term COVID beneficiaries,” he wrote in a note to clients. Nvidia Nvidia (NASDAQ: NVDA) has grown into a proper tech behemoth. Nearly all prominent tech companies use Nvidia’s products to power its units and artificial intelligence processes. Therefore, it doesn’t come as a surprise that NVIDIA’s data center revenue erupted 167% year-over-year in the most recent quarter. Nvidia’s impressive portfolio has grown further this year after the tech giant agreed to purchase the UK-based chipmaker Arm from SoftBank Group (T: 9984) for $40 billion.  Given the company’s recent performance and forward-looking outlook, both Oppenheimer and BMO raised their price target on NVDA to $600 and $650, respectively. Target Target (NYSE: TGT) stock price has rallied impressively this year helped by stronger consumer spending. A few days ago, Deutsche Bank’s analyst Paul Trussell maintained a “Buy” rating and $177 price target on the stock. “Target is one of the retailers we are most bullish on into the Holiday period as it should be a prime destination for gift giving, toys, and seasonal décor (Halloween costumes and Christmas decorations) and should continue to showcase market share gains,” the analyst wrote in a note to clients.  The company’s shares are trading over 25% this year despite the pandemic. According to Trussell the shopping season is likely to help the stock to climb even further.  “We believe the company has a strategy that will resonate with consumers including Black Friday pricing throughout all of November (stores will be closed on Thanksgiving), Target Deal Days October 13-October 14, and extended price match guarantee”. Twilio Twilio’s (NYSE: TWLO) guidance is that the company will record a 30%+ revenue growth over the next four years. Yesterday, Twilio announced it will acquire data startup Segment in a $3.2 billion deal. “A 4-year, 30%+ growth outlook cements TWLO as a member of our high growth comp group for nearly another half decade minimally,” wrote RBC Capital’s analyst Alex Zukin. According to Zukin, there are three key underlying factors supporting TWLO’s growth outlook: 1) an expansive market opportunity, 2) an accelerating core messaging business, and 3) a nascent enterprise sales motion. He reiterated his ‘Buy’ on TWLO and increased the price target from $320 per share to $375. Summary UBS Global Wealth Management believes the gains in technology stocks will likely abandon the mega-cap tech stocks and move to ‘more normal’ themes. Analysts note that a bounce-back of a minimum of 20% happens in technology stocks following a correction.
Tech

Investors Diurnal Team - October 14, 2020 0
Twitter forbids using the platform "to artificially amplify or suppress information or engage in behavior that manipulates or disrupts people's experience" on the platform. SAN FRANCISCO: Twitter said Tuesday it had suspended several fake accounts purporting to be African Americans who support President Donald Trump and which had succeeded in garnering several thousand followers in just a few days. "Our teams are working diligently to investigate this activity and will take action in line with the Twitter rules if Tweets are found to be in violation," said a spokesman for the San Francisco-based company. Darren Linvill, a professor at Clemson University who specialises in disinformation on social media, published some examples of the fake accounts on Twitter, accusing them of using "digital black face". "Yes IM BLACK AND IM VOTING FOR TRUMP!" said one of the examples he shared, under the name of Ted Katya on Sept 17. "Libs wont like that but I dont care!!!" The tweet was shared 6,000 times and "liked" more then 16,000 times. Most of