Coronavirus lockdown measures in Europe and weakening consumption in the Americas will result in global oil demand taking a larger hit in 2020 than previously expected, the Organization of the Petroleum Exporting Countries said Wednesday.

Those cuts, when combined with the Vienna-based organization’s resilient non-OPEC supply forecasts and its cut to its 2021 global growth rebound forecast—now 4.4% from 4.5% previously—present a dismal outlook for oil markets in the coming months.

OPEC hedged its forecasts, saying that “further [economic] support, currently unaccounted for, may come from an effective and widely distributable vaccine as soon as the first half of 2021.” 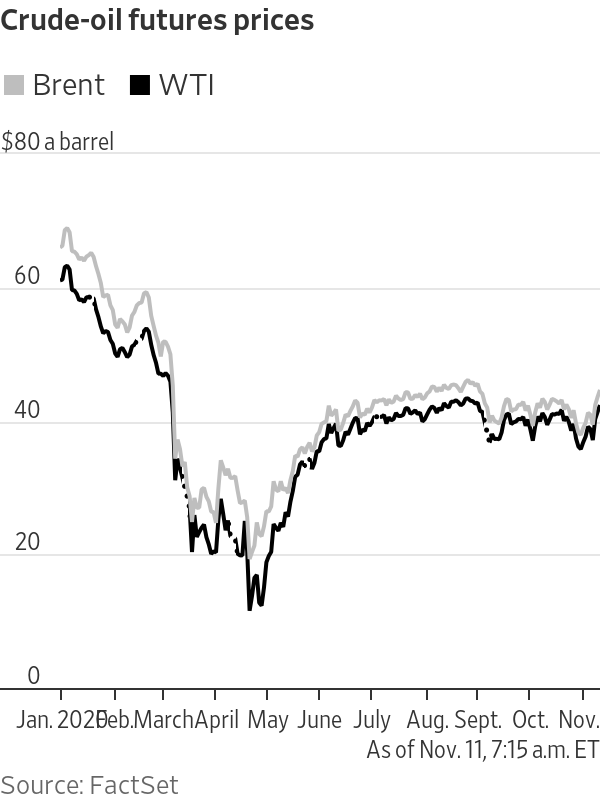 Oil prices and equities have shot up this week in the wake of the news that
Pfizer’s
and BioNTech’s coronavirus vaccine was 90% effective in early tests. That has sparked hope among investors that economic activity will normalize in 2021.

The two benchmarks are up 18% and 19% respectively in November so far, while shares in BP PLC and
ConocoPhillips
have climbed more than 20% since Monday’s open.

Even so, the short-term outlook for the oil market remains gloomy. Fresh lockdown measures aimed at slowing the spread of the virus in Europe and rising oil supply present two challenges in 2020’s final quarter, according to Giovanni Staunovo, commodity analyst at UBS Wealth Management.

Torpid transportation demand and a slower-than-hoped economic recovery in the U.S. added to shutdowns in Europe, prompting OPEC to cut its demand forecast for the wealthy countries of the Organization for Economic Cooperation and Development by 500,000 barrels a day. Meanwhile, non-OECD countries such as China are recovering faster than expected, with OPEC increasing its demand forecast for those nations by 200,000 barrels a day.

Chinese crude imports in September rebounded to their third-highest level on record, beaten only by June and July this year, although that figure is expected to fall again in October with independent refiners having reached their quotas for the year, the report said. Growing production inside and outside of the cartel’s membership has given investors cause for concern in recent weeks. A combination of secondary sources used by OPEC put Libya’s production increase in October at 299,000 barrels a day after the country’s government negotiated an end to an eight-month-long blockade of its oil exports.

U.S. production is also increasing, with data on Friday from
Baker Hughes
showing an increase in active rigs for the seventh straight week.

Those factors had prices looking shaky early last week before The Wall Street Journal reported that OPEC was considering reversing or delaying its plans to further relax production curbs by 2 million barrels a day starting in January. Saudi energy minister Prince Abdulaziz bin Salman made similar remarks when speaking at a conference in Dubai earlier this week, according to reports.

OPEC members are likely to be closely watching further developments on any vaccines, as well as the current virus infection rates, as they weigh up their options ahead of their meeting with non-OPEC allies such as Russia in early December.

Write to David Hodari at David.Hodari@dowjones.com

China's Risky Bet on a Lonely Return to Greatness

Investors Diurnal Team - November 26, 2020 0
Edward P. Lazear, a pioneering labor economist at Stanford University who advised President George W. Bush during the financial crisis, died on Monday. He was 72.The cause was pancreatic cancer, the university said. It did not say where he died.Professor Lazear may be best remembered as the founder of a field that has come to be known as personnel economics, which seeks to understand how businesses hire, retain and pay employees. He also founded the Journal of Labor Economics and the Society of Labor Economists.But perhaps his most critical job was as chairman of President Bush’s Council of Economic Advisers when the American financial system buckled after a housing and debt bubble had burst, forcing the federal government to spend hundreds of billions of dollars to bail out financial institutions and rescue a sinking economy.“Eddie Lazear was a rare combination — an extraordinary academic economist and a dedicated public servant who brought that intellect and skill to the solution of big policy problems,” said Condoleezza Rice, director of Stanford’s Hoover Institution, where Professor Lazear held a senior fellowship.In a statement, Mr. Bush called him “a trusted confidant” and “a beloved colleague.”Edward Paul Lazear was born in New York City on
Economy