The question of whether consumers are spending has different answers depending on where you look. Spending on credit cards? Down. Spending on debit cards? Way up.

Debit has been the hero for many payments companies this year. Card networks as well as acquirers that handle payments for merchants have reported similar trends. At
Visa
and
Mastercard,
U.S. debit-card dollar payment and purchase volume collectively rose 23% year over year in the quarter ended in September, more than double the pre-Covid-19 growth rate; the same measure for credit cards was down 8%. 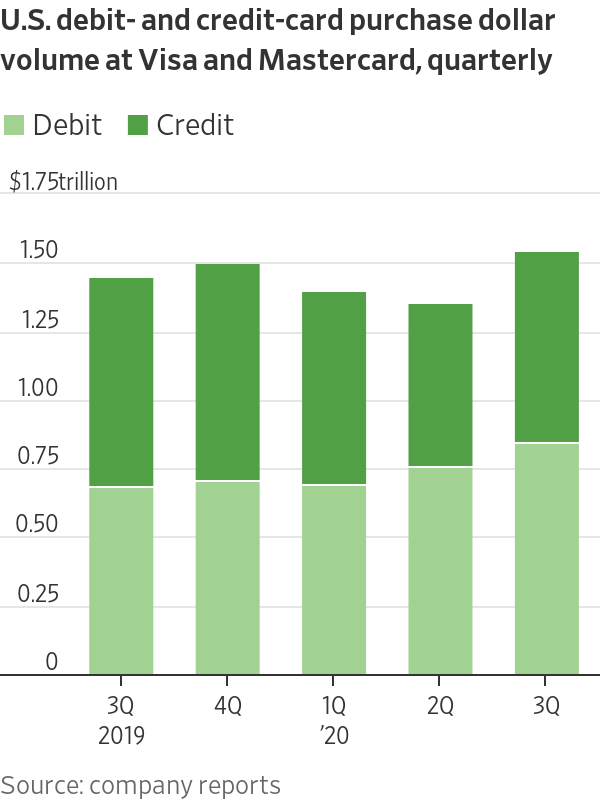 Investors should understand the drivers of this to get a sense of whether these volumes are sustainable. For one, payment firms are reporting that people are more often using contactless tap-to-pay when they shop in stores, perhaps to minimize touching amid the coronavirus pandemic. These are often purchases for relatively smaller dollar amounts, which tend to be put on debit cards. There is also more card use in online shopping for everyday things like groceries, which likewise are often debit purchases.

Economic stress plays a role, too. Some consumers may have been cut off from credit by lenders tightening their underwriting. Others simply like to use credit less during times of economic uncertainty. Government stimulus is also a factor: Many stimulus payments are made via prepaid cards that work on debit rails. What’s more, stimulus payments pad people’s checking accounts, which can lead to more debit usage.

Since credit’s stronghold—cross-border travel—isn’t coming back anytime soon, strength in debit will be vital for volumes. Visa and Mastercard are trying to push debit into more realms, for example by linking their instant-payment debit networks with apps such as
PayPal Holdings
’ Venmo and
Square’s
Cash App, to help move money faster between digital accounts.

If no additional stimulus arrives, and there is no major rebound in card-based travel-and-entertainment spending, debit-volume growth could come under pressure. One key will be the stickiness of contactless, which helps drive debit’s share gains versus cash. “We’re not going backwards to more cash usage,” said Autonomous Research analyst Craig Maurer, suggesting it is likely that “the majority of new habits will stick.”

This will be important as there is evidence people may not keep buying online quite so much as stores return to normal.
Alliance Data Systems,
which specializes in offering retailer cards, noted a downtick in certain online spending from the second quarter as more stores were open in the third quarter, while in-store spending jumped.

Notably, Alliance Data said this past week it is acquiring Bread, one of several technology firms that help people use their debit cards kind of like credit cards by spreading out payments over time, something known as “buy now pay later.” Alliance Data Chief Executive Ralph Andretta said Bread’s tools can help draw new, younger customers.

Another thing that may drive debit-card usage among younger customers is that more upstart financial-technology firms are offering them. Even crypto platform Coinbase launched a new debit card last week. One illustrative measure:
Cardtronics,
which partners with fintechs to provide their cards with ATM access, noted that third-quarter withdrawals via those partners were up 200% since the beginning of the year.

Most payment providers won’t mind if the debit habit sticks—so long as people are using their networks in some form. But it could become a long-term drag for banks and lenders that provide credit. For now, lenders and investors may be OK with limiting their credit risk. But eventually they will really need those high-yielding card loans to grow in a low-interest-rate world.

Write to Telis Demos at telis.demos@wsj.com

BlackRock poised to replace Goldman Sachs inside the White House

Uber, Lyft, Apple, Facebook, Amazon.com: What to Watch When the Stock...