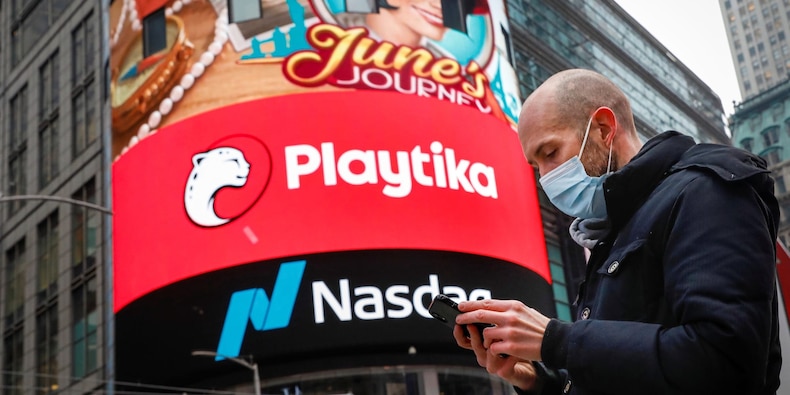 Shares of Playtika soared as much as 34% on Friday, giving the mobile game-developer a valuation of almost $15 billion in its first day of trading on the open market.

The jump comes after Playtika’s Thursday IPO raised $1.88 billion for the firm with 69.5 million shares priced at $27 apiece.

The share price exceeded the company’s initial targeted range of between $22 to $24, making the offering the largest Israeli IPO in history.

Playtika shares trade on the Nasdaq under the ticker symbol “PLTK.”

The likes of BlackRock, Caledonia, Dragoneer Investment Group, and Tiger Global Management loaded up on $600 million worth of shares in Thursday’s IPO.

Read more: GOLDMAN SACHS: Buy these 12 stocks set to soar at least 30% or more as they benefit from a surge of investment in Europe’s digital economy

Headquartered in Herzliya, Israel, Playtika was founded by Robert Antokol and Uri Shahak back in 2010.  The company was among the first providers of free-to-play games on social networks and mobile platforms.

Caesars Entertainment then acquired Playtika before eventually selling the company to a group of Chinese investors in 2016.

The firm now boasts over 3,700 employees in 19 offices around the world and notched revenue of $2.3 billion and adjusted EBITDA of $815 million for the 12 months ending Sept. 30.

Playtika has over 35 million monthly active users across its titles, including, Slotmania, Bingo Blitz, and Board Kings.

The Chinese backed mobile game expert expects to benefit from the increasing prominence of mobile games going forward. Mobile games generated $77.2 billion in revenue during 2020, growing 13.3% year-over-year, according to data from Newzoo.

However, Renaissance Capital noted in an IPO run-down released last week that the company gets almost half its revenue from just two games.

Read more: ‘Vastly technically disconnected’: A market strategist breaks down the 3 indicators that show Tesla is overpriced – and says it’s due for a 17% correction in the next 6 weeks

The Impending Divorce of Trump and the GOP

21 rags-to-riches stories that will inspire you

Tesla, Sarepta, Boeing: What to Watch When the Stock Market Opens Today

Investors Diurnal Team - August 24, 2020 0
Granite (NYSE:GVA) announced today that it has begun work for a $13 million task order at the Homewood, Illinois Station as part of a Multiple Award Construction Contract (MACC) for Americans with Disabilities Act (ADA) Stations Program by The National Railroad Passenger Corporation (Amtrak). The project contract will be included in Granite’s third quarter 2020 backlog. Granite was one of eight contractors selected in 2019 to participate in Amtrak’s ADA Stations Program MACC. The $100 million indefinite delivery/indefinite quantity (IDIQ) competitive MACC is comprised of task orders ranging from $25 thousand to $25 million, for five base years ending in 2023, plus five, one-year options through 2028. Granite is currently completing four ADA compliance upgrade projects that were previously awarded by Amtrak under this MACC Program, two in Montana and two in New York. Amtrak’s ADA Stations Program is a comprehensive program to make the Amtrak-served stations for which Amtrak has ADA responsibility, ADA compliant and accessible. In this task order, Granite will be responsible for the renovation of a portion of the existing Homewood station's building and surrounding site. Scope of work will include modifications to the sidewalks and parking lot, restrooms, existing waiting room seating and wall mounted accessories; and replacement of station entry doors, and ramps at both station entrances and landings. Additional renovations include interior and exterior signage, and the replacement of the existing track level asphalt platform with a new 650-foot boarding platform; the construction of a weather protected ramp from the station level to the existing tunnel; and modernization of platform elevator. "Given that this project includes multiple stakeholders and a fast-paced schedule, Granite's team has provided and will maintain a detailed phasing plan to ensure this project is safe, high-quality and is completed on-time,” said Granite Regional Vice President Benj Harding. "The robust phasing plan has been developed to minimize disruption to the traveling public.” Construction is underway and expected to conclude in December 2021. About Granite Granite is America’s Infrastructure Company™. Incorporated since 1922, Granite (NYSE:GVA) is one of the largest diversified construction and construction materials companies in the United States as well as a full-suite provider in the transportation, water infrastructure and mineral exploration markets. Granite’s Code of Conduct and strong Core Values guide the Company and its employees to uphold the highest ethical standards. In addition to being one of the World’s Most Ethical Companies for eleven consecutive years, Granite is an industry leader in safety and an award-winning firm in quality and sustainability. For more information, visit the Granite website, and connect with Granite on LinkedIn, Twitter, Facebook and Instagram. View source version on businesswire.com: https://www.businesswire.com/news/home/20200824005112/en/
Markets

Investors Diurnal Team - September 10, 2020 0
CarMax, Inc. (NYSE:KMX) will report its financial results for the second quarter ending August 31, 2020, before the market opens on September 24, 2020, and it will host a conference call with investors at 9:00 a.m. ET to discuss these results. Participants on the call will include Bill Nash, president and CEO, Tom Reedy, executive vice president, finance, Enrique Mayor-Mora, senior vice president, CFO and Jon Daniels, senior vice president, CAF Operations. The live conference call can be accessed by dialing 1-888-298-3261 (or 1-706-679-7457 for international access) and entering the conference ID 4959887. A live audio webcast also will be available at investors.carmax.com. A replay of the webcast will be available on the company’s website at investors.carmax.com through December 21, 2020, or via telephone (for approximately one week) by dialing 1-855-859-2056 (or 1-404-537-3406 for international access) and entering the conference ID 4959887. About CarMax CarMax, the nation’s largest retailer of used cars, revolutionized the automotive retail industry by driving integrity, honesty and transparency in every interaction. The company offers a truly personalized experience with the option for customers to do as much, or as little, online and in-store as they want. CarMax also provides a variety of vehicle delivery methods, including home delivery, contactless curbside pickup and appointments in its stores. During the fiscal year ending February 29, 2020, CarMax sold more than 830,000 used cars and more than 465,000 wholesale vehicles at its in-store auctions. CarMax has 220 stores, over 25,000 Associates, and is proud to have been recognized for 16 consecutive years as one of the Fortune 100 Best Companies to Work For®. For more information, visit www.carmax.com. View source version on businesswire.com: https://www.businesswire.com/news/home/20200910005978/en/
Markets

Investors Diurnal Team - January 12, 2021 0
TORONTO, Jan. 12, 2021 /PRNewswire/ -- MedC Biopharma Corporation ("MedC"), a Canadian clinical-stage biopharmaceutical company that develops and commercializes products containing cannabinoids and/or other natural compounds, is pleased to announce a strategic partnership agreement with Sana Healthcare ("Sana"). Sana is a specialist importer, wholesaler and distributor of cannabis-based medicines and supports biopharmaceutical companies in selecting and then pursuing the most appropriate clinic pathways in the UK. The partnership will advance the development of MedC's product platform for the treatment of Cutaneous T-Cell Lymphoma (CTCL) Sezary Syndrome. MedC has a science-based pipeline of botanically derived products with substantiated medical claims. This pipeline consists of IP and exclusive access to technology, formulations and discovery data for both consumer and pharmaceutical potential. It includes an exclusive license to ground-breaking research and development, headed by Professor Hinanit Koltai and based on extensive testing on malignant cell-lines and blood samples from patients with CTCL, and a platform of products based on active ingredients derived from the cannabis plant, which have demonstrated potential to treat Sezary Syndrome. Current medications for Sezary Syndrome do not cure the disease and often deliver only short-term remission for patients so development of new treatment options is crucial. MedC has partnered with Sana Healthcare to finalize the plan for key stakeholder participation, the design and execution of toxicology and clinical studies, and the strategy for regulatory approval, pricing and reimbursement requirements in the UK. Clinical execution will be aligned with funding following toxicology studies and have targeted availability of a post clinical report available the first half 2022. The information generated for the UK market will be leveraged for further development in global jurisdictions. MedC is currently raising funds to conduct safety and efficacy trials for a cannabinoid-containing product that is designed to treat CTCL Sezary Syndrome. This product would be considered an orphan drug in the USA and UK, with the potential for government financial considerations, supportive regulatory concessions, and eligibility for market exclusivity. The MedC/Sana partnership will work towards establishing orphan drug designation for this product in the UK, government reimbursement for patients and market exclusivity. Avi Drori; Founding Partner and CEO of MedC, said, "We are pleased that our continued efforts and our relationship with Sana Healthcare will advance our CTCL platform to the clinical development stage. We look forward to the clinical trials in 2021, so we can finally bring hope to patients seeking a cure for this terrible disease." Ben Hamburger; Founding Partner and CEO of Sana Healthcare, said, "We are extremely excited to be working with MedC. MedC has an outstanding leadership team and very promising pre-clinical data targeted towards a disease with a low survival rate and currently without a recognised cure. We look forward to a successful 2021 together. About MedC Biopharma MedC Biopharma is a Canadian science-driven, clinical-stage biopharmaceutical company. It focuses on the development, production, and delivery of differentiated products containing cannabinoid or other natural compounds for the medical, consumer and veterinary skin and general health markets. Connect with MedC Biopharma: www.medc.bio About Sana Healthcare Sana Healthcare is a subsidiary of Sana Life Science – a specialist importer, wholesaler and distributor of cannabis-based medicines, licensed by the MHRA in the UK. Sana Healthcare selects the most efficacious cannabis-based medicines for distribution in the UK market, supporting biopharmaceutical companies with the development and execution of the most appropriate clinical pathway. As part of a broad range of services Sana Healthcare is able to provide support across clinical trials, marketing authorisation and product reimbursement." Connect with Sana Healthcare: www.sanalifescience.com Press Contact: Avi Drori7024820341https://www.medc.bio View original content to download multimedia:https://www.prnewswire.com/news-releases/medc-biopharma-and-sana-healthcare-partner-to-advance-skin-oncology-platform-301205995.html SOURCE MedC Biopharma Corporation