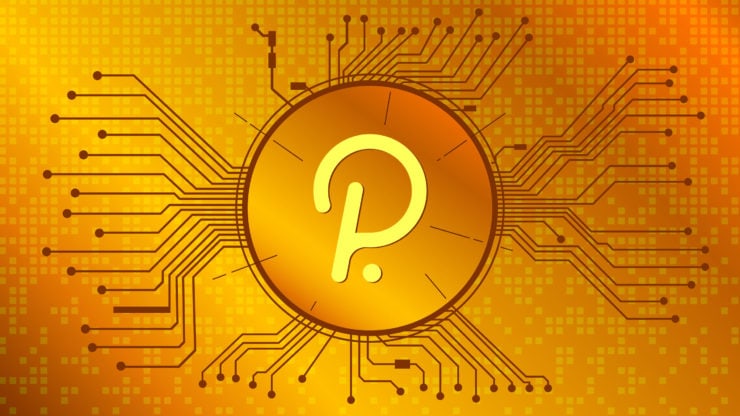 Polkadot (DOT) managed to outperform the vast majority of the crypto market by posting double-digit gains in the past 24-hours, inching closer to $10.

Polkadot has, after a major news-related price pump, started descending rapidly as a response to Bitcoin’s move down. However, Polkadot bulls managed to take over the market once again and continue the move up. DOT/USD has pushed the price up just over 20% in the past 24 hours.

Fundamental analysis: is Binance behind everything?

Polkadot is a next-generation blockchain protocol that aims to connect multiple specialized blockchains into one unified network. It was founded by the Web3 Foundation, namely Dr Gavin Wood, Peter Czaban, and Robert Habermeier. The idea was to design a web that returns control to individuals and takes it away from the internet monopolies. The project has a unique way of tackling the problems that all cryptocurrencies have, and is proud to call itself scalable, able to specialize, self-governed, and easily upgradeable.

DOT’s overall outlook is extremely bullish due for several fundamental reasons, with most of them being tied to the Binance exchange. Firstly the cryptocurrency announced that Binance would support the project with $10 million, which caused a massive boost in its price. On top of that, Binance exchange’s home page replaced the ETH/BUSD pair with the DOT/USD pair on their main page for a while, giving Polkadot a major boost in popularity and exposure. The combination of these two factors brought Polkadot’s price from just slightly above $5 way above $10.

DOT managed to gain 6.59% week-over-week. When compared to other cryptocurrencies, BTC scored a loss of 15.46%, while ETH managed to lose 14.22% over the same period.

Polkadot (DOT) broke out of its long-term trading range on 28 Dec. Bulls, encouraged by the recent news of Binance “joining the team,” started buying Polkadot pushed its price from a little above $5 to over $10. However, Bitcoin’s pullback ultimately caused DOT/USD to follow it to the downside, causing its price to retrace. Taking a look at the daily chart, we can see that the 21-day average has played a major role in the current trend reversal, while the 50% and 61.8% Fib retracements played a part as well. After creating a Doji candle yesterday, Polkadot started pushing towards its recent highs, which brought it to the current position.

DOT faces a strong resistance zone after around and a little above $10. On the other hand, the 21-day exponential moving average has shown to be an immense support level.

DOT’s RSI on the daily time-frame has slowly left the overbought area after it started descending, but is on the increase once again. Its RSI currently neutral, with a value of 62.81. 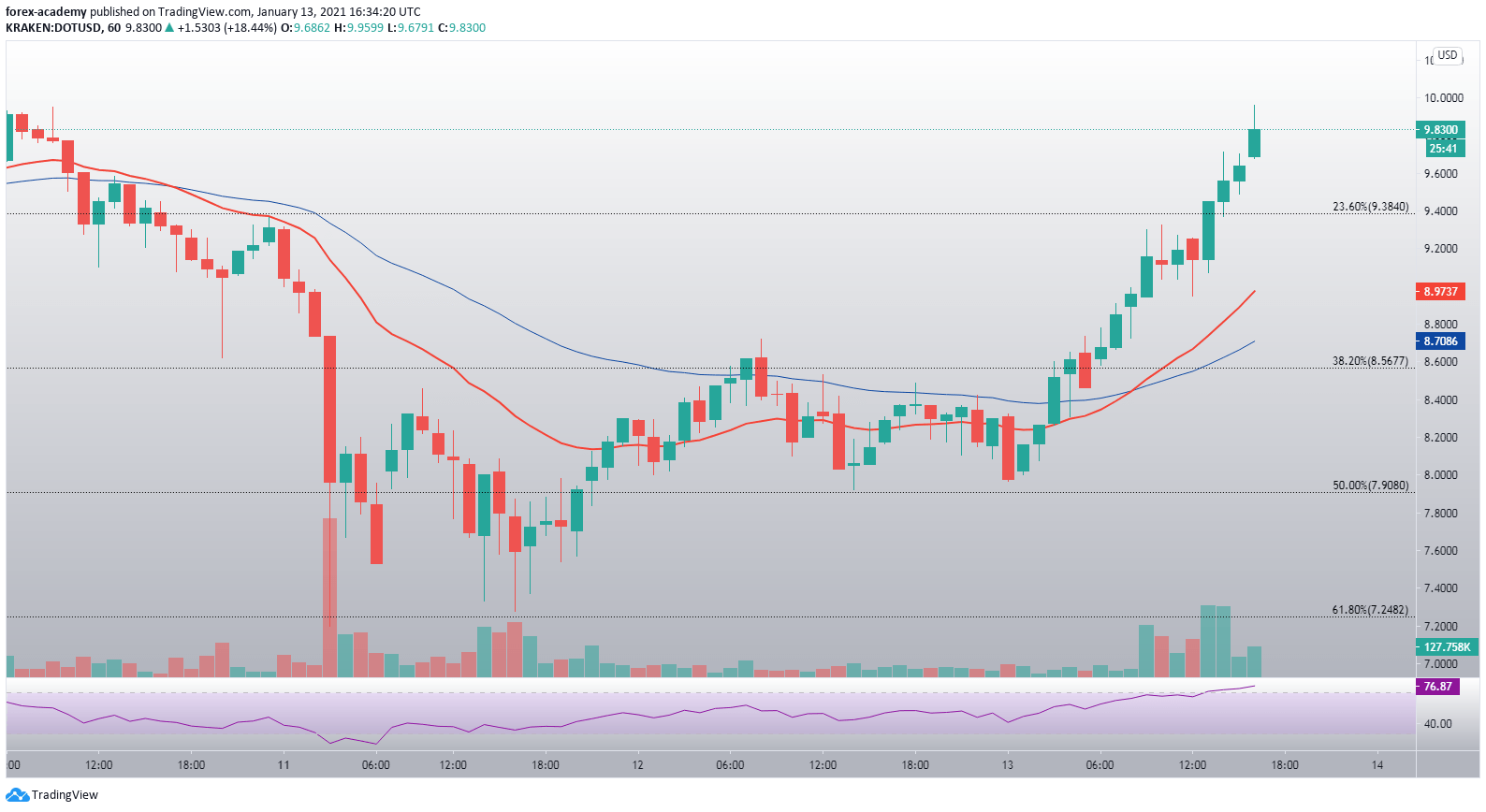 DOT’s hourly time-frame is slightly less important for the current outlook when compared to the daily time-frame. However, we can use it to see the current price increase a bit more clearly. It’s evident that the price responded to both the 21-hour and 50-hour EMAs, meaning that day-traders should take into account these two indicators into account when forming a trade idea. Another thing to note is that the 21-hour EMA has crossed over the 50-hour EMA, posting a bullish signal.

The post Polkadot records double-digit gains as it inches closer to $10 appeared first on Invezz.

Investing Pros And Cons Of A Blue Washington

Amazon-backed food delivery firm Deliveroo is now worth $7 billion after...

Investors Diurnal Team - December 30, 2020 0
Bitcoin (BTC) price touched yet another all-time high on Sunday, breaking above the $28,000 mark for the first time ever. However, some analysts suggest that the world’s biggest cryptocurrency could lose its momentum at the start of 2021. Fundamental analysis: Different opinions on the future price direction Mark Newton, founder and president of investment management firm Newton Advisors said Bitcoin could slow down in early January.  Are you looking for fast-news, hot-tips and market analysis? Sign-up for the Invezz newsletter, today. “It is still quite bullish on an intermediate-term basis given that it just broke out to new all-time highs,” Newton said.  “I think we have a ways to go. Near term, my cycle composite shows us peaking out in early January.” The cryptocurrency’s weekly chart and technical indicators point to a surge in interest, mostly among institutional investors, he added. Also, google search numbers for Bitcoin increased by 750% compared to the same period last year, but still far away from its peaks three years ago.  ″[With] SPACs right now, you can make money at 10, 15, 20% a day,” he said. “I just don’t think that investors have quite the appetite for crypto while the
Chainlink

Investors Diurnal Team - January 4, 2021 0
Chainlink (LINK) price recorded losses of over 21% in December but it has already managed to erase these losses in the first three days of trading in January.  Fundamental analysis: Utilization on Matic apps Chainlink published a new report on how its oracles can be utilized in Matic Defi applications. The article also covers how Chainlink’s price feeds can be used to help applications get access to tamper-proof and premium data, which is resistant to flash loan attacks and other oracle exploits.  Are you looking for fast-news, hot-tips and market analysis? Sign-up for the Invezz newsletter, today. Matic Network offers a powerful platform that is expected to boost mass adoption when it comes to DeFi applications. After its launch earlier this year, the network’s robust infrastructure helped it become a popular layer 2 solution. Moreover, Chainlink also gained significant exposure as the number one choice oracle network for decentralized finance protocols.  Its price feeds represent the top quality in-production solution for DeFi protocols that prevent exploits and attacks. Developers who want to use Chainlink oracles and price feeds on the Matic Network are required to link their MetaMask wallet to the Matic Mumbai testnet. This way, developers are also able
Cryptocurrency

Investors Diurnal Team - December 22, 2020 0
Ripple (XRP) price is trading about 9% lower today after the company confirmed it expects to be a subject of a lawsuit by the Securities and Exchange Commission (SEC). Fundamental analysis: Ripple facing serious allegations Ripple is facing allegations that it broke investor-protection laws, according to the company’s officials. Ripple’s chief executive Brad Garlinghouse and co-founder Chris Larsen said the company expects the SEC to file a lawsuit against Ripple for selling unregistered securities to traders. Are you looking for fast-news, hot-tips and market analysis? Sign-up for the Invezz newsletter, today. Ripple believes the SEC will file the lawsuit before Christmas, with Garlinghouse claiming the agency was “fundamentally wrong as a matter of law and fact”. “XRP is a currency, and does not have to be registered as an investment contract,” Garlinghouse added.  “In fact, the Justice Department and the Treasury’s FinCEN already determined that XRP is a virtual currency in 2015 and other G20 regulators have done the same. No other country has classified XRP as a security.” “The SEC has permitted XRP to function as a currency for over eight years, and we question the motivation for bringing this action just days before the change in administration.