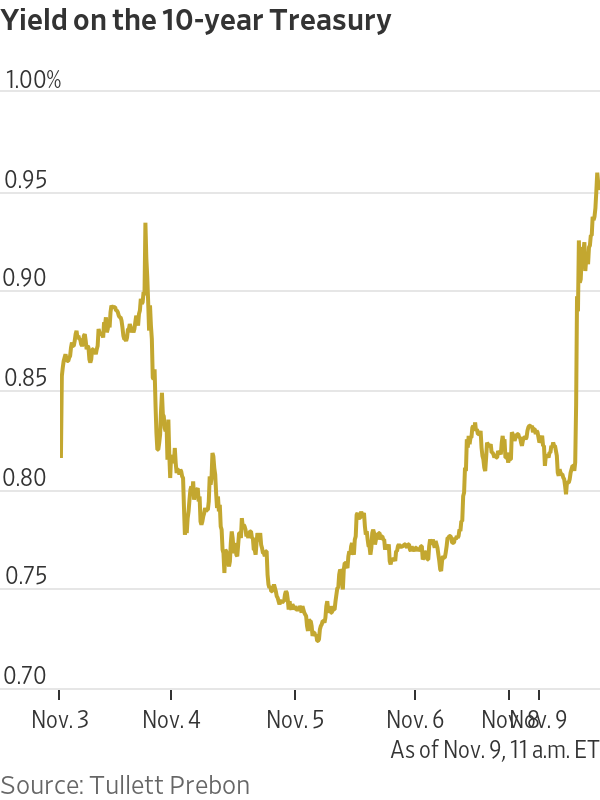 Hopes for an end to the coronavirus crisis drove U.S. government-bond yields to new multimonth highs on Monday, fueled by traders’ latest scramble to adjust positions after the presidential election upended months of bond-market calm.

Yields, which rise when bond prices fall, surged after
Pfizer Inc.
and
BioNTech SE
said they have jointly developed a coronavirus vaccine that is 90% effective, spurring hopes for widespread use in the near future.

The yield’s climb continues one of the bumpier rides since March, which began when changing expectations around the results of the U.S. elections and the prospects for fiscal stimulus sparked sharp swings in bond prices.

The prospect of a vaccine-fueled economic rebound could prompt portfolio managers to again unwind positions built up in recent sessions in what could be a messy move pushing yields above 1%, according to traders and asset managers.

“The risk-on reaction makes sense and Treasurys are along for the ride,” said James Athey, an investment manager at Aberdeen Standard Investments.

Yields have been kept in check by a lackluster economic outlook and the Federal Reserve’s efforts to stimulate the economy. Still, they began creeping up this fall in large part because investors were anticipating a strong election for Democrats that would allow them to pass trillions of dollars of new spending measures—potentially increasing the supply of bonds and lifting economic growth and inflation.

Behind the Market Surge

Join Wall Street Journal editors and reporters as they dissect how investors are recalibrating their expectations for stocks and the economy. Live Q&A starts at 4:45 p.m. ET

Propelled by those bets, the yield on the 10-year U.S. Treasury note briefly hit 0.94% on election night, its highest level since June. It then tumbled as low as 0.72% as traders prepared for a divided government, before regaining ground Friday—thanks in part to a better-than-expected jobs report and an election twist that still left some chance for Democratic control of both chambers of Congress.

The vaccine news only added to that recent spate of volatility, which has whipsawed some crowded positions in the bond market.

Guarding against the potential for more government spending under Democratic-controlled government, many investors reduced holdings of longer-term bonds relative to shorter-term debt, in what is known on Wall Street as a “steepener” trade.

As government and private money pour into the global race for a Covid-19 vaccine, drugmakers are under great pressure to keep the shot affordable while also keeping investors happy. WSJ explains what this means for the final price tag of the jabs. Illustration: Crystal Tai

“I believe that just about every hedge fund, even real money accounts, we were talking to was positioning that way for the most part, in one way, shape or form,” said Kevin Walter, co-head of global Treasurys trading at
Barclays
PLC. He said trading volumes on election night were seven times above average as investors unwound bets on a so-called blue wave.

Compared with other assets, U.S. government bonds were especially vulnerable to a surprise election result because of what additional fiscal stimulus would mean for the amount of new bonds entering the market, some analysts said.

Traders and investors say viable vaccines should depress demand for bonds by boosting the economic outlook. In a better economy, investors could be more likely to buy riskier assets over safer ones like Treasurys. Faster growth could also help lift inflation, increasing bets that the Fed could raise short-term interest rates sooner than previously expected.

“It’s a pretty significant rush into risk assets,” said Thomas Pluta, Global Head of Linear Rates Trading at JPMorgan Chase. “I am not sure the market was expecting such positive news to come so soon.”

Still, analysts said that there is a limit to how much yields could rise given current central-bank policies. In recent months, the Fed has signaled that it will leave short-term interest rates near zero until inflation exceeds its 2% annual target, which has rarely happened in the years since the financial crisis. The central bank also has been buying roughly $80 billion of Treasurys a month. Last week, Fed Chairman Jerome Powell said officials could adjust the program if needed to provide more support to the economy.

“Central banks around the world are continuing to increase the liquidity they have been providing,” said Matthew Hornbach, global head of macro strategy at Morgan Stanley. “The search for yield will make a return, limiting the degree Treasury yields could rise.”

—Anna Hirtenstein contributed to this article.

Experian says its pre-tax profit slid to £345.46 million in the fiscal first half

While You Were Sleeping: 5 stories you might have missed, Dec...

Aerospace and Defense Stocks Have Struggled to Take Off. It Might...