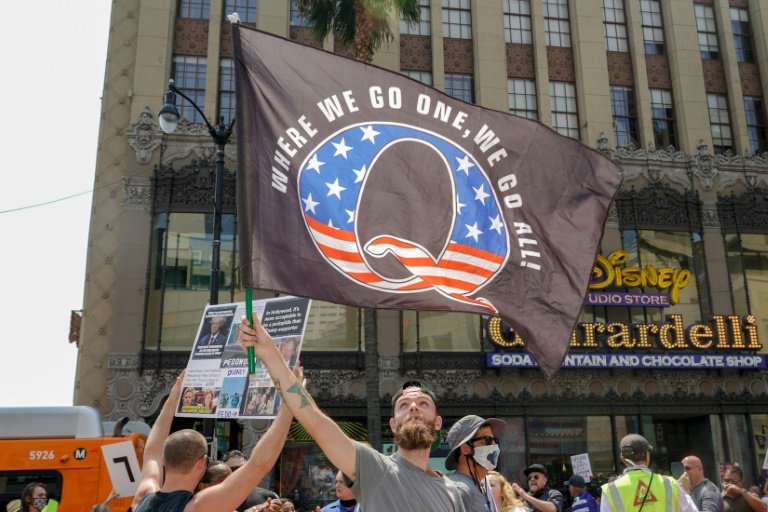 QAnon conspiracy theories have found believers in dozens of countries around the world during the coronavirus pandemic.

HONG KONG: Powered by fear, anger and big tech’s algorithms, the QAnon conspiracy movement has exploded from the US political fringe into the global mainstream during the pandemic.

Its influence can be seen at anti-lockdown and anti-mask rallies from Los Angeles, to London, Berlin and Melbourne — with protesters warning, without evidence, that the pandemic is a conspiracy by a cabal of satanist paedophiles who control the world.

Experts say QAnon has grown sharply during the pandemic because it acted as a binding force — mixing its core tenet with long-running conspiracy theories about vaccines and 5G mobile technology, anti-Semitic and white supremacist tropes, as well as far-right and libertarian politics.

“In some ways, the pandemic has created the perfect storm for conspiracy theories like QAnon to grow,” Mackenzie Hart, a disinformation researcher at the London-based ISD think tank, told AFP.

ISD’s analysis of QAnon-related posts on major social media platforms showed explosive growth between March and June this year — nearly 175% on Facebook, 77.1% on Instagram, and 63.7% on Twitter.

This rise happened as coronavirus infections were spiking around the world, forcing governments to tighten social distancing rules and impose lockdowns of varying intensity.

While QAnon content has remained most dominant in the United States, researchers have found related social media content originating from around 70 countries.

Many QAnon followers believe the coronavirus is a conspiracy to take away people’s liberties and control them using 5G and vaccines.

Some have branded it a “Plandemic”, accusing prominent figures such as Bill Gates, Hillary Clinton and even Tom Hanks of involvement.

Its adherents have offered no credible evidence for any of it.

The movement is based on cryptic posts that started appearing on the anonymous messaging board 4chan in October 2017 — later migrating to a similar site, 8kun — by a user named “Q Clearance Patriot”, who claims to be an American intelligence official with access to classified information.

Without proof, Q has said that a war is being waged by Donald Trump against the “deep state” and other elites, and his followers believe the US president is planning to go after his enemies — including the satanist paedophile cabal.

The messages, called “Q drops”, are then discussed and amplified on mainstream social media by adherents, some of whom have attempted to take matters into their own hands with threats of violence and murder, and even attempted assault and kidnapping.

The FBI has identified QAnon as among several conspiracy theories that could potentially lead to extremist violence.

But its pro-Trump followers have become increasingly visible, and have been regularly spotted at campaign rallies for the president.

“I don’t know much about the movement, other than I understand they like me very much, which I appreciate,” Trump said in August, describing QAnon followers as “people who love our country”.

Social media giants, who had been grappling with QAnon in the United States well before the pandemic, have now been forced to take even stronger measures as it has mushroomed into an international issue.

Their actions include tweaks to the recommendation algorithms that helped boost such content in the first place, according to tech analysts.

The firms all told AFP they have stepped up their vigilance. Some are especially monitoring for new hashtags and tweaked spellings meant to sneak past the filters.

But QAnon content is still rife online with the theories being fragmented and amplified by a bewildering array of powerful personalities who may not be fully aware of QAnon’s most outrageous claims.

These characters range from politicians and entertainers to celebrity chefs, wellness gurus and Instagram influencers.

In one recent example, QAnon hijacked legitimate anti-child trafficking hashtags and campaigns, using them to bombard social media with baseless theories and accusations.

This has led to seemingly well-intentioned online influencers promoting QAnon hashtags, and bringing the fringe theory of paedophile elites preying on children into the mainstream.

Experts warned that QAnon could cause serious damage to the fight against the pandemic by undermining confidence in an immunisation campaign.

“What we’re seeing is a globalisation of the anti-vaccine movement, the anti-science movement,” said Peter Hotez, a vaccine scientist at the Baylor School of Medicine.

“That would be an incredible threat to public health.”

Investors Diurnal Team - October 10, 2020 0
U.S. judge says Apple holds the right to ban Fortnite from its App Store. Apple Inc. ordered to restore Epic Games' developer account. The U.S. technology giant to unveil new iPhones on October 13th. In an injunction request on Friday, District Judge Yvonne Gonzalez Rogers (California) said that Apple Inc. (NASDAQ: AAPL) was within its rights to ban Fortnite from its App Store. The developer of the world popular video game, Epic Games, had filed in September for a preliminary injunction that sought to remove the ban on Fortnite from Apple’s App Store.    Apple also suspended Epic Games’ developer account in August – a move that as per the senior engineer Kevin Gammill of Microsoft could result in serious repercussions for the gaming industry at large. Are you looking for fast-news, hot-tips and market analysis? Sign-up for the Invezz newsletter, today. Apple ordered to restore Epic’s developer account The federal judge ordered the iPhone maker on Friday to not sabotage Epic’s developer tools, including “Unreal Engine” that is widely used in the development of hundreds of video games. Rogers said: “The Court maintains its findings from the temporary restraining order and hereby grants in part and denies in part Epic Games’ motion for a preliminary injunction.” Apple Inc. and Epic Games are yet to make an official statement on Friday’s ruling. Rogers also commented on Friday: “Epic Games has strong arguments regarding Apple’s exclusive distribution through the iOS App Store, and the in-app purchase (IAP) system through which Apple takes 30% of certain IAP payments.” But she said that Epic Games failed to sufficiently address counter-arguments made by the U.S. tech giant. Consequently, Rogers added, “The Equities, addressed in the temporary restraining order, remain the same.” Apple to unveil new iPhones on October 13th In related news, Apple is scheduled to unveil its latest range of iPhones in an event on October 13th. Under the leadership of its CEO Tim Cook, the American multinational technology company became the world’s first to have hit the milestone of $2 trillion market valuation. Shares of the company were trading a little under 1% up in extended trading on Friday. Including the price action, Apple Inc. is now exchanging hands at £90.43 per share versus a year to date low of £43 per share in late March when the Coronavirus pandemic weighed heavily on its global operations. Apple had started the year 2020 at £57.55 per share. Its performance was largely upbeat in the stock market last year with an annual gain of roughly 100%. At the time of writing, the Cupertino-based company has a price to earnings ratio of 35.56.
Tech

Investors Diurnal Team - October 14, 2020 0
Twitter forbids using the platform "to artificially amplify or suppress information or engage in behavior that manipulates or disrupts people's experience" on the platform. SAN FRANCISCO: Twitter said Tuesday it had suspended several fake accounts purporting to be African Americans who support President Donald Trump and which had succeeded in garnering several thousand followers in just a few days. "Our teams are working diligently to investigate this activity and will take action in line with the Twitter rules if Tweets are found to be in violation," said a spokesman for the San Francisco-based company. Darren Linvill, a professor at Clemson University who specialises in disinformation on social media, published some examples of the fake accounts on Twitter, accusing them of using "digital black face". "Yes IM BLACK AND IM VOTING FOR TRUMP!" said one of the examples he shared, under the name of Ted Katya on Sept 17. "Libs wont like that but I dont care!!!" The tweet was shared 6,000 times and "liked" more then 16,000 times. Most of
Tech

Investors Diurnal Team - October 10, 2020 0
The Chinese tech sector has benefited immensely from the country’s economic recovery E-commerce giant JD.com raised over £3 billion in its secondary listing in Hong Kong in June Pinduoduo is the fastest-growing e-commerce platform in China and has more active users than Pinduoduo Chinese tech giants have witnessed significant growth in the second half of the year so far despite the global Covid-19 pandemic that started in the world’s most populous country.  Rebound in progress The tech sector in China has benefited immensely from the country’s economic recovery following a shutdown of certain parts of countries due to the pandemic. Are you looking for fast-news, hot-tips and market analysis? Sign-up for the Invezz newsletter, today. “On the user behavior side (in China), the pandemic gave an impetus to the penetration of several major digitization businesses, helping some of them grow significantly to reach the necessary scale and achieve economic efficiency in a short time,” said Charlie Chai, an analyst at 86 Research. “On the other hand, a countervailing force is a cut in investment on the business side, as major industry leaders including BAT (Baidu, Alibaba, Tencent) prioritize margins amid a potentially turbulent economic and geopolitical environment.”  The COVID-19 outbreak initially started in January in China, forcing more than half of operations and businesses across the country to shut down. As a result, the country saw a 6.8% drop in growth in the first quarter.  This then led to a sharper recovery as domestic businesses began reopening in March, leading to a positive Q2 GDP (3.2%).   “Because of the virus, China is more hungry for technology than ever before,” said Abishur Prakash, a geopolitical specialist at the Center for Innovating the Future (CIF), a US consulting company.  “From health care to transportation to finance, projects are underway that will rewire China — and put technology at the heart of everything.”  2 Chinese tech stocks to buy JD.com The pandemic led to a surge in online shopping numbers. Physical stores were closed for weeks, which forced businesses to invest heavily in expanding their online presence. For this reason, among other factors, JD.com (NASDAQ: JD) seems well-positioned to benefit. In June, the e-commerce giant JD.com raised over £3 billion in its secondary listing in Hong Kong at a per-share price of £23. The company sold 133 million shares at a price of £23 per share. Just a few days after its secondary listing in Hong Kong, JD.com and Alibaba (NYSE: BABA) made combined sales of an unprecedented £110 billion on “618”, that is among the biggest annual shopping events in China. JD.com aline sold £30.62 billion worth of goods this year, higher than £22.96 billion in 2019. Pinduoduo Similar to JD.com, Pinduoduo (NASDAQ: PDD), an interactive shopping platform, is growing at a rapid pace. For instance, JD.com’s has 417 million annual active users, whereas Pinduoduo’s annual active buyers are reported at around 683 million. “In the future, there won’t be a distinction between online and offline as no business can do without technology. So how do we become a pioneer and leader in this new world is something that we ponder a lot on,”  ex-Google engineer and PDD’s founder Colin Huang said. Pinduoduo is the fastest-growing e-commerce platform in China. Summary As Chinese tech stocks have surged in Q2 and Q3, JD.com and Pinduoduo look well-positioned to yield strong growth in a post-pandemic economic rebound.