The new 5G iPhones are a clear boon for
Qualcomm.
And luckily for the chip maker, it now has more to its story.

Both were on sharp display in Qualcomm’s fiscal fourth quarter report late Wednesday. Revenue from the sale of chipsets for smartphones and other devices soared 38% year over year to nearly $5 billion for the quarter ended Sept. 27, while the midpoint of the company’s projected range for the December quarter reflects an 80% surge—the highest growth rate for that segment in at least a decade. This is the quarter that will include the launch of
Apple Inc.’s
new iPhone 12 models, which will mark Qualcomm’s return to the pioneering smartphone following years of shutout as the two companies battled in the courts. 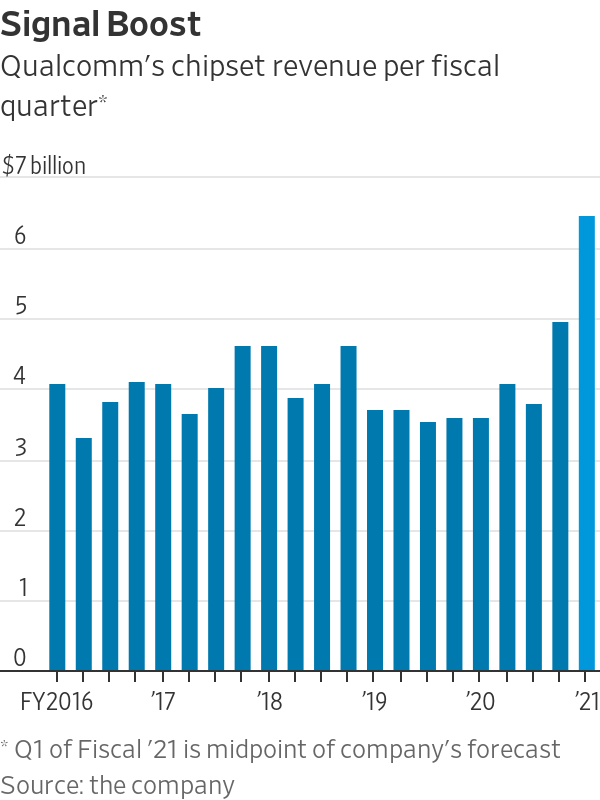 That dispute was settled last year, making Qualcomm’s inclusion in the new iPhone lineup a well-known benefit before the report. But the boost was much larger than Wall Street was anticipating—helped by Apple’s surprise decision to include the more expensive millimeter wave 5G format in all of the iPhone 12 models destined for the U.S. market. Qualcomm’s results and forecast were thus well above Wall Street’s projections, sending the stock up more than 13% Thursday.

But Qualcomm now has more going for it than just getting a piece of the latest iPhone. The company’s settlement with Huawei earlier this year removed the last major holdout on its licensing business. Another legal hurdle got cleared up last month, when a federal appeals court turned down a request from the Federal Trade Commission to reconsider its decision to effectively toss out the government’s antitrust case against Qualcomm. That leaves the FTC with only the long-shot option of taking the matter to the Supreme Court.

The company is also broadening its chipset exposure beyond the iPhone’s modem slot. The fourth-quarter results were the first in which Qualcomm has broken out sales to other chip-market segments, such as radio-frequency components for smartphones as well as chips used in autos and Internet of Things applications. The latter two alone generated nearly $3.7 billion in revenue in Qualcomm’s latest fiscal year. Given how relations with Apple can turn contentious, it helps to have more diversity in the basket.

Uber and Lyft's Victory Lap May Be Fleeting

Covid-19 and the business of crowds

Dow on Track to Finish Best Month in Over Three Decades

Investors Diurnal Team - November 29, 2020 0
WASHINGTON — Nike and Coca-Cola are among the major companies and business groups lobbying Congress to weaken a bill that would ban imported goods made with forced labor in China’s Xinjiang region, according to congressional staff members and other people familiar with the matter, as well as lobbying records that show vast spending on the legislation.The bill, which would prohibit broad categories of certain goods made by persecuted Muslim minorities in an effort to crack down on human rights abuses, has gained bipartisan support, passing the House in September by a margin of 406 to 3. Congressional aides say it has the backing to pass the Senate, and could be signed into law by either the Trump administration or the incoming Biden administration.But the legislation, called the Uyghur Forced Labor Prevention Act, has become the target of multinational companies including Apple whose supply chains touch the far western Xinjiang region, as well as of business groups including the U.S. Chamber of Commerce. Lobbyists have fought to water down some of its provisions, arguing that while they strongly condemn forced labor and current atrocities in Xinjiang, the act’s ambitious requirements could wreak havoc on supply chains that are deeply embedded in
Economy

Reinventing Workers for the Post-Covid Economy

Investors Diurnal Team - December 1, 2020 0
Rob Siminoski has been in the theater, in one way or another, since he graduated from college. But after 10 years at the Universal Studios theme park in California, he is only No. 13 on the stage-managing roster. Even if the park, closed since March, reopens some attractions — the WaterWorld stunt show, say, or the Nighttime Lights at Hogwarts Castle — he is unlikely to be among the first to get the call.His luck is that his union, the International Brotherhood of Electrical Workers, offers an apprenticeship program for on-set movie electricians. It takes five years, and Mr. Siminoski, 33, is going to have to brush up his high school algebra to get in. Still, it offers a good balance of risk and reward.“Everyone needs electricity,” he said. “You pull down six figures.”The nation’s economic recovery from the Covid-19 pandemic will hinge to some extent on how quickly show managers can become electricians, whether taxi drivers can become plumbers, and how many cooks can manage software for a bank.The labor market has recovered 12 million of the 22 million jobs lost from February to April. But many positions may not return any time soon, even when a vaccine is