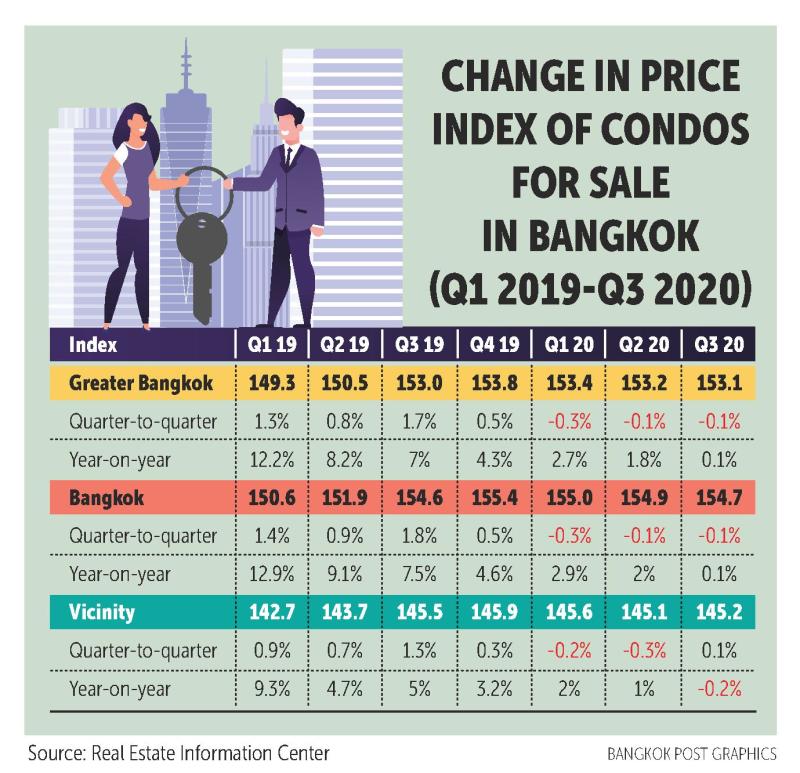 The housing price index in Greater Bangkok saw a continued drop in the third quarter as developers continued using discounts and campaigns to boost sales, according to the Real Estate Information Center (REIC).

Vichai Viratkapan, REIC acting director-general, said the condo price index in the third quarter of 2020 meandered in a downward trend with a quarterly decrease of 0.1% to 153.1 despite a rise of 0.1% from the same quarter last year.

“The condo price index in the third quarter has dropped for three consecutive quarters since peaking in the fourth quarter last year,” he said. “The key factor was the pandemic, which dampened condo demand and the purchasing power of end users, investors and foreigners.”

In provinces surrounding Bangkok, the index dropped 0.2% from the third quarter last year to 145.2 but rose 0.1% from the second quarter of 2020.

Mr Vichai said the most popular campaign among developers was freebies including furniture and electric appliances, which accounted for 46.8%, followed by cash discounts (34.6%) and waivers of expenses on transfer dates (18.6%).

The low-rise housing price index in Greater Bangkok in the third quarter saw a drop of 0.2% to 128.1 from the second quarter of 2020, but was up 0.9% from the same period last year.

“The decrease for two consecutive quarters in the low-rise housing price index derived from a rise in new supply launched as many developers directed their efforts to this segment, driving them to offer promotions to attract homebuyers,” he added.

The low-rise house price index in Bangkok saw an uptick of 0.8% to 127.1 when compared with the previous year, but the quarterly index fell 0.2% from the previous quarter.

In provinces surrounding Bangkok, the low-rise house index increased 1.2% to 129 year-on-year but fell 0.1% from the previous quarter.

The promotions offered houses sold in the third quarter were mostly cash discounts (35.4%), followed by free home appliances (33.7%), while the other 30.9% comprised fee waivers on transfer dates or waivers on common area expenses.

Metro Inc says its sales came in 7.4% higher in the fiscal fourth quarter

Payments Companies Give Credit Where It's Due—to Debit

US to approve 737 Max return as Boeing faces strong headwinds

Investors Diurnal Team - October 29, 2020 0
The coming deluge The increase in office supply will prove a greater challenge than remote working policies, with an upgrade in standards a likely necessity The need to control costs has been more of a drag on the office market than work-from-home policies. (Photo: Varuth Hirunyatheb) Despite being the most resilient property sector, the Bangkok office market is being challenged by economic uncertainty during and after the coronavirus pandemic, with an influx of future supply either planned or under construction. Yupa Sathienpabayut, head of office leasing at property consultant JLL Thailand, said demand for office space in Bangkok this year has softened slightly. "The slowdown in demand has been exacerbated by the immediate need for corporations to put a greater focus on cost control, which is more of a drag than the work-from-home trend," she said. Ms Yupa said leasing activity has been dominated by renewals. Most companies have put their office
Real Estate

Investors Diurnal Team - October 29, 2020 0
Branding health As more customers look to branded residences for a retreat or second home away from urban hustle, well-being needs to be a focal selling point Villa Thana, one of four models at Banyan Residences Villas Hua Hin. As the world faces a global health crisis head-on, more people are conscious of well-being and are trying to prevent chronic diseases. Many lifestyle industries have adapted their products and services to this customer demand, including branded residences, often looked at as second homes for buyers looking for a retreat. A property consultant thinks such residences need to put more effort into emphasising this strength to customers. Developers and operators in this segment are stepping up their health and safety measures to attract residents who prioritise healthy living and want standardised well-being support. In 2019 and 2020, the number of branded residence units in Bangkok is expected to increase by three times to more than 1,300 units, up from 449 in 2017, according to property consultant CBRE Thailand. The trend was