Thirteen years ago, Margie Owen of Atlanta had a large tax-deferred account that she intended to leave to her children someday.

The retired educator didn’t want to create a tax burden for her heirs. So each year, she has taken a chunk of her tax-deferred money, paid taxes on it and converted it to tax-free Roth IRA money. Almost two-thirds of her investments now are in the Roth account, and her children won’t pay a dime of taxes when they take the money out in the future.

“I’m older and have everything I need,” says Ms. Owen, 74 years old. “The Roth has turned out to be wonderful thing to do for my children.”

In Roth conversions, people pay income tax on each dollar they convert. The conversions can make particular sense for early retirees who want to avert higher taxes in the future for themselves or their heirs.

If you have a tax-deferred account, you must begin taking required minimum distributions at age 72. Those distributions—even if you don’t need the money—can push you into a higher tax bracket or force you to pay higher Medicare premiums. By contrast, withdrawals from a Roth aren’t taxed and you won’t have any required distributions. It is a tax-free money bucket that you can tap whenever needed or leave as a legacy.

There has been a flurry of Roth conversions this year, financial advisers say. Many investors took advantage of the pandemic-induced market decline this spring to do big Roth conversions and pay less tax on reduced asset values. 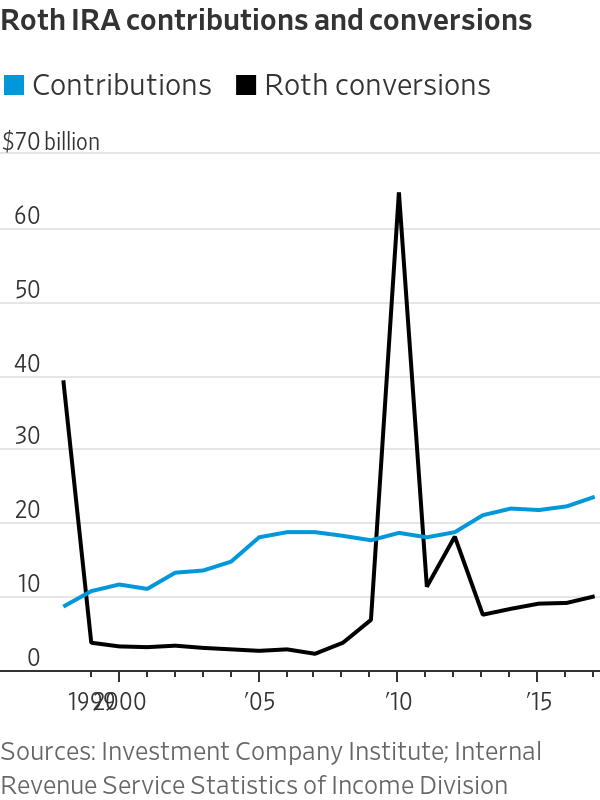 “There’s a strong incentive to get money out of a traditional IRA into a Roth so it’s not a time bomb blowing up for people,” says financial adviser David Maurice of Johnson City, Tenn.

In Ms. Owen’s case, she hopes to leave the entire Roth account to her children. She plans to live off other savings and distributions from the remaining money in her tax-deferred account, which is conservatively invested—80% in bond funds. Meanwhile, her Roth account is aggressively invested—80% in stock mutual funds, to maximize its growth, says Alicia Sher, Ms. Owen’s financial adviser at Bluerock Wealth Management.

“This is not money she is going to need to touch,” says Ms. Sher.

In a Roth conversion, pretax dollars are converted to after-tax dollars. In the simplest type, an in-kind conversion, you notify the custodian of your account that you want to move assets, say $50,000 of S&P 500 index fund shares, from your tax-deferred account to your Roth account on a particular day.

When you file your taxes next year, all of the money you converted is treated as ordinary income.

Patrick Rush, the 44-year-old chief executive of Greensboro, N.C.-based Triad Financial Advisors, says his firm did a lot of Roth conversions earlier this year for clients after the stock market shed a third of its value amid pandemic fears.

Mr. Rush himself did a $200,000 Roth conversion of stock mutual funds during the market downturn even though he is in the 37% tax bracket and it cost him approximately $85,000 in federal and state taxes. The funds he converted have now bounced back to around $320,000, above where they were before the market decline. If Mr. Rush had left the money in a tax-deferred account, those gains would be taxed in the future. But all the money he or his heirs take out of the Roth in the future will be tax-free.

While market declines can make Roth conversions more enticing at any age, seniors with low taxable income but bulging tax-deferred accounts ought to do them every year before they hit age 72 and begin required minimum distributions which can push them into a higher tax bracket, advisers say.

Michael Gibney, a wealth manager in Westwood, N.J., has a 65-year-old client who retired last year with low taxable income and a $1 million tax-deferred account. Mr. Gibney will be working with the client’s accountants to figure out the maximum the client can convert for the next seven years and still remain in the 12% tax bracket.

Roth conversions are also a good option for people who are still working and have variable incomes. James Bassett, a New York City financial adviser, has a 57-year-old client who helps companies hire executives. She has a $1.2 million tax-deferred account. Her income this year will be down, so she is doing a large Roth conversion to take advantage of the low tax rates.

She plans to retire in a couple of years, and will be making more Roth conversions after she does, Mr. Bassett says.

Roth conversions don’t make sense for everyone. People who expect their future tax rates to be lower than they are now are generally better off leaving the money in a tax-deferred account. Others may be planning to leave their tax-deferred account to a child with a low tax rate.

“I had to talk one client out of it who was planning on doing a Roth conversion to leave his kid tax-free money,” says Jim Bradley, a financial adviser in Bangor, Maine. In this instance, the client’s child is a social worker, doesn’t earn a lot of money, and won’t be paying high taxes if she inherits a tax-deferred account.

Brandon Jones, a financial adviser in the Minneapolis area, says people need to take a careful look at the entire financial picture before making a decision to go ahead with a Roth. Consider middle-income retirees who are already collecting Social Security. In a certain income range, each additional dollar of income causes 85 cents of Social Security to be taxed, Mr. Jones notes. That could make a Roth conversion, which boosts current income, more expensive than it appears at first glance.

He adds: “I’m definitely a fan of Roth conversions. They still make sense in a lot of cases.”

Mr. Templin is a former reporter and editor for The Wall Street Journal who lives in New Jersey. He can be reached at reports@wsj.com.

Here’s who Joe Biden brought in to focus on racial gap as he fills...

Trump not conceding is an embarrassment: Joe Biden

Political Gridlock Is Supposed to Be Good for Stocks. The Data...

Investors Diurnal Team - November 8, 2020 0
Political gridlock is generally thought to be good for the stock market, with neither Democrats nor Republicans receiving a broad mandate from voters that would lead to extreme policy changes. It was certainly good for stocks last week. The S&P 500 rose 7.3%, its best weekly gain since April, ahead of Democrat Joe Biden taking the White House and Democrats and Republicans potentially splitting control of Congress. In the long run, though, there is little evidence gridlock has an effect on stock returns. Since the 1928 election, there has been virtually no difference in the annual return of the S&P 500 in years when one party controlled Washington versus periods when power was split. In fact, the index has slightly outperformed when control of the presidency and Congress has been unified under one party. In the 45 years that the same party controlled Congress and the White House, the average return on the S&P 500 was 7.45%, according to Dow Jones Market Data. In the 46 years that power was split, the average return was 7.26%.