Talk about being in the right place at the right time.

Amid the Covid-accelerated shift from brick and mortar stores to online shopping, cloud commerce platform
Shopify Inc.
continues to clean up. After a huge second quarter which helped propel the company to its stratospheric $125 billion market value, Shopify’s latest results suggest it might just be getting started.

The first word on what Wall Street is talking about.

Third-quarter revenue grew by 96% year-over-year, handily beating analysts’ estimates, while gross merchandise volume continued to grow by over 100%. Monthly recurring revenue was especially strong in the quarter, bolstered by merchant conversions from free trials earlier in the year. Shopify said it saw a record number of merchants become paid subscribers in the quarter, even excluding those who converted following 90-day free trials. 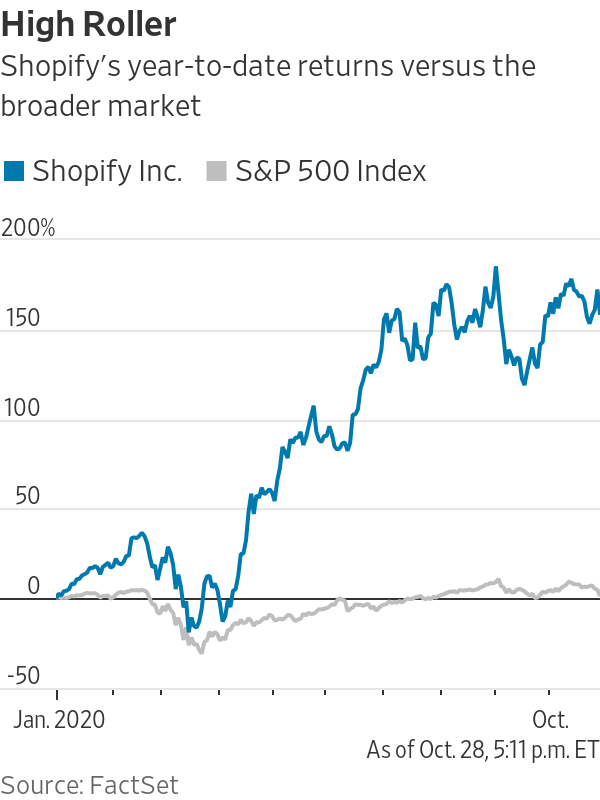 Despite the strong quarter, management didn’t provide fourth quarter guidance, noting its results will depend on “particularly fluid” variables such as unemployment, fiscal stimulus and the magnitude and duration of the pandemic, all of which it said could impact shop creation and consumer spending. Shopify shares fell slightly in early morning trading, despite the strong beat, but are up over 160% this year.

Investors shouldn’t fret. With another pandemic wave already hitting the U.S., the fourth quarter holiday season should be Shopify’s for the taking as consumers steer clear of physical shops. The company said it has already seen evidence that the traditional Black Friday/Cyber Monday weekend is extending and “becoming an entire season.”

It expects most consumers to do the majority of their holiday shopping online this year. While that could lead to some supply chain and logistics constraints, order delays are something both consumers and retailers have already become well accustomed to this deep into the pandemic. Monthslong delays for delivery of Peloton hardware, for instance, certainly haven’t hurt its demand or its share price.

Citi Research analyst Walter Pritchard noted that, while the outlook for Shopify remains unclear, Wall Street’s estimates “likely have a long way to come up,” given the company’s sustained pace of merchant additions and revenue growth. Indeed, despite Shopify’s recent growth, the market opportunity continues to look vast: Shopify says last year it accounted for just under 6% of U.S. retail e-commerce sales compared with
Amazon
at roughly 37%.

With shares down slightly for a change, investors should take advantage of the sale while it lasts. 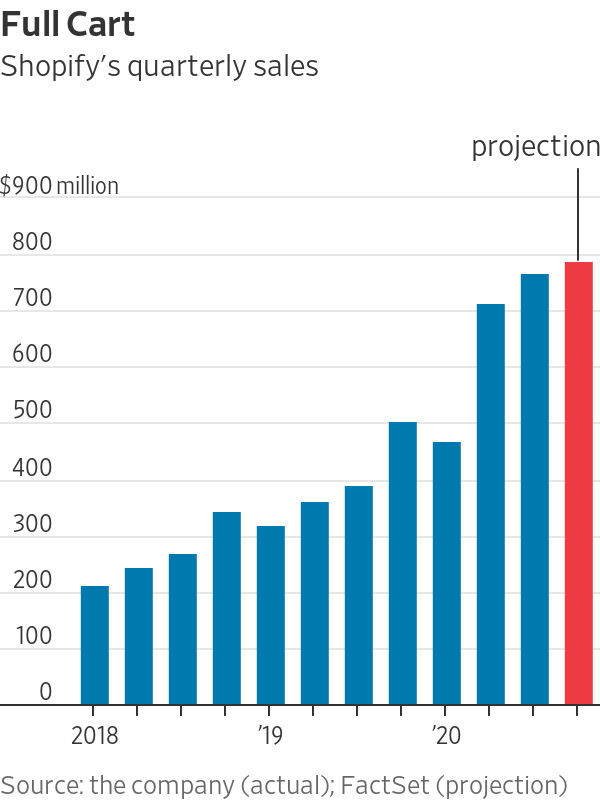 Write to Laura Forman at laura.forman@wsj.com

Rumblings of racism at a famous civil-rights law firm highlight the lack of diversity...

What Stays and What Goes in a Post-Covid-19 World

Tesla, T-Mobile, Ra Medical Systems: What to Watch When the Stock...