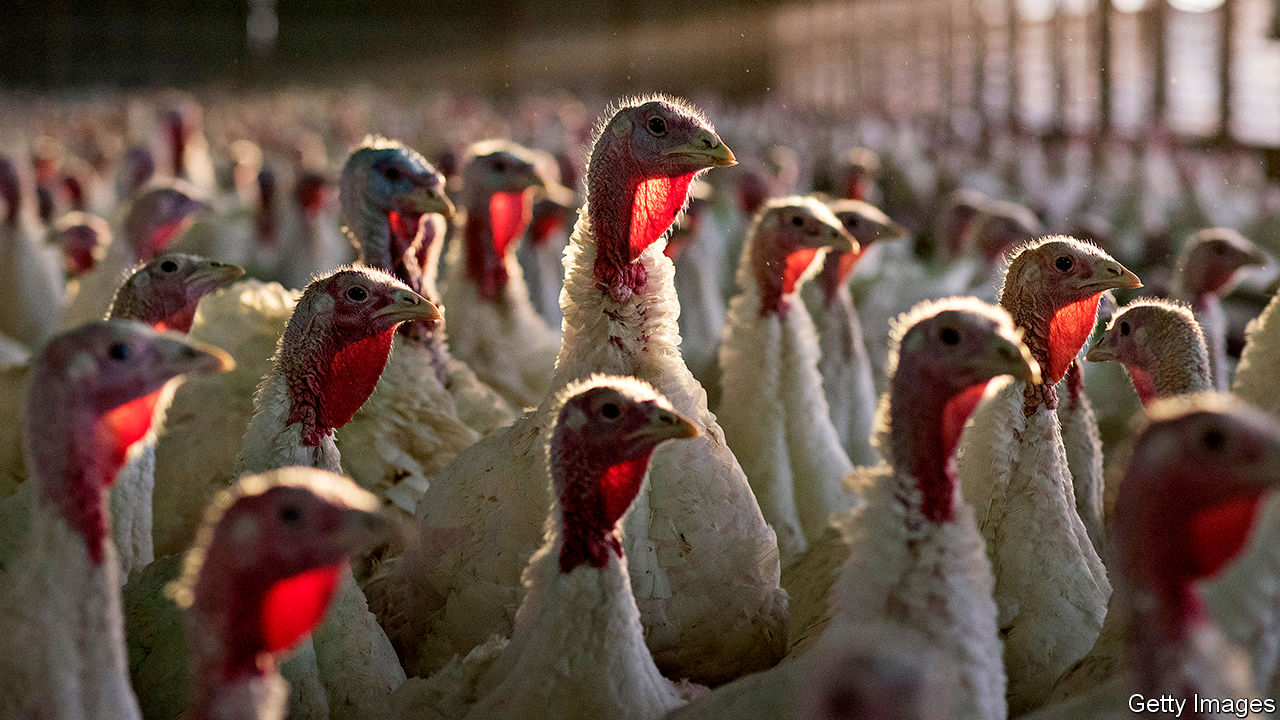 IN BARNS OR pens, or already in freezers, 40m American turkeys await their fate. More than half of the whole turkeys sold in America each year are eaten over Thanksgiving, which this year falls on November 26th. Most of the rest are polished off the following month, at Christmas. Social-distancing rules and travel restrictions mean that celebrations will look rather different in 2020—and so will the market for meat.

Some 30% of Americans say they will spend Thanksgiving with their immediate family only, up from 18% last year, according to Butterball, a North Carolina firm which rules the roost of turkey producers, supplying one in three Thanksgiving birds. Flight bookings for November are a third lower than last year, reports Skyscanner, a search platform, suggesting fewer people are going home for the holidays. In Britain, where 9m turkeys are usually eaten over Christmas, 61% of people say they are less likely than usual to have guests on Christmas Day, according to Kantar, a data firm.

Birds bred to feed large gatherings are therefore out of favour. Walmart and Kroger, large American food retailers, both plan to offer more small turkeys. However, “a lot of supply for the holidays is locked in well before the fall,” says Beth Breeding of America’s National Turkey Federation, an industry group. It is too late for producers to switch to daintier varieties, since a hen takes 14-16 weeks to mature from hatchling to main course. Changing a bird’s diet or the temperature of its surroundings can reduce its size, and it can be slaughtered earlier. But many Thanksgiving turkeys have already been dispatched and frozen, to fatten up inventory for the “Super Bowl” of the turkey calendar, as a Butterball spokesman describes it.

Some consumers may therefore end up buying spare parts cut from big birds. Walmart plans to increase by 20-30% its stock of breast meat, for families who can’t manage a whole turkey. Such cuts command a premium but may mean that the leftover dark meat goes unsold. “Whole birds are easier to produce and with no waste, so producers like them,” says Richard Griffiths of the British Poultry Council. Some farmers are in a flap at the prospect that turkey could lose out to more petite meats. Kroger is buying in more ham, beef, pork-roast and seafood, as well as vegetarian “meatless roasts”.

Yet the signs are that most consumers want to stick to tradition. Although millions of people accustomed to their mother’s cooking will have to fend for themselves this year, convenience products will mostly stay on the shelf, believes Scott McKenzie of Nielsen, another data company. Lockdowns have encouraged homely hobbies: Americans are buying 81% more yeast than last year and 41% more seaweed for wrapping home-made sushi, Nielsen reckons. Mr McKenzie expects increased demand for “made-from-scratch” products over the holidays, and beyond: “Homebody habits are here to stay,” he believes. If that is true, the glut of large turkeys may have a happy outcome: more leftovers. ■

Editor’s note: Some of our covid-19 coverage is free for readers of The Economist Today, our daily newsletter. For more stories and our pandemic tracker, see our hub

This article appeared in the Business section of the print edition under the headline “Gobble, gobble?”

Investors Diurnal Team - November 18, 2020 0
TJX tops analysts’ estimates for earnings and revenue in fiscal Q3. The retailer to reinstate 19.56 pence per share of dividend in Q4 TJX refrains from giving guidance due to the COVID-19 uncertainties. The TJX Companies Inc. (NYSE: TJX) published its financial results for the fiscal third quarter on Wednesday that topped analysts’ estimates for earnings and revenue. The company also expressed confidence that it will declare a dividend next month. The company shares jumped 3.4% in premarket trading. TJX closed the regular session about 1% up on Wednesday, becoming a winning stock – that you can learn how to pick here. On a year to date basis, TJX is currently 3% up in the stock market after a massive 70% recovery since its low in March due to the COVID-19 disruptions.   Are you looking for fast-news, hot-tips and market analysis? Sign-up for the Invezz newsletter, today. TJX Q3 financial results versus analysts’ estimates TJX said that net income in the third quarter came in at £652.19 million that translates to 53.43 pence per share. In the comparable quarter of last year, its net income was capped at a lower £623.30 million or 51.17 pence per share.
Business

Amazon staffers not happy with ‘turkey vouchers’ as new hires get...

Investors Diurnal Team - November 24, 2020 0
Amazon has upset some of its veteran workers by giving them vouchers to buy Thanksgiving turkey while cutting $3,000 bonus checks for some new hires, a new report says.
Business

Investors Diurnal Team - November 24, 2020 0
IN THE DAYS before Thanksgiving two top contenders emerged to take over Simon & Schuster, the fifth-biggest English-language book publisher by revenues, from ViacomCBS, an American media group. On November 25th Bertelsmann gained the upper hand. With an offer of $2.2bn the German parent of Penguin Random House (PRH), the number one by a Tolstoyan margin, outbid News Corp, Rupert Murdoch’s media group that counts HarperCollins, ranked third, in its catalogue of assets. A merger with Simon & Schuster would give PRH almost one-third of English-language book sales (see chart). That is more than double the market share of its closest rival, Hachette Livre, owned by Lagardère, an ailing French conglomerate. (Vivendi, a French group that is Lagardère’s biggest shareholder, also briefly vied for Simon & Schuster.) In America the merged biblio-behemoth would control 70% of the market for literary fiction. Authors and agents worry that the enlarged PRH may become ever more dominant in distribution—and that market concentration could lead to an excessive focus on bestsellers such Michelle Obama’s memoir of her time as America’s first lady (which was published by a PRH subsidiary) at the expense of niche titles that