U.S. stocks fell on Tuesday, weighed down by weakness in the shares of technology and social-media giants.

The Dow Jones Industrial Average dropped 0.1% in midday trading, after wavering between small gains and losses in the morning. The S&P 500 declined 0.4%, while the technology-heavy Nasdaq Composite was down 0.3%.

All three indexes closed at record highs on Friday but have retreated since the start of this week.

Investors broadly expect stocks to rally this year as the rollout of vaccines and fresh government spending help the economy recover from the disruption caused by the pandemic. Still, some are bracing for volatility in the coming months amid risks stemming from high valuations in parts of the stock market, still-elevated coronavirus case rates and political uncertainty following last week’s attack on the Capitol.

In the coming days, money managers will parse quarterly results as earnings season gets under way among U.S. companies. Home builder KB Home is due to report after markets close. Other companies set to report results later this week include Delta Air Lines and JPMorgan Chase.

“There is an expectation for an earnings recovery compared with last year, which is quite important,” said

Maria Municchi,
multiasset portfolio manager at M&G Investments. “The stimulus we have seen is certainly supportive to some of this earnings growth.”

In Washington, Congress careened toward a fresh showdown with President Trump. House Democrats said they plan to vote on impeaching him Wednesday over accusations he incited supporters to storm the Capitol.

The clash could lead to some swings in stock prices in the short term but ultimately has limited implications for investors, according to Ms. Municchi. “Compared to the pandemic situation and the need for resolution, this is almost a side show,” she said.

Some big technology and communications stocks continued to decline after sharp drops on Monday.
Facebook
shares fell 2.2%, while
Twitter
slid 2.5%. The social-media giants have taken increasingly tougher actions to block Mr. Trump’s accounts and stem misinformation and incitements to violence ahead of President-elect
Joe Biden’s

Meanwhile Google shares declined 2.2%, while Apple was down 1.2%. Both tech giants recently removed Parler, a social-media service popular among conservatives, from their app marketplaces amid concerns that it was being used to promote violence.

Such actions have raised jitters that Big Tech could face new regulation, particularly with Democrats set to take a narrow majority in the Senate, said

Olivier Sarfati,
head of equities at GenTrust. “They are a lot more at risk after the Capitol Hill riot than prior,” he said.

Six of the S&P 500’s 11 sectors were down on Tuesday, including technology and communications. Energy and financials were among the sectors in positive territory.

In other corporate news, Tesla shares jumped 5.5% after local media reports said the electric-car maker is in talks to join with
Tata Motors
to build out its business in India.

Expectations of higher government spending and more bond sales continued to drive a selloff in U.S. government bonds, pushing the yield on 10-year Treasury notes up to 1.172%, from 1.131% Monday. The move put yields on course to rise for a seventh consecutive trading session. Yields move in the opposite direction of bond prices.

House Democrats introduced a resolution Monday calling for Vice President Mike Pence to use the 25th Amendment to the U.S. Constitution to remove President Trump from office. Photo: C-SPAN

The Treasury Department is due to auction $38 billion in 10-year notes Tuesday and $24 billion in 30-year bonds Wednesday, seen as tests of market sentiment. On Monday, it sold a record $58 billion in three-year notes.

The advance in bond yields threatens to knock down shares of tech giants and other stocks that have benefited from a long period of low interest rates, investors said. The rising yields may also prompt the Federal Reserve to take action to prevent further gains, they said.

“If you were to get an uncontrolled selloff on the bond market, that would have a very negative impact for the rest of the economy and for the equity market,” said

Gerard Fitzpatrick,
global head of fixed income at Russell Investments. Mr. Fitzpatrick added that he thinks that is unlikely, though.

Oil extended its recent rally, which has been driven by a global recovery in fuel demand and continuing production cuts by the Organization of the Petroleum Exporting Countries. Futures on Brent crude, the benchmark in international energy markets, rose 1.5% to $56.50 a barrel. 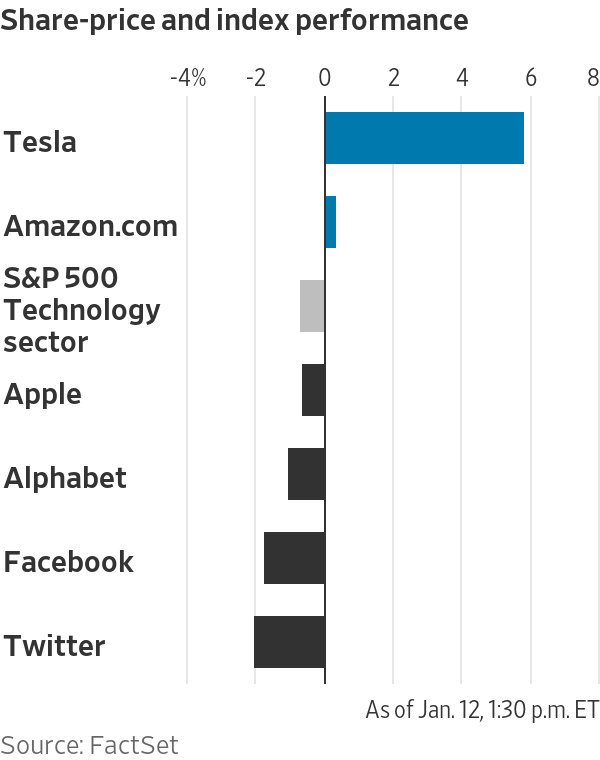 —Alexander Osipovich contributed to this article.

Write to Joe Wallace at Joe.Wallace@wsj.com and Alexander Osipovich at alexander.osipovich@dowjones.com

The Century Crammed Into a Year Mercifully Ends

The most powerful production BMW ever made will arrive in the...

Lessons From a Crazy Year in Financial Markets

Investors Diurnal Team - December 31, 2020 0
Here is something many investors would have found difficult to believe during March’s stomach-churning selloff: 2020 would turn out to be a stellar year for the stock market. The Dow Jones Industrial Average is at a record. The market for initial public offerings is flourishing. Just weeks ago, home-rental startup Airbnb Inc. made a stock-market debut so stunning that its chief executive was briefly left speechless on live television. These are things that would be easy to imagine in boom times. But 2020 has been anything but that for the world outside Wall Street. The cold reality is that the market’s rally has occurred in the midst of a catastrophic pandemic that has killed more than a million people, halted business and travel and wreaked havoc on the economy. Although there are plenty of reasons for the market’s comeback, not the least of which is the Federal Reserve’s massive intervention, the staggering rally is still difficult to comprehend for many investors. “The path we took to get here is something we never, ever, ever would have foreseen,” said Ralph Bassett, head of equities for North America at
Economy

A Long, Lonesome Look at America

Investors Diurnal Team - January 11, 2021 0
Twilight falls over a county road in Crook, Colorado.Flags billow along an empty sidewalk in Martin, Tennessee.In Detroit, Oregon, the wreckage from a wildfire sits beneath burned-out hills.These photographs were taken on a 10,000-mile road trip across the United States.They reflect our country’s beauty, loss, confusion, hope, division, grace and grandeur.They’re scenes of an America cloaked in solitude — and of a country on edge.Supported byContinue reading the main storyThe World Through a LensA Long, Lonesome Look at AmericaJan. 11, 2021, 5:00 a.m. ETI was only a few days into a meandering trip across America, and already I was easing into something of a nighttime routine. Earlier in the day I’d pinpointed a promising campsite in Ozark National Forest. Now, I found myself ascending an isolated forestry road to get
Economy