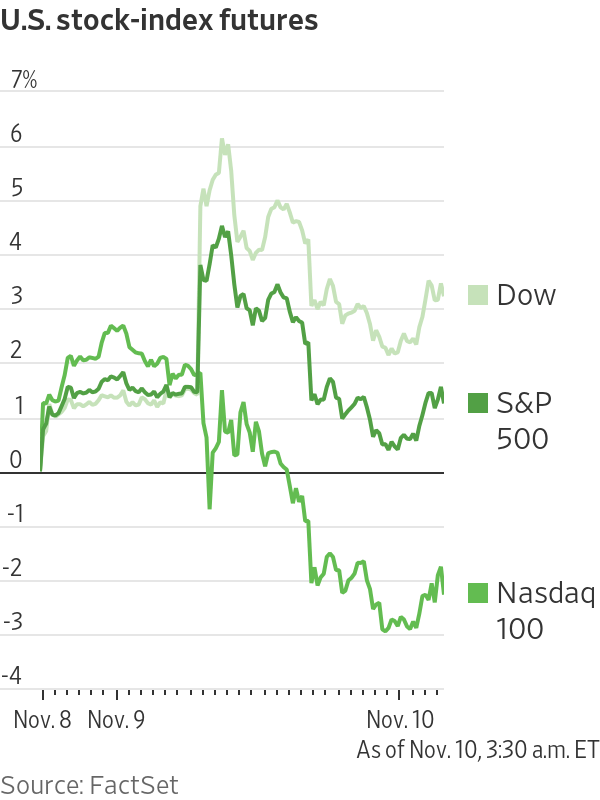 S&P 500 futures wobbled Tuesday, with elevated Covid-19 infection levels, muted stimulus expectations and caution about the timing of vaccines tempering the exuberance that left the benchmark hovering near a record high one day earlier.

Futures tied to the S&P 500 edged down 0.1%, after the index closed Monday at its second-highest level in history. Contracts tied to the Dow Jones Industrial Average rose 0.8%. The blue-chips index a day earlier surged to its highest close since February, driven by progress toward a Covid-19 vaccine from Pfizer and partner BioNTech.

The stock market rally was likely overdone, investors said. The pandemic is far from over, and questions remain about how quickly any vaccines may become available. The U.S. reported more than 100,000 coronavirus cases for the seventh straight day and hospitals face an uptick in patients. That is triggering speculation that local authorities from New York to California may reinstitute some lockdown measures to curb the outbreak.

“The pandemic still has a ways to go, unfortunately,” said Nick Brooks, head of economic and investment research at Intermediate Capital Group. “The Pfizer development is a great development, but I don’t think it’s the game-changer that markets seem to perceive.”

There are still many questions about how quickly vaccines can be rolled out once they are approved by regulators, and how long the immunity would last, he added.

Futures tied to the Nasdaq-100 declined 1.4%, suggesting investors may continue to shun tech stocks after the market open. Expectations that a Covid-19 vaccine could accelerate the global economic recovery led to a reordering of winners and losers Monday. Stocks in travel companies, retailers and banks were among the main beneficiaries. Tech companies, which have fueled most of this year’s market rally, are looking like laggards this week.

“It’s far too early for investors to be making a structural shift from growth to value,” Mr. Brooks said. “There’s been pretty substantial damage to economies and that’s going to take some time to repair.”

He cautioned that markets are likely to remain volatile.

Investors also continue to assess prospects for additional coronavirus-relief spending from the government to help bolster the economic recovery.

The positive news about coronavirus vaccines, combined with improvements in the U.S. economic situation, might reduce support among lawmakers for a large fiscal package, said Esty Dwek, head of global market strategy at Natixis Investment Managers.

“These more promising vaccine developments are an argument for Republicans to delay or to have a smaller-scale stimulus,” Ms. Dwek said.

Health experts say having a vaccine is just one front in a two-front battle against COVID-19. The other is effective treatments for those who are already sick with the disease. WSJ breaks down the three most promising types in development. Photo Illustration: Jacob Reynolds/WSJ.

“We will definitely get something, even if it’s smaller deals like airlines and more targeted measures,” she added.

Republican Senate Majority Leader Mitch McConnell has sounded a little less confrontational than some people had expected on stimulus in the days following the Nov. 3 election, said James Athey, an investment manager at Aberdeen Standard Investments.

“If it sounds like a fiscal package before Christmas—and one of more than $500 billion—is doable, is something they are aiming for, I think that would be a boost for risk sentiment,” Mr. Athey said.

The market has in recent months largely tended to focus on positive developments, he said. “It wouldn’t surprise me if, after some consolidation, we are able to push toward new highs in the equity market, but I think there’s a bit more wood to chop in the short term,” he said.

Before the New York open, many of the stocks that rose or fell sharply Monday extended those moves. Pfizer shares rose 3.5% premarket after leaping more than 7% Monday. Delta Air Lines, Southwest Airlines and
Royal Caribbean Group
all rose 2% or more.

Shares in drugmaker Eli Lilly rose 3.9% premarket after U.S. health officials authorized the use of an antibody drug in early-stage Covid-19 patients.

In bond markets, yields on the 10-year Treasury note ticked down to 0.940%, from 0.957% on Monday. Government bonds sold off sharply in the first trading session of the week, pushing yields to their highest levels since mid-March.

Brent crude, the international benchmark for oil, rose 1.1%, extending its gains this week to around 9%. Gold prices climbed 1.3%, a day after suffering their worst decline since June 2013.

“Investors have been waiting for the moment to tap into cheaper markets but they just didn’t have confidence. The breakthrough in vaccine development could trigger the rotation out of the outperformers to the underperformers,” said Tai Hui, chief Asia market strategist for J.P. Morgan Asset Management in Hong Kong.

“We are seeing some laggards bouncing back because the vaccine development could bring us back to, hopefully, some normality,” Mr. Hui said, highlighting indexes in Singapore and the Philippines, which gained 3.4% and 5.2%, respectively.

—Xie Yu contributed to this article.

Investors Diurnal Team - October 15, 2020 0
Bastion Balance Korea: Tackle Investment Risks Ands Scams At some stage in their lives, everybody has encountered a buyer's remorse (After making a purchase, one...
Economy