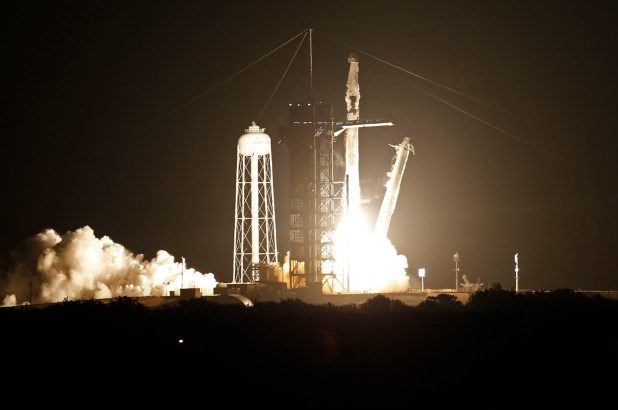 NASA and Elon Musk’s rocket company SpaceX made history Friday, propelling a team of astronauts into orbit on a recycled rocket and capsule previously used on a space mission.

The spacecraft took off from NASA’s Kennedy Space Center in Florida early Friday morning and is headed to the International Space Station — where they will begin a six-month stay.

SpaceX’s Crew Dragon spacecraft launched into the dark, pre-dawn sky atop a SpaceX Falcon 9 rocket propelled by its nine engines. The 5:49 a.m. blastoff was aired live on NASA TV.

The 23-hour flight will transport the crew — which consists of American NASA astronauts, Shane Kimbrough and Megan McArthur, as well as Japanese astronaut Akihko Hoshide and French engineer Thomas Pesquet — to the space station, which orbits 250 miles above Earth, by early Saturday.

The launch marked the third-ever crew flight for Musk’s company and the first to upcycle a previously flown rocket booster and spacecraft with astronauts on board.

The Crew Dragon capsule, named “Endeavor,” previously carried NASA’s Robert Behnken and Douglas Hurley to the International Space Station in May 2020. Endeavour was also used in another mission when it soared atop a SpaceX Falcon 9 rocket in November 2020.

Musk, who is also the boss behind electric car-maker Tesla, has long prioritized renewability. At SpaceX, reusability is a cornerstone of the company’s business plan, hoping that recovering and refurbishing hardware and other materials will decrease the cost of spaceflight.

While SpaceX has re-flown boosters and spacecraft many times on satellite and cargo launches over the years they were unmanned, Friday’s flight marks the first time the company has used recycled a spacecraft for a crewed mission.

‘One rule for them’: Alok Sharma criticised over flights to 30 countries | Alok...

A moment that changed me: I realised I had become a masochist – and...

Looking for a job? Don’t fall prey to this convincing scam

Investors Diurnal Team - June 27, 2021 0
If you’re job hunting on popular sites like ZipRecruiter, Indeed and more, watch out. You’re not the only hunter in the underbrush. In fact,...
Business

Investors Diurnal Team - July 19, 2021 0
After 16 long months, the British government lifted nearly all of its pandemic restrictions across England on Monday including its guidance to work...