U.S. stock futures rose Thursday as investors looked past the political unrest to focus instead on prospects for higher government spending.

Futures tied to the Dow Jones Industrial Average edged up 0.2%, suggesting the index of blue-chip stocks may open the session with muted gains after closing at a record high Wednesday. Contracts tied to the benchmark S&P 500 index ticked 0.3% higher.

Futures on the Nasdaq-100 Index gained 0.5%, suggesting that giant technology stocks may recoup some of their losses. The sector took a beating Wednesday when investors pushed into other stocks that are more dependent on economic growth.

Investor sentiment was boosted by Democrat Jon Ossoff’s victory in the second of two Senate runoff races, which was called shortly after U.S. markets closed Wednesday. The two Georgia seats handed Democrats control of the Senate, raising the prospect of additional stimulus for the U.S. economy after President-elect
Joe Biden

Pro-Trump rioters stormed the Capitol Wednesday, forcing lawmakers to evacuate during a joint session of Congress to ratify the electoral votes of the presidential election.

“The expectation is now we’ve avoided a gridlock, and more fiscal support will be available to the economy through this coming year, rather than less,” said

Investors were largely unmoved Wednesday by violent scenes in Washington, where a mob of Mr.

Trump’s
supporters stormed the Capitol in an attempt to derail the ratification of Mr. Biden’s victory.

“It’s not going to affect the transition of power, and as long as that is the case, I think investors will ignore it,” said Edward Smith, head of asset allocation research at U.K. investment firm Rathbone Brothers.

Investors are finding relief in the fact that the Democrats’ majority in both houses of Congress will be thin, according to Mr. Smith. This will empower moderates in the party and make sweeping tax rises and other policies that would erode corporate profitability less likely, he said. 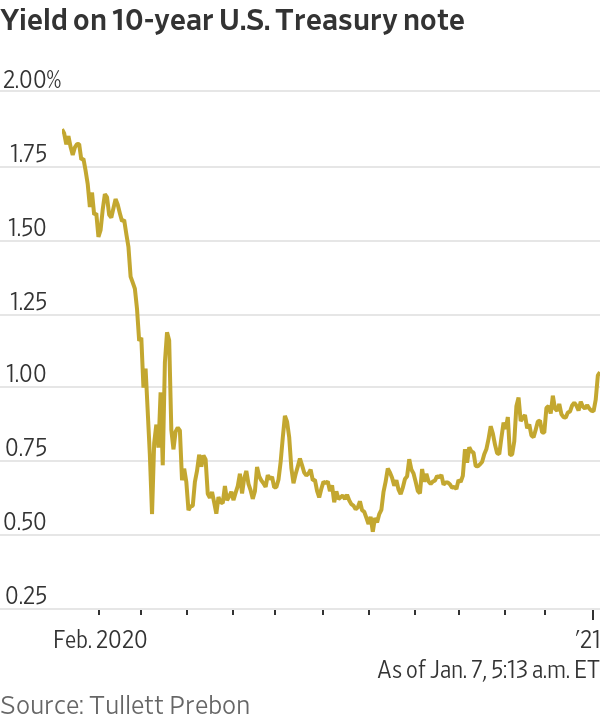 A selloff in U.S. Treasurys extended, with the yield on the 10-year note ticking up to 1.044%, from 1.041% Wednesday. Bond yields rise as prices fall. The 10-year yield climbed past 1% for the first time since March on Wednesday, on bets for increased U.S. stimulus.

The WSJ Dollar Index, which tracks the greenback against a basket of currencies, climbed 0.5%, recovering some lost ground after falling to its lowest level since April 2018.

“At the end of the day, the confidence in the institutions is still there,” said George Efstathopoulos, multiasset fund manager at Fidelity International.

Investors will later gain fresh insight into the U.S. economy’s fitful recovery with a flurry of data releases expected Thursday. Weekly labor-market data, due at 8:30 a.m. ET, are expected to show jobless claims rose to 800,000 in the week ended Jan. 2 as virus cases continued to surge. The Institute for Supply Management’s gauge of services-sector activity, due at 10 a.m., will likely show it fell slightly, but remained in growth territory in December.

In China, the Shanghai Composite Index added 0.7% to close at its highest in more than five years. South Korea’s Kospi rose 2.1% to a fresh record high.

Hong Kong’s Hang Seng slipped 0.5%, however. Shares of China’s big three telecommunications operators, listed in Hong Kong, tumbled after the New York Stock Exchange reversed course for the second time in days and said it would proceed with a planned delisting.
China Mobile,
China Unicom
and
China Telecom
dropped between 7% and 11%.

Also weighing on the Hong Kong market, shares in
Alibaba Group
lost 3.9% and Tencent fell 4.7%. The losses came after The Wall Street Journal reported that U.S. officials are considering prohibiting Americans from investing in the two technology giants.

“Overall, the markets are looking at the positives,” said

Ken Wong,
a portfolio manager at Eastspring Investments. He said investors were looking beyond the unrest in Washington, as well as other issues such as the potential tax implications of Democratic control of Congress.

Write to Joe Wallace at Joe.Wallace@wsj.com and Xie Yu at Yu.Xie@wsj.com

China embassy refutes report it's seeking meeting with the US

The 'Small-Cap Effect Isn't Dead, After All

China Heads Into 2021 With Wind at Its Back

After Covid, Plane Makers Are Even More Dependent on China