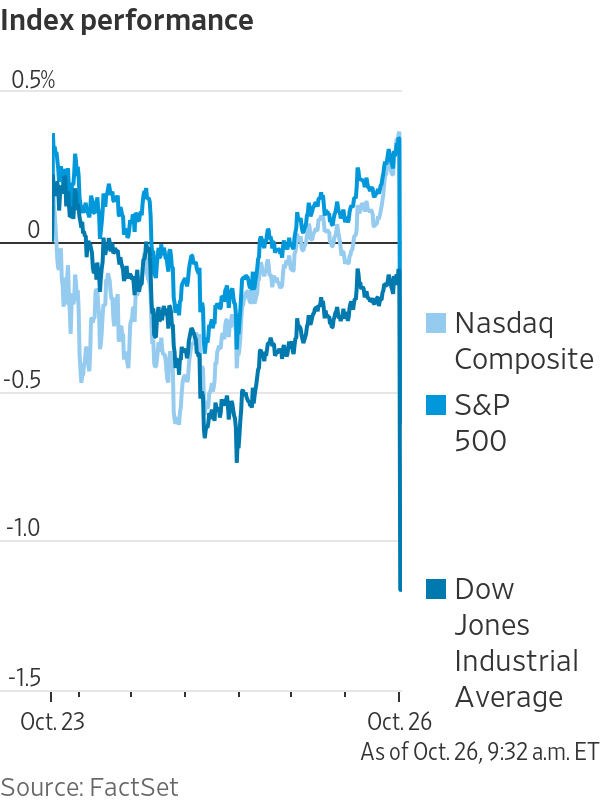 U.S. stocks and oil prices fell Monday as coronavirus cases surged in the U.S. and Europe, adding to worries about the economic outlook after Congress and the White House failed to agree on a much-anticipated fiscal stimulus deal.

The U.S. reported 60,789 new cases Sunday, down from recent record-setting levels, but up from a week earlier. Scientists had been expecting cooler weather to lead to a second wave of the disease, but it is coming earlier than many had anticipated. That is prompting fresh concerns about tighter lockdown restrictions and the effect on the economy.

“It’s a worrying picture for sure. You may have to account for the possibility that by midwinter, there might be circuit breakers implemented,” including stringent short-term shutdowns, said David Stubbs, head of investment strategy at J.P. Morgan Private Bank. “But we always knew this recovery would be stop-start: We won’t be truly moving into the main part of a new cycle until the health care issue itself is dealt with.”

Investors are watching this week’s talks in Congress for any indication on advances in the negotiations for a fiscal stimulus deal. House Speaker Nancy Pelosi told CNN on Sunday that she was expecting more answers on Monday and that an agreement could be reached this week among lawmakers. But Democrats and White House officials are blaming each other for the lack of progress after the two sides went into the weekend without a deal, dimming hopes for an agreement before Nov. 3.

“We have doubt that any strong agreement will be found before the election, we just have days to go,” said Luc Filip, head of private banking investments at SYZ Private Banking. “It’s kind of a game where you show that you want to find an agreement, but I’m not sure of the real willingness behind it.”

He has sold off longer-dated U.S. Treasurys, U.S. stocks and the dollar ahead of the election, and instead bought Chinese equities and exchange-traded funds.

“The Chinese economic momentum is really showing a lot of strength and it’s the only place in this world where you have this dynamism,” Mr. Filip said.

Oil prices slipped. U.S. crude oil futures fell 2.4% to $38.89 a barrel. A cease-fire in Libya has led analysts to project the country’s output will reach 1 million barrels a day in the next four weeks, up from about half a million a day, according to Bjarne Schieldrop, chief commodities analyst at SEB. The rise in coronavirus infections is also muting prospects for the economic recovery and damping demand, he said.

“We have oil being hit from both sides of the equation. Libya supply is seeing a rapid increase,” Mr. Schieldrop said. “At the same time, demand is being hit by a wave of new Covid-19 cases and with new lockdowns.”

The pan-continental Stoxx Europe 600 retreated 1%, led by a decline in German stocks. 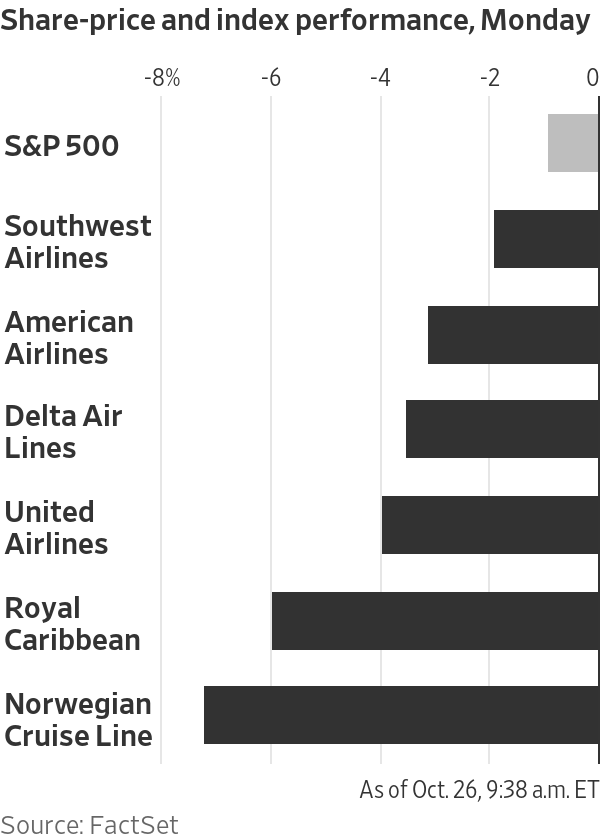 Coronavirus cases are accelerating in Europe. France reported more than 52,000 new infections Sunday, a daily high. Italy is trying to rein in the spread with new rules, such as the mandatory closure of restaurants and bars at 6 p.m. Spain declared a state of emergency, as it did in March.

Among European equities, business-software maker SAP plunged nearly 20% after cutting its outlook for the year and reporting a decline in quarterly sales and profit. The company said businesses are being more cautious about spending and investment.

As federal unemployment aid runs out around the country while Congress negotiates a new stimulus bill, some economists worry that the most vulnerable workers are getting pushed deeper into poverty. Will low-wage workers like Victoria Rodriguez in McAllen, Texas, be left behind? Photo: Bryan Woolston/Reuters[object Object]

The WSJ Dollar Index, which measures the greenback against a basket of currencies, added 0.3%.

Ant Group’s dual IPO to raise £26.44 billion and mark the biggest listing of all time

Alibaba Group To Own Stake Of 6.1% In Dufry – Quick Facts

Goldman Sachs’ net income jumps close to 100% in the fiscal...

Investors Diurnal Team - October 14, 2020 0
Goldman Sachs’ net income jumps close to 100% in the fiscal third quarter. The investment bank posts £8.31 billion of revenue and £7.46 of EPS in Q3. Goldman Sachs' revenue from global markets saw a 29% annualised increase. Goldman Sachs (NYSE: GS) published its earnings report for the fiscal third quarter on Wednesday that blew past Wall Street estimates for profit and revenue. The company attributed its hawkish performance to the annualised return on equity (ROE) that jumped to an all-time quarterly high of 17.5%. Learn more about return on equity. Goldman Sachs jumped 3% in premarket trading on Wednesday. Shares of the company are now trading at £163 per share. The stock had started the year at a higher £180.50 per share but had tanked to a year to date low of £104 per share in March. Are you looking for fast-news, hot-tips and market analysis? Sign-up for the Invezz newsletter, today. In related news from the United States, U.S. Bancorp said its profit fell in the fiscal third quarter on Wednesday. Goldman Sachs’ Q3 financial results versus analysts’ estimates Goldman Sachs said that its net income posted a close to 100% increase in the third quarter to £2.68 billion that translates to £7.46 per share. In the same quarter last year, its net income was capped at £1.38 billion or £3.69 per share. According to FactSet, experts had forecast a much lower £4.27 of per-share earnings for Goldman Sachs in the recent quarter. In terms of revenue, the investment bank reported £8.31 billion in Q3 that marks a 29.5% increase versus the comparable quarter of last year. Its revenue was also higher than the analysts’ estimates of £7.23 billion, as per FactSet. Goldman’s peer, Bank of America Corp, also published its quarterly financial report on Wednesday. Goldman Sachs generated £1.52 billion of revenue from investment banking in the third quarter that represents a 7% annualised growth and topped FactSet Consensus of £1.43 billion. Revenue from global markets saw a 29% year over year increase to £3.51 billion in Q3. Revenue from FICC came in 49% higher than last year Within global markets, the American multinational added, revenue from equities printed at £1.58 billion versus £1.56 billion expected. FICC (fixed income, currency, and commodities), on the other hand, posted a 49% increase in revenue to £1.93 billion in the recent quarter versus the FactSet Consensus of £1.56 billion. According to Goldman Sachs: “The operating environment continued to recover during the third quarter of 2020 from the impact of the COVID-19 pandemic earlier in the year as global economic activity significantly rebounded following a sharp decrease in the second quarter, market volatility declined modestly, and monetary and fiscal policy remained accommodative.” At the time of writing, Goldman Sachs is valued at £55.90 billion and has a price to earnings ratio of 16.04.
Dividend

Investors Diurnal Team - October 23, 2020 0
Nordea Bank’s net profit jumps to £761.14 million in the fiscal third quarter. The Helsinki-based bank reports £1.05 billion of net interest income in Q3. The financial services group is committed to paying a dividend for 2019. In its report on Friday, Nordea Bank Abp (STO: NDA-SE) said that its net profit in the fiscal third quarter came in higher than expected. The company attributed the increase to lower costs, higher lending, and loan-loss reversals in the recent quarter. Nordea closed flat in the stock market on Friday. On a year to date basis, shares of the company are roughly 8% down, but have recovered close to 40% since March. Confused about choosing a reliable stockbroker to trade online? Here’s a list of the top few to make selection easier for you. Are you looking for fast-news, hot-tips and market analysis? Sign-up for the Invezz newsletter, today. Nordea reports £1.05 billion of net interest income in Q3 At £761.14 million, the Helsinki-based bank said that its third-quarter net profit was significantly higher than £301.91 million of loss in the comparable quarter of last year. According to FactSet, experts had forecast a lower £633.83 million of net profit for