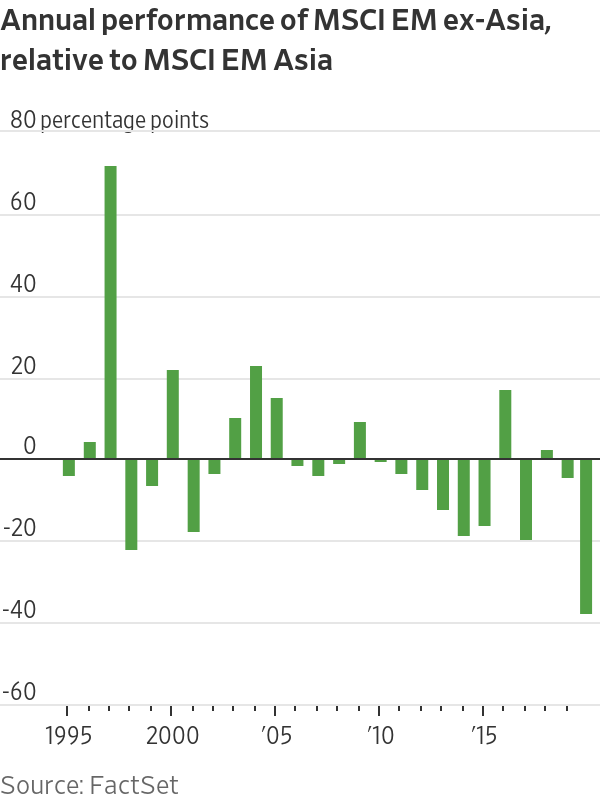 Asia’s emerging-market stocks are on track to outperform peers elsewhere in the world by the greatest margin in a quarter of a century this year, as stocks in East Asia’s manufacturing hubs steam ahead. But that yawning crevasse could narrow in the months ahead.

Stocks included in the MSCI EM Asia index are up 17.5% in dollar terms this year, while the MSCI EM ex-Asia index is down 19.9%. That leaves the largest gap between the two since the Asian financial crisis in the late 1990s.

The two blocs can be broadly divided along economic as well as geographic lines. Those with large, manufacturing-based current-account surpluses have performed very well this year. As it happens, the largest examples—China, South Korea and Taiwan—are in East Asia. The three make up around 70% of the benchmark MSCI EM. 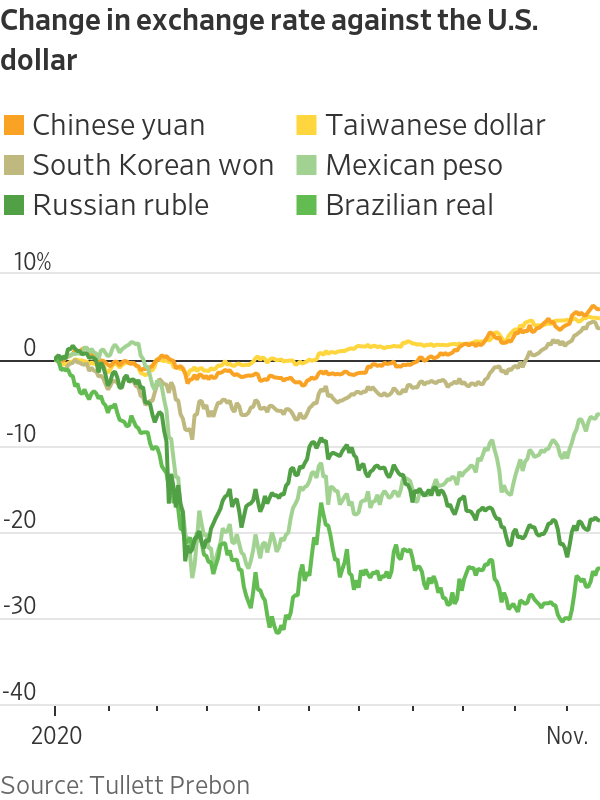 Those with persistent current-account deficits, such as Brazil, Mexico and South Africa, have done much more poorly. India, though of course in Asia, would also fit better into that camp economically. Countries such as Saudi Arabia and Russia, where commodity-driven current account surpluses have collapsed, have struggled too.

In short, the countries that have been hit hardest this year have the largest potential recovery to make too—if the narrative shifts decisively toward global recovery. They also have more to gain from the rollout of vaccines than East Asian countries, where the spread of infection has been better-controlled.

The MSCI EM ex-Asia index also leans heavily toward energy, basic materials and financial stocks, which are precisely the stocks that would benefit most from expectations that the worst of the pandemic’s economic effects have now passed. Likewise, despite the dollar’s general decline this year, the Mexican peso, South African rand, Russian ruble and Brazilian real are still down against the greenback. A reversal in the exchange-rate trend, based on the same recovery expectations, would magnify equity returns for overseas investors.

There are some signs that may already be happening: The Mexican peso and Brazilian real are outperforming the Chinese yuan and the Korean won in the fourth quarter so far.

A bet on emerging markets outside of Asia requires important caveats too. In many parts of the developing world the deployment of a vaccine will be slow. Most countries can’t offer the near-unlimited fiscal support that major developed economies can.

There is also no reason that different emerging markets—which are only lumped together as a single investment class because of the questionable decisions of index providers—must necessarily revert to some mean over time. Asian markets have outperformed their non-Asian peers most years during the past decade.

But with good news on vaccines and the prospect of a stronger economic recovery on the horizon after a bleak winter in the Northern Hemisphere, the stars are aligning for a period of stronger performance from the battered equities of emerging markets outside East Asia.

Should You Start Rotating Your Portfolio? Not Because of the Election