Die-hard
Tesla Inc.
investors are feeling vindicated: The stock is extending its relentless run, and the company is set to join the S&P 500, the most widely tracked stock benchmark in the world. Many are even buying more shares.

Tesla has surged 731% this year and reached a record high Friday, padding the wallets of investors who have poured their savings into both the stock and the company’s electric cars. The rally has accelerated since S&P Dow Jones Indices said it would add Tesla to the benchmark. The shares are up 70% since Nov. 16 and will enter the S&P 500 on Monday.

Tesla’s run has been so powerful that many bearish investors have abandoned their money-losing bets, sending short positions on the stock to a record low. Short interest in the stock as a percentage of shares available for trading recently fell to a low of 5%, down from roughly 18% earlier in the year, IHS Markit data shows.

Will Tesla be able to maintain its growth after joining the S&P 500? Why or why not? Join the conversation below.

Since Tesla went public a decade ago, its market value has surged to $659 billion to become the sixth-largest company in the U.S. market. Tesla is by far the biggest company ever added to the S&P 500; its market value ballooned even before it delivered four consecutive quarters of profits to make it eligible for inclusion.

Tesla bulls say the company’s potential is limitless and are buying even more stock as shares charge to new highs.

“There’s so much good news to come,” said Rostislav Zotin, a 44-year-old business engineer who says he has been regularly buying Tesla shares since 2013, stashing away extra income in the investment. He pointed to Chief Executive
Elon Musk’s

ability to innovate and his promise of an on-demand robot taxi fleet. “I’d recommend to buy Tesla at any price,” he added.

After buying a black Tesla Model 3 in September—which he had long coveted—Mr. Zotin said he bought five shares in early December for about $568 apiece and kept buying later in the month. The stock closed Friday at $695. At times, he said, his wife has questioned whether they should be putting the cash toward a home instead. They rent an apartment in Schwerzenbach, Switzerland, a tiny town near Zurich.

He is happy he has held on. Mr. Zotin and other investors acknowledge that Tesla shares have been a volatile ride, but right now they are reaping the benefits.

“It’s going to let me retire a few years earlier,” said Dave Martin, a 67-year-old engineer who lives in Mendocino County, Calif., and spends a couple of hours a day reading about Tesla. An investor since 2014, he picked up even more shares this month and said he rarely cashes out. An exception was when he recently bought a white Tesla Model Y sport-utility vehicle.

Bullish investors said they expect Tesla will bring electric vehicles to the masses, and many compare the company to
Apple Inc.,
which reshaped the personal-computer, cellphone and music industries while outperforming the broader stock market.

“I feel like S&P needs Tesla more than Tesla needs S&P,” said Vincent Yu of Irvine, Calif., who owns an auto-parts company and runs a blog on Tesla. Mr. Yu, 41 years old, said he invested in the stock in 2013 and has added to his holdings since, while closing positions in such tech behemoths as
Amazon.com Inc.
and Apple.

He pointed to the Nasdaq Composite—which includes Tesla and is up 42% this year—compared with the S&P 500’s 15% gain.

His devotion is so strong that in addition to two Tesla cars, he has also bought eight bottles of Tesla Tequila that were marketed on the car maker’s website this year for $250 apiece before selling out. Fans say the souvenirs are a nod to Mr. Musk’s tweet on April Fools’ Day in 2018, when he joked that the auto maker was bankrupt and he “was found passed out against a Tesla Model 3, surrounded by ‘Teslaquilla’ bottles.”

Mr. Musk often engages on
Twitter
with skeptics. Ahead of that 2018 tweet, investors were concerned about the company’s cash levels, and its credit rating had been downgraded. Since then, the stock has surged 1,276%. Tesla ended the third quarter with about $14.5 billion in cash, and S&P Global Inc. upgraded the company’s credit rating Thursday.

James Anderson,
a partner at the investment firm Baillie Gifford, Tesla’s third-biggest institutional shareholder, said near-daily criticism and doubt thrown at Tesla by short sellers and other detractors used to be frustrating.

Baillie Gifford ignored naysayers and stuck with its belief that Tesla would eventually grow to be more than a car company, pointing to its efforts to expand the usage of high-powered batteries, solar and autonomous driving. The Edinburgh-based firm’s initial $89 million investment in 2013 has ballooned to $21.6 billion, not including any proceeds from recent share sales. 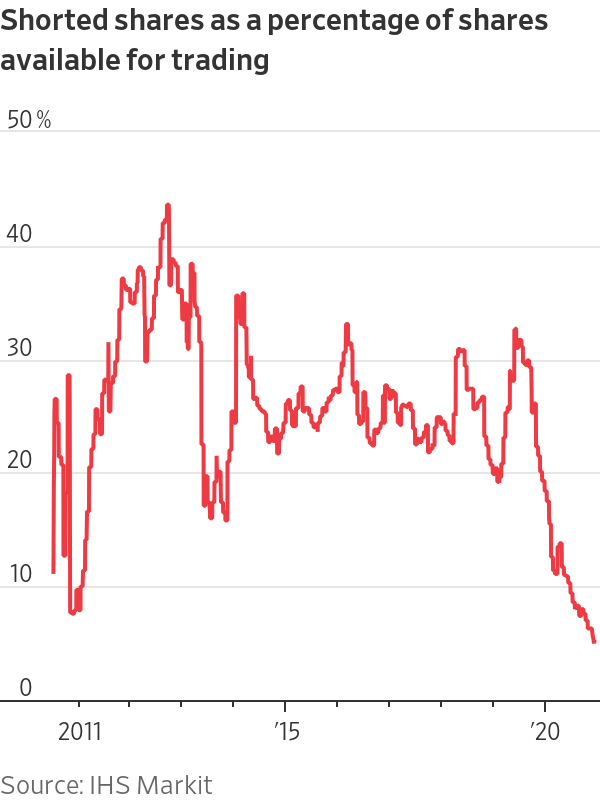 The trajectory so far lines up with a bold vision Mr. Musk initially laid out to Baillie Gifford’s executives when they first met. “He said a phrase, ‘There’s a small but growing possibility that Tesla could be the largest company in the world,’” Mr. Anderson recalled.

Mr. Musk and his investors’ riches have translated to big losses for others. As Tesla’s market value has ascended, controversy surrounding the stock has only intensified.

Tesla’s polarizing nature has transformed the company into one of the biggest casinos on Wall Street. The options market tied to Tesla has swelled, with more than half a trillion dollars in contracts recently outstanding, making Tesla the most popular wager on a company ever, according to Henry Schwartz, senior director at Cboe Global Markets.

Although short interest on the stock has dwindled this year, Tesla remains a popular bearish bet. Short bets total $32 billion, cementing Tesla’s status as the most-shorted stock in history, according to S3 Partners LLC. The shorts have racked up $39 billion in losses this year, forcing some to surrender.

“It is nutty horrible being short something that quadruples,” said

John Hempton,
the founder of Bronte Capital, a hedge fund in Australia that oversees about $1 billion in assets. He closed his position earlier in the year ahead of an August stock split. “The valuation is absurd. But the holders are also insane.”

He said he might consider establishing another bearish position after the stock joins the S&P 500.

Some traders forecast a big fall in the stock once it is added to the index and the initial wave of demand from passive investors dissipates.

Tesla’s shares surged 99% in the third quarter, while Mr. Einhorn’s firm returned 5.9%, according to a quarterly letter viewed by The Wall Street Journal. Earlier this year in a separate update, Greenlight Capital questioned Tesla’s accounting methods and pointed to product defects.

“We expect the TSLA parabola to end around the speculated inclusion in the prestigious S&P 500 index,” Greenlight wrote.

Tesla’s stock has surged since the start of the year, giving it a market capitalization larger than many behemoths of American industry. But its rise wasn’t necessarily driven by fundamentals. WSJ explains. Illustration: Jacob Reynolds/Wall Street Journal[object Object]

Eli Lilly, Twitter, NIO: What to Watch When the Stock Market Opens Today

The CEO of testing giant LabCorp is advising CEOs on their...

Albertsons Cart is Full as Covid Windfall Gets Extended

BlackRock’s net income jumps to £1.13 billion in the fiscal fourth...

Investors Diurnal Team - January 14, 2021 0
BlackRock’s net income jumps to £1.13 billion in the fiscal fourth quarter. The asset manager tops analysts' estimates for earnings and revenue. BlackRock values assets under management at £6.37 trillion as of the end of Q4. BlackRock Inc. (NYSE: BLK) published its earnings report for the fiscal fourth quarter on Thursday that topped analysts’ estimates for earnings and revenue. The American multinational valued assets under management at £6.37 trillion as of the end of Q4. Earlier this week, BlackRock said that it had been selling stakes in three of the Chinese telecommunication providers after the United States decided in favour of including them in its sanctions list. Are you looking for fast-news, hot-tips and market analysis? Sign-up for the Invezz newsletter, today. BlackRock was reported about 4% down in premarket trading on Thursday. The stock is currently trading at £554.50 per share. In comparison, it had plummeted to as low as £240 per share in March 2020. If you want to invest in the stock market online, you’ll need a reliable stockbroker – here’s a list of the top few to make selection easier for you.   BlackRock’s Q4 financial results versus analysts’ estimates BlackRock said that its
Economy