Tesla surged past $525 billion in market capitalization on Tuesday, leaving it less than 5% behind Warren Buffett’s Berkshire Hathaway, which hit a record $549 billion market cap at the close of trading.

Elon Musk’s electric-vehicle company climbed as high as $530 billion in market value on Tuesday, signaling it could overtake the famed investor’s conglomerate within days.

Read More: A portfolio manager at $38 billion Baron Funds shares his checklist for investing in the most promising SPACs — and names 3 of the booming ‘blank-check companies’ he finds attractive now

The shrinking gap between the companies’ market caps primarily reflects Tesla’s stock price skyrocketing more than 500% since the start of this year. Its shares traded at less than a tenth of their current price as recently as October 2019.

In contrast, Berkshire’s shares have only climbed about 2.4% this year, trailing a 4% gain for the benchmark Dow Jones index over the same period.

The proximity of Tesla and Berkshire’s market caps is striking given the dramatic differences in their scale and financial strength.

Read More: The investment chief at a $20 billion family office explains how he allocates assets for the ultra-wealthy — and shares 3 outperforming mutual fund managers on his buy list

It also boasts a roughly $230 billion equity portfolio that includes more than $100 billion worth of Apple stock and billion-dollar stakes in American Express, Bank of America, Coca-Cola, and other blue-chip companies.

Buffett’s company earned $255 billion in revenue and booked $73 billion in investment gains last year, fueling $81 billion in net income. Moreover, it held $137 billion in cash and short-term investments at the end of March — enough to buy Tesla in its entirety at the time, as its market value had tumbled below $100 billion during the coronavirus crash.

Read More: Morningstar’s top stock pickers say these are the 10 highest-conviction stocks they recommend — which top fund managers recently piled their money into

Tesla investors are valuing the automaker at 21 times last year’s sales, because they’re betting on phenomenal growth, wagering it can dominate multiple markets with its technology, and expect it to become a global powerhouse.

Yet it’s still surprising that Tesla, at its current stage of growth, is already threatening to become more valuable than one of the world’s largest and most successful companies.

Here’s a chart showing how quickly Tesla has caught up to Berkshire in terms of market value: 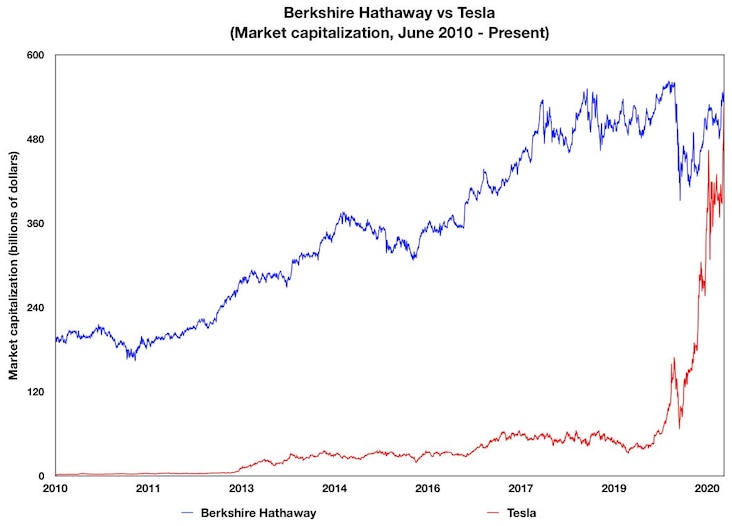 Coronavirus: $227 billion for 29,000 lives? Study calculates cost of US shutdowns

Central Vietnam prepares for evacuations ahead of typhoon

Universal and Cinemark agree on earlier home release for movies

Investors Diurnal Team - August 14, 2020 0
Connection (PC Connection, Inc.; NASDAQ: CNXN), an industry-leading technology solutions provider of a full range of information technology (IT) solutions to business, government, and education markets, has been named a 2019 HP Inc. Partner of the Year. HP’s annual Partner of the Year Awards recognized top-performing partners for exemplary achievements in growth and innovation. Connection was honored with an HP U.S. Personal Systems National Solution Provider of the Year Award. "Channel partners are the lifeblood of our business, and it's a pleasure to recognize the achievements of this year's partner award winners, each of whom have demonstrated exceptional growth through innovation and a true commitment to our mutual customers,” said Scott Lannum, Vice President and General Manager, Americas Commercial Channel Sales, HP Inc. "We congratulate Connection on this well-deserved recognition, and thank them for their continued partnership with HP.” This award reflects Connection’s ability to help customers meet the demands of the modern workplace with computing solutions that deliver greater productivity, efficiency, and security. 2020 marks a monumental shift in the way millions of Americans connect, collaborate, and get work done. Connection has been able to help customers transform their workspace and make the transition rapidly and securely with procurement offerings, support services, productivity tools, and HP solutions designed to bring enterprise-level efficiency and security to home and remote work. Tim McGrath, President and Chief Executive Officer of Connection said, "It’s a tremendous honor to be recognized through the HP Partner of the Year Awards Program. I would like to thank the entire HP team for their support. Connection will continue to build on our partnership with HP and explore new ways to deliver the exceptional value, service, and industry-leading innovations our mutual customers deserve.” About Connection PC Connection, Inc. and its subsidiaries, dba Connection, (www.connection.com; NASDAQ: CNXN) is a Fortune 1000 company headquartered in Merrimack, NH. With offices throughout the United States, Connection delivers custom-configured computer systems overnight from its ISO 9001:2015 certified technical configuration lab at its distribution center in Wilmington, OH. In addition, the Company has over 2,500 technical certifications to ensure that it can solve the most complex issues of its customers. Connection also services international customers through its GlobalServe subsidiary, a global IT procurement and service management company. Investors and media can find more information about Connection at https://ir.pcconnection.com. Connection–Business Solutions (800.800.5555) is a rapid-response provider of IT products and services serving primarily the small-and medium-sized business sector. It offers more than 425,000 brand-name products through its staff of technically trained sales account managers, publications, and its website at www.connection.com. Connection–Enterprise Solutions (561.237.3300), www.connection.com/enterprise, provides corporate technology buyers with best-in-class IT solutions, in-depth IT supply-chain expertise, and access to over 425,000 products and 1,600 vendors through TRAXX™, a proprietary cloud-based eProcurement system. The team’s engineers, software licensing specialists, and project managers help reduce the cost and complexity of buying hardware, software, and services throughout the entire IT lifecycle. Connection–Public Sector Solutions (800.800.0019), is a rapid-response provider of IT products and services to federal, state, and local government agencies and educational institutions through specialized account managers, publications, and online at www.connection.com/publicsector. cnxn-g ### View source version on businesswire.com: https://www.businesswire.com/news/home/20200814005450/en/
Markets

Investors Diurnal Team - November 20, 2020 0
(RTTNews) - Swiss Re (SSREY.PK) confirmed its over-the-cycle financial targets. The Group reiterated its capital management priorities, focusing on capitalisation and a stable or increasing dividend. Swiss Re CEO Christian Mumenthaler said: "We are optimistic on the outlook for all of our businesses as we see positive momentum in the underlying earnings power of the Group. We expect that COVID-19 will remain an earnings and not a capital event for the Group, with declining exposures going forward. Our strategy positions Swiss Re for long-term success." Swiss Re expects Property & Casualty Reinsurance or P&C Re to improve its normalised combined ratio to less than or equal to 96% in 2021. Life & Health Reinsurance (L&H Re) maintained its successful track record, despite COVID-19 impact. The company said Corporate Solutions' turnaround is well on track, with the business confident of achieving a normalised combined ratio that is less than or equal to its 98% target in 2021.
Markets

Investors Diurnal Team - August 20, 2020 0
AGCO, a worldwide manufacturer and distributor of agricultural equipment and solutions (NYSE:AGCO), today announced that Martin Richenhagen has chosen to retire as Chairman, President and Chief Executive Officer on December 31, 2020. The Company further announced that its Board of Directors has appointed Eric Hansotia, currently AGCO’s Senior Vice President and Chief Operating Officer, to succeed Mr. Richenhagen as Chairman, President and Chief Executive Officer effective January 1, 2021. In addition, Mr. Hansotia has been elected to the Board of Directors, effective immediately. Martin Richenhagen joined AGCO in 2004 as President and CEO and was named Chairman of the Board of Directors in 2006. "It’s been my greatest privilege to serve alongside my AGCO colleagues for the past 16 years,” stated Mr. Richenhagen. "Their dedication, integrity, innovativeness and commitment to our customers are what make AGCO such an extraordinary Company, and I’m proud to have been part of its history. I have tremendous confidence in Eric, the Board, our employees and our dealer network, and believe that AGCO’s best days are yet to come.” Speaking on behalf of AGCO’s Board of Directors, Gerald Shaheen, AGCO’s independent Lead Director, stated, "Martin has served AGCO with great distinction through the years, and we are enormously thankful for his contributions to the Company. Under his leadership, AGCO evolved into an integrated global manufacturer of high-tech, sustainable, agricultural solutions to serve our farmers around the world. AGCO expanded its product portfolio, entered into new markets, consolidated product platforms and modernized facilities. Driven by strong financial performance under his direction, AGCO improved to an investment grade credit rating while initiating a dividend and a substantial share re-purchase program. Martin has been a model of corporate leadership and integrity in the industry. We wish him well in his retirement and look forward to new levels of success under Eric’s leadership.” "The Board and I are confident that Eric is the right person to build on AGCO’s solid foundation,” added Mr. Richenhagen. "Eric is a seasoned leader with broad industry knowledge, making him uniquely qualified to lead AGCO into the future. Eric has made significant contributions to AGCO’s success over the past seven years, most recently leading the Company through the unique challenges presented by COVID-19. His strong strategic view on the future trends in global agriculture along with his diverse operational experience will enable AGCO to successfully meet the changing needs of our customers.” Mr. Hansotia joined AGCO as Senior Vice President, Global Crop Cycle and Fuse Connected Services in 2013 and has served in the role of Senior Vice President and Chief Operating Officer since 2019. Prior to joining AGCO, Mr. Hansotia had a successful 20-year tenure with Deere & Company where he held leadership positions including Senior Vice President, Global Harvesting and Vice President of Global Crop Care. Mr. Hansotia shared, "I want to express my gratitude to both Martin and the Board of Directors for their confidence in my ability to lead AGCO into the future. Together with our talented team, I look forward to helping our global farmers sustainably feed the world through smart, innovative agricultural solutions. I believe farmer-driven innovation is the key to unlocking value for our employees, dealers and shareholders, and I look forward to building on Martin’s legacy as we realize AGCO’s bright future.” About AGCO AGCO (NYSE:AGCO) is a global leader in the design, manufacture and distribution of agricultural solutions and delivers high-tech solutions for farmers feeding the world through its full line of equipment and related services. AGCO products are sold through five core brands, Challenger®, Fendt®, GSI®, Massey Ferguson® and Valtra®, supported by Fuse® smart farming solutions. Founded in 1990 and headquartered in Duluth, Georgia, USA, AGCO had net sales of $9.0 billion in 2019. For more information, visit https://www.AGCOcorp.com. For company news, information and events, please follow us on Twitter: @AGCOCorp. For financial news on Twitter, please follow the hashtag #AGCOIR. Please visit our website at www.agcocorp.com View source version on businesswire.com: https://www.businesswire.com/news/home/20200820005565/en/