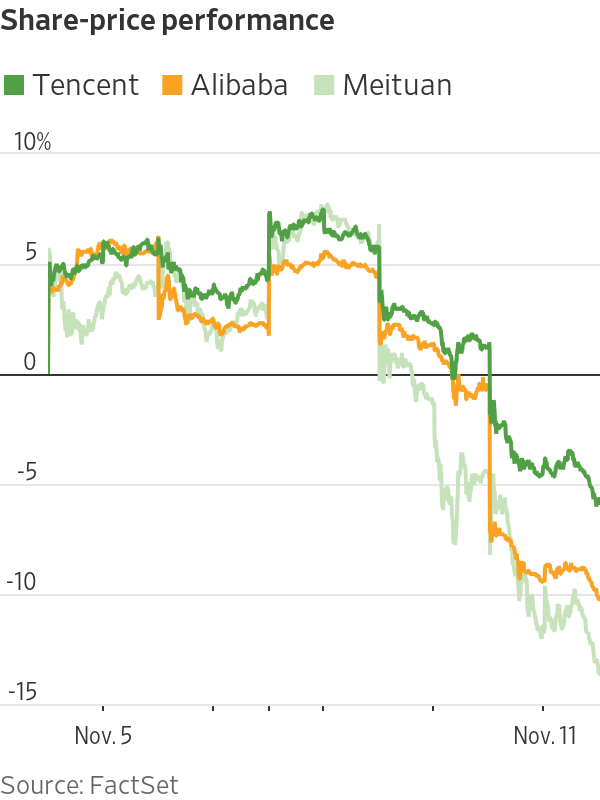 Governments around the world are grappling with the overreaching power of Big Tech. Recent events indicate Beijing will take on its technology giants as well.

China’s antitrust watchdogs on Tuesday announced draft rules targeting monopolistic practices on the country’s digital platforms. There have long been talks about how to apply the country’s antimonopoly laws to the tech sector, but this latest move comes at an interesting time that should worry Chinese internet giants.

The country’s regulators halted the record initial public offering of Ant Group, one of China’s dominant digital payment platforms backed by Alibaba, last week. The announcement on the draft rules also came just a day ahead of Singles Day, an online shopping bonanza where there were numerous complaints about abuses involving dominant e-commerce platforms.

The draft rules cover a range of monopolistic practices including abusing dominant market positions, predatory pricing and restricting merchants from working with rivals’ platforms. Chinese internet giants such as Alibaba and Tencent have penetrated every aspect of life in the country from social media to e-commerce. The two companies, for example, are behind the two dominant mobile-payment platforms. Alibaba is the dominant player in e-commerce, but Tencent has stakes in its rivals
JD.com
and Pinduoduo.

Beijing’s unease about the increasing concentration of economic power in the hands of the internet titans may have played a part in its recent moves. But their dominant positions have also created myriad social and economic problems. The speed and ease of taking out loans on Ant’s platform, for example, could introduce systemic risks into the financial system. The new rules also came at the back of China’s push to encourage faster domestic growth by spurring competition internally, as a hedge against slowing external growth.

This is bad news for Chinese internet giants, which have been market darlings for a long time. The Hang Seng Tech Index, which includes China’s largest internet stocks like Alibaba and Tencent, has dropped more than 10% in two days.

Big Tech is receiving heightened scrutiny around the globe. Things could get more intense in China.

The Intimidation and Unfair Enforcement of Detroit’s Election

U.S. Crop Prices Are Rising, and China Is Buying

Some Brewers Hate Lockdowns More Than Others