In the third quarter of 2020, the dollar’s share of global foreign-exchange reserves slipped to its lowest level in almost a quarter of a century. But don’t let the figures fool you: The greenback is as central to the global financial system as it has ever been.

International Monetary Fund data shows the dollar’s share of reported reserves fell to 60.5% in September. The dip has been magnified in nominal terms due to the currency’s depreciation over the past year. But even accounting for that, the real dollar exposure of major central banks is likely higher than it looks.

At 5.9% of global reserves, the share of the yen is high compared with recent decades. But that increase actually disguises dollar demand. Many large yen holders are trying to acquire more dollars through currency swaps. That popular trade has led to a surge in foreign purchases of short-term Japanese government bonds. 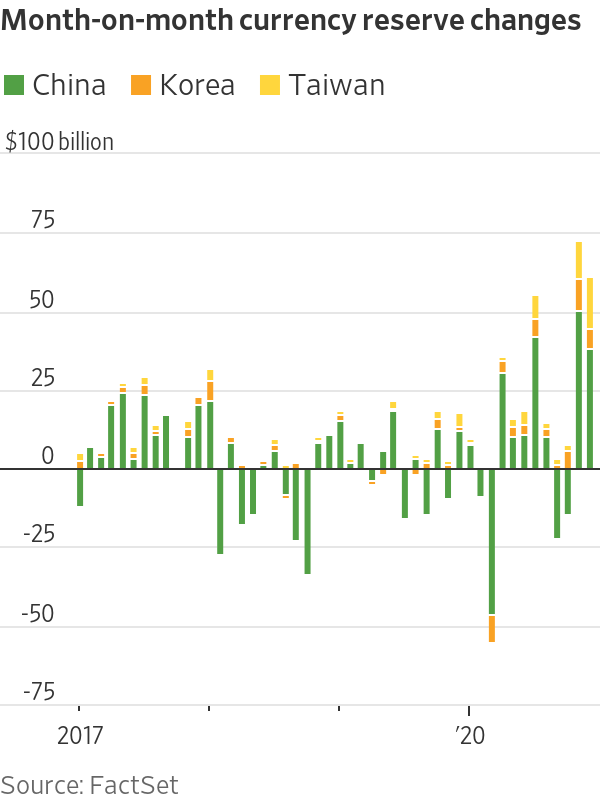 Most central banks don’t break down their holdings in depth, but the unusually transparent Reserve Bank of Australia does. It held around $6.8 billion in U.S. dollar-denominated securities as of June, an amount that almost triples when its derivatives exposure is taken into account. Its roughly $3.7 billion in yen reserves is cut in half after the same calculus.

We don’t know exactly how much of that is dollar-denominated, but the greenback will probably be well represented. The increase in purchases is likely meant to counteract a rally in their currencies, primarily against the dollar. Research by Exante Data shows central banks were already purchasing more dollars than other currencies as the year came to a close.

Narratives suggesting the dollar declined in importance last year after the Federal Reserve’s actions in February and March played the central role in preventing global financial meltdown are suspect. The dollar’s share in reserves is likely to recover to reflect that reality.

The Warped Morality of Liberalism

Wonder Woman to the Rescue?

U.S. Stock Futures Edge Down After Bigger Drops in Asia

Investors Diurnal Team - June 15, 2020 0
Bastion Balance Korea: Tackle Investment Risks Ands Scams At some stage in their lives, everybody has encountered a buyer's remorse (After making a purchase, one...