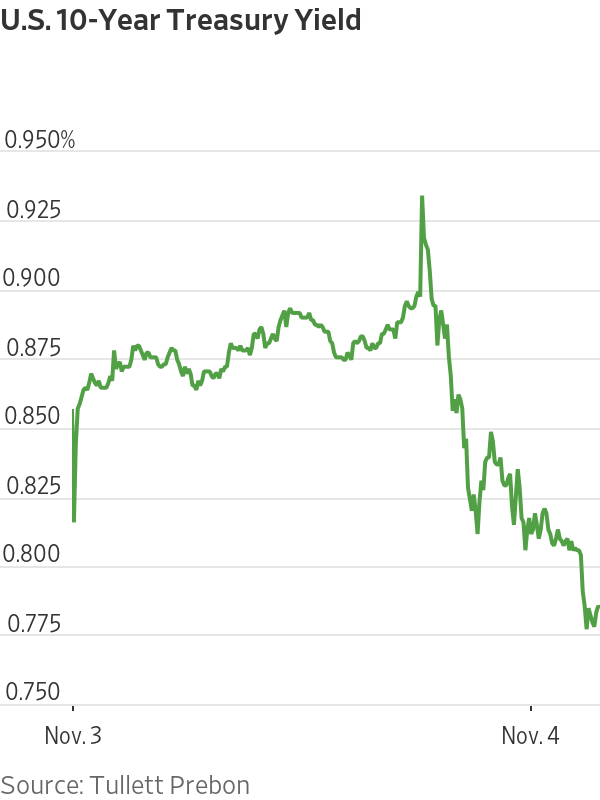 With the election result still up in the air, potentially for days to come, one thing investors had hoped for can now be all but ruled out: a coordinated and consistent economic policy from Washington.

In the grand scheme of things, market moves this time haven’t been colossal, but they have been telling, especially in the bond market.

In 2016, an equity selloff was the widespread consensus reaction to a Trump victory, which was upturned in a matter of a few hours as investors realized the mathematics of the races would allow for ambitious corporate-tax cuts. But if the equity market told the story of the 2016 election, it is the U.S. Treasury market that’s singing now: 10-year yields rose to as high as 0.94% shortly after polls closed on the East Coast. As it became obvious that some form of divided government is far more likely than polls had implied, yields tumbled back to as low as 0.78%.

Just as financial markets are amoral, they are also apolitical. A narrative could easily have been constructed for a positive market reaction if either party won a clean sweep across both houses and the presidency. With the level of rancor between the two parties, any form of split result is difficult to see optimistically. The narrow path to surprise outcomes hasn’t closed yet, and the possibility of unified government shouldn’t be entirely scotched, but results so close and contentious could easily produce long disputes in the courts.

A paralyzed government places more weight on the shoulders of the Federal Reserve, too. Having taken the leading role in economic policy during much of the period after the financial crisis in 2008, political turmoil may leave Fed Chair Jerome Powell with more responsibility.

Major companies and particularly tech giants might have groused about Democratic plans for taxes and regulation, but smaller businesses would have certainly benefited from stronger stimulus-driven growth: As Nasdaq futures jumped when President Trump began to outperform expectations in early counts, the Russell 2000’s futures began to fall.

In any case, the outlook doesn’t look good for something that would break markets out of the relative stability they’ve been in since the late summer, both in equities and bonds.

The bottom line: Delayed or less-aggressive stimulus would be bad news for cyclical stocks, but investors who weren’t already positioned aggressively should steer clear of making any overwhelming judgments or immediate decisions.

Tesla to Enter S&P 500 at Full Weight in December

'Pandemic' chosen as Word of the Year

With Liberty and Justice for All

Investors Diurnal Team - November 30, 2020 0
Bank stocks are “set to fire on all cylinders” but not all banks will benefit equally, according to Morgan Stanley analyst Betsy Graseck. Bullish on the sector Morgan Stanley’s bank analyst is more positive on the sector ahead of multiple vaccines against the coronavirus making its way to the general public, Bloomberg reported. A more positive outlook on the economy will result in a “wave” of reserve releases and capital returns over a two year period. Are you looking for fast-news, hot-tips and market analysis? Sign-up for the Invezz newsletter, today. As such, the analyst revised her rating on the large-cap bank and consumer finance sector from in-line to “attractive,” according to Bloomberg. The more bullish tone is based on expectations for the U.S. to return to some degree of “normalization” at around this time next year. Not so much on all stocks But this isn’t to say that every bank stock in the sector should be bought. Quite the opposite holds true as Morgan Stanley turned bearish on stocks like Bank of America Corp (NYSE: BAC) and JPMorgan Chase & Co. (NYSE: JPM).  In fact, the analyst slapped both Bank of America and JPMorgan with a double downgrade, each
Economy