FIAT CHRYSLER AUTOMOBILES (FCA), an Italian-American carmaker, and PSA Group, the French owner of Citroën and Peugeot, do not like to dwell on their shared past. When PSA acquired Chrysler Europe in 1978 for a nominal $1 it picked up some struggling British and French marques and a heap of debt. That tie-up crashed a few years later with the demise of Talbot, the brand created from these motoring scraps. On January 4th shareholders of both firms voted to give it another go, acceding to a mega-merger agreed in 2019. Hopes seem higher this time. The name of the combined firm, Stellantis, is derived from the Latin for “brightens with stars”.

Stardust is sadly lacking from an industry that, along with many others, has taken a beating in the pandemic. But the creation of the world’s fifth-largest carmaker by vehicles produced (see chart) is well set to deal with the effects of covid-19—and to navigate the other difficulties facing the automotive business. 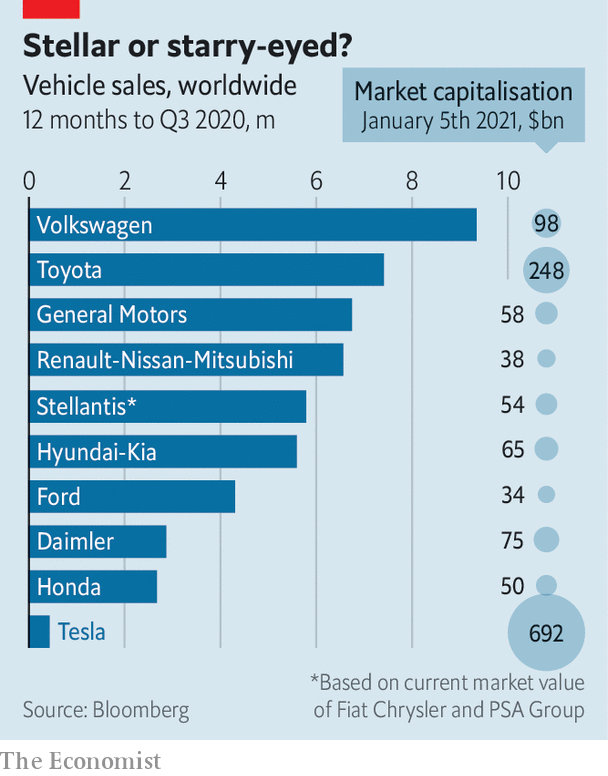 The pandemic has sent screeching into reverse an industry that was already going backwards, as demand slumped in car-mad China. Annual worldwide sales fell from 94m units in 2017 to 90m in 2019. Covid-19 depressed sales by 15% in 2020, to 76.5m, according to IHS Markit, a data firm.

On the bright side, they are expected to rebound sharply this year. The signs are encouraging. Monthly Chinese sales have exceeded last year’s in the second half of 2020. General Motors has led America’s recovery, with sales up by 5% in the fourth quarter, year on year. And electric vehicles are booming, helping Tesla make good on Elon Musk’s pre-pandemic forecast of delivering 500,000 cars in 2020.

Despite the rebound, the industry is not likely to get back to its size in 2019 before 2023. What does that mean for Stellantis (whose largest shareholder, Exor, part-owns The Economist’s parent company)? Size will let it spread the costs of new technology. The savings, forecast at €5bn ($6.2bn) a year, are more important than ever while the industry recovers. Cash reserves will be shored up by the decision of FCA’s investors in September to accept a reduction in the special dividend that was part of the deal, by nearly half, to €2.9bn.

Stellantis also has Carlos Tavares. He has already turned round two loss-making firms: PSA, which he has led since 2014, and then Opel, acquired from General Motors in 2017. His task now is to revive the Fiat brand, which is dependent on Europe and was starved of investment after the merger with Chrysler in 2014. Only the ageing 500 supermini is selling well.

The reticence of both Mr Tavares and Sergio Marchionne, FCA’s late boss, to rush headlong into electrification may also prove wise. Other carmakers had poured cash into electric cars that did not sell well. Now that they are becoming more popular, Stellantis’s plans, including PSA’s new architecture for electric vehicles due by 2023, have more chance of success.

The deal also affords the opportunity to reset strategy, says Jefferies, a bank. The firms are strong regionally, PSA in Europe and FCA in America, but lack global clout. Neither has much presence in China. And in an industry where complexity is now a dirty word, Stellantis will have 15 brands. Volkswagen’s 11 are seen as unwieldy.

Mr Tavares needs to make Jeep a worldwide profit machine like VW’s Audi and Porsche, and to decide what to do about underperforming premium brands. Maserati and Alfa Romeo have defied numerous relaunches to stay peripheral. DS is profitable but has little presence outside France.

Stellantis’s boss must also overcome the clashes of culture that have brought down many a car-industry merger. Marchionne made FCA work through force of personality and the width of the Atlantic, which let him keep the subsidiaries at arm’s length. Mr Tavares does not have that luxury, or Marchionne’s charisma. But his stellar track record shows he has the character to make it happen.■

The Salt That Has Lost Its Savor: The Woke Church and the Undoing of...

The Trump administration is revoking the licenses of companies that supply to Huawei, as...

Ticket brokers settle for $35M over charges of cheating customers

Investors Diurnal Team - January 22, 2021 0
Three ticket brokers based on Long Island have agreed to settle civil charges that they cheated consumers by illegally purchasing tens of thousands of tickets for concerts, theater, sports and other events, and reselling them at substantial markups. Settlements totaling $35.3 million with Just In Time Tickets, Concert Specials and Cartisim – all based in Great Neck on Long Island – and their owners were announced on Friday by the US Justice Department and the Federal Trade Commission. The settlements resolved the first enforcement actions under the Better Online Ticket Sales Act, a 2016 law banning the use of “bots” and other means to evade ticket purchase limits for events imposed by online sellers. Authorities said the defendants had since 2017 purchased more than 155,000 tickets through Ticketmaster, a unit of Live Nation Entertainment, and generated more than $26.1 million in revenue from resales, often at significant markups. The brokers were accused of creating bogus accounts, including under fictitious names, using hundreds of credit cards and deploying automated software to foil Ticketmaster’s efforts to block multiple accounts and non-human purchasers. “Those who violate the BOTS Act cheat fans,” Seth DuCharme, the acting US attorney in Brooklyn, said in a statement.
Business

Investors Diurnal Team - January 21, 2021 0
United Airlines’ stock price plunged Thursday after the coronavirus pandemic drove the carrier to its fourth consecutive quarterly loss. United shares dropped as much as 6.1 percent to $42.41 following the company’s brutal Wednesday earnings report, which showed adjusted net losses of $2.1 billion for the final three months of 2020 and $7.7 billion for the entire year. The fourth-quarter loss of $7 per share came in worse than Wall Street analysts’ expectations for losses of $6.60 a share. Calling the COVID-19 pandemic “the most disruptive crisis in aviation history,” Chicago-based United said it burned through an average of $33 million in cash a day during the October-to-December quarter even as it worked to shore up its finances. The airline said it’s treating 2021 as “a transition year that’s focused on preparing for a recovery.” It has developed plans to slash some $2 billion in annual costs and restarted heavy maintenance on its planes, work that will prove important once demand for travel recovers. But United says the transitional year will get off to a rocky start — it expects first-quarter operating revenue to be 65 to 70 percent below 2019’s levels, while flight capacity will be down at least
Business

Investors Diurnal Team - January 6, 2021 0
China’s government on Wednesday accused Washington of misusing national security as an excuse to hurt commercial competitors after President Trump signed an order banning transactions with payment services Alipay and WeChat Pay and six other apps. Tuesday’s order escalated a conflict with Beijing over technology, security and spying accusations that has plunged US-Chinese relations to their lowest level in decades. It followed confusion in financial markets after the New York Stock Exchange announced last week it would remove three Chinese phone companies and then withdrew that plan Monday. “This is another example of the US’s bullying, arbitrary and hegemonic behavior,” said a foreign ministry spokeswoman, Hua Chunying. “This is an example of the United States over-generalizing the concept of national security and abusing its national power to unreasonably suppress foreign companies.” Beijing will take unspecified “necessary measures” to protect Chinese companies, Hua said, repeating a government statement made following previous US sanctions announcements. It rarely has been followed by action. Trump’s order cites unspecified concerns about apps collecting Americans’ personal and financial data and turning it over to China’s communist government. Hua ridiculed that argument, pointing to US government intelligence gathering. “This is like a gangster who wantonly steals but