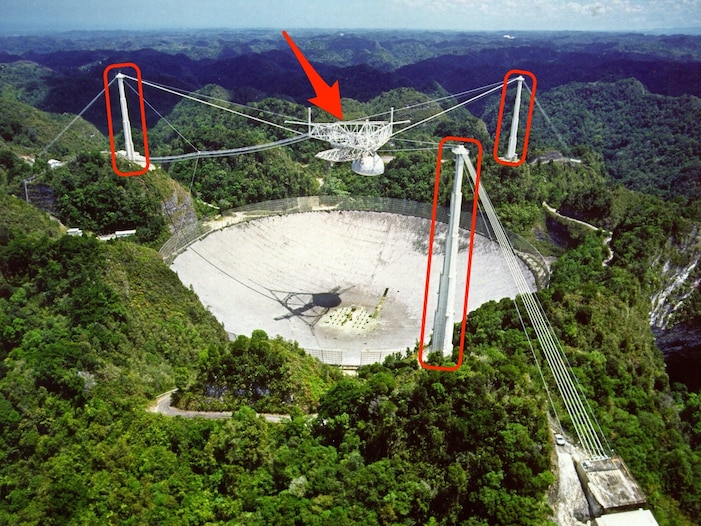 The radio-antenna platform of the Arecibo Observatory in Puerto Rico, as well as three support towers, could collapse catastrophically, falling into the facility’s 1,000-foot-wide dish.

One of the world’s most iconic astronomical observatories has fallen apart beyond repair. Now it threatens to collapse entirely.

Following two unexpected cable breaks, engineers have determined that the Arecibo Observatory’s 1,000-foot (305-meter) radio telescope is so structurally unsound that any workers who try to fix it would risk their lives. So the National Science Foundation, which owns the Puerto Rico telescope, has decided to decommission it.

Now engineers are racing to figure out how to safely deconstruct one of the world’s largest radio telescopes before it collapses on itself. The structure is so unstable that engineers can’t even approach it to evaluate the risk and timing of such a collapse.

“Even attempts at stabilization or testing the cables could result in accelerating the catastrophic failure,” Ralph Gaume, director of the NSF’s Division of Astronomical Sciences, said in a press conference Thursday morning.

In its 57-year lifetime, the Arecibo telescope has hunted for hazardous near-Earth asteroids, searched for signs of alien life, and discovered the first planet beyond our solar system. In 1974, Arecibo beamed out the most powerful broadcast Earth has ever sent to communicate with potential aliens. In 2016, it detected the first repeating fast radio bursts — mysterious space signals that scientists now think come from dead stars.

But Arecibo’s woes began in August, shortly after Tropical Storm Isaias passed over the island. A 3-inch-thick auxiliary cable popped out of its socket on one of the telescope’s three towers and crashed into the reflector dish below. It tore a 100-foot gash in the panels. 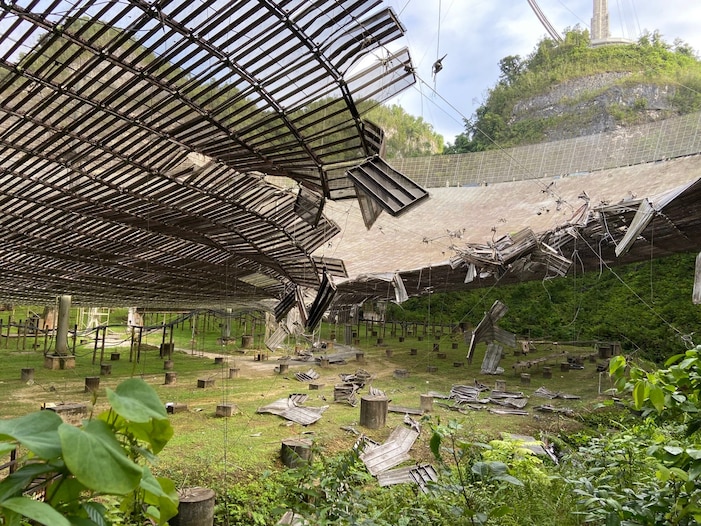 Then in early November, just before repairs were set to begin in earnest, a 15,000-pound main cable from the same tower broke and crashed into the dish. Engineers had thought the structure was still strong enough to avoid a second disaster — and this cable was carrying just 60% of its estimated load capacity — but the failure proved them wrong. They decided they could no longer trust any of the remaining cables.

Both failed cables had been supporting an enormous metal platform hanging over the dish. If another cable from the same tower were to fail, engineers found, the platform would fall with it.

“The entire 900-ton platform will come crashing down into the main disk, and it’s possible that the three main towers themselves, which are over 300 feet tall, will topple,” Gaume said. 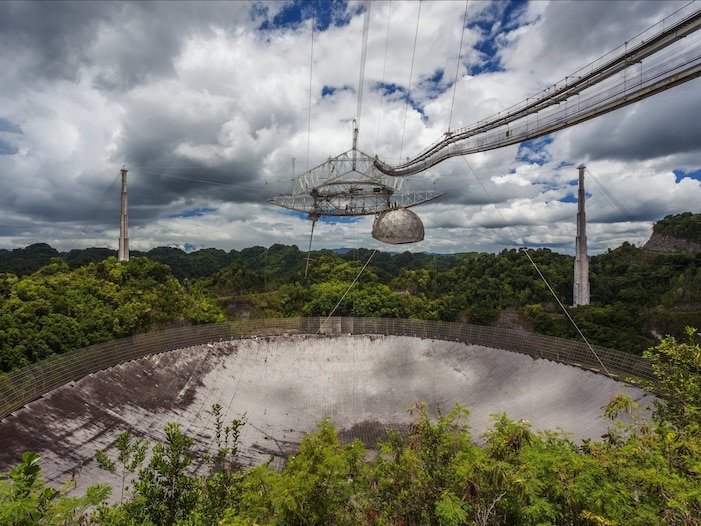 The Arecibo Observatory as seen in 2012. The platform and Gregorian Dome hang over the reflector dish.

Deconstructing the telescope means abandoning any chance of saving it, but it’s the course of action three engineering firms recommended.

“This decision is not an easy one for NSF to make. But safety of people is our number one priority,” Sean Jones, assistant director for the NSF’s Mathematical and Physical Sciences Directorate, said.

By moving quickly, the NSF hopes to salvage a set of buildings that lay directly below one of the telescope’s towers. That way, the Arecibo Observatory can stay open — but without its defining feature.

“When I learned of the news, I was totally devastated,” Abel Mendez, director of the Planetary Habitability Laboratory at the University of Puerto Rico at Arecibo, told Business Insider. He has been around the observatory since he was 10 years old and worked with it professionally for the last decade.

The US has lost its best asteroid hunter and alien seeker

The loss of Arecibo’s telescope is a major blow to humanity’s search for alien life, our ability to defend the planet from asteroids, and the entire field of radio astronomy.

Mendez said that although Arecibo doesn’t discover potentially dangerous space rocks, it’s instrumental in investigating them: The observatory can ping such objects with radar to decrypt their shape, rotation, surface features, and trajectory through space. 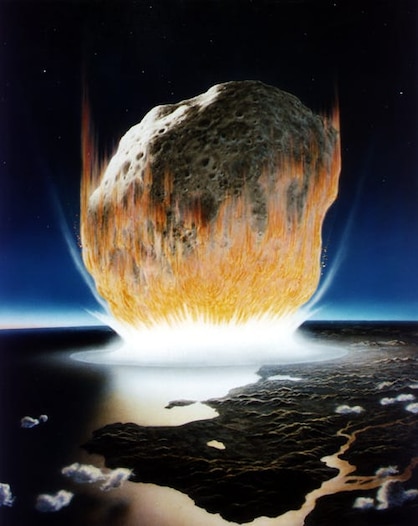 An artist’s depiction of the asteroid impact 65 million years ago that caused the dinosaurs’ disappearance.

Without that data, it’s much harder to know if an asteroid is hurtling towards Earth.

The Arecibo Observatory plans to work with scientists who’d intended to use the telescope to find ways to transfer their research elsewhere, Gaume said. Other NSF facilities — the National Radio Astronomy Observatory in Virginia and the Green Bank Observatory in West Virginia — could potentially take on some Arecibo science.

However, Mendez said that Green Bank is only 10% to 20% as sensitive to weak radio signals as Arecibo. So he thinks the telescope’s death effectively ends the US’s chance at a comprehensive project to search for radio waves from alien technology.

“The only place that we have to do something like that, that’d be sensitive or more sensitive than Arecibo, is now FAST in China,” Mendez said, referring to the Five-hundred-meter Aperture Spherical radio Telescope in Guizhou province. “The United States lost all that capability because it doesn’t have Arecibo.”

“If you are monitoring a source of interest which is in the weak radio spectrum, you need two big radio telescopes: one pointing towards something during the day and the other through the nighttime,” he explained. “If you lose Arecibo, then you lose the ability to monitor — 24 hours a day — a faint source of radio signals.”

He added: “Now we just have one eye.”

‘We’re working against the clock’

It will likely take about five or six weeks to figure out how to safely deconstruct the Arecibo telescope. Engineers will assess their options from afar, with drones snapping aerial photos.

The engineers are also considering ways to buy extra time, such as potentially tilting the towers a few inches to reduce weight on the remaining cables.

The technical reports that spell the death of Arecibo are embedded below.

If engineers can take apart the telescope before it destroys itself, the Arecibo Observatory will still be able to conduct some scientific research. Its LIDAR lasers can study Earth’s upper atmosphere and ionosphere. It also has a facility on the island of Culebra that collects data on cloud cover and precipitation.

Airline Stocks Are No Holiday Deal

Investors Diurnal Team - November 3, 2020 0
Aramco’s net profit plunged 44.6% in Q3 amid the pandemic Crude oil prices hit the nearly 2-decade bottom following the virus outbreak in March Saudi Aramco stock price has extended weekly gains to over 2% despite a tumble in profit Saudi Aramco (SE: 2222) stock price closed the day 0.58% in the green after the oil titan reported third-quarter earnings.  Fundamental analysis: Weak demand due to coronavirus Saudi Aramco posted a 44.6% plunge in net profit in the third quarter as the coronavirus pandemic keeps weighing on demand and crude prices. Are you looking for fast-news, hot-tips and market analysis? Sign-up for the Invezz newsletter, today. Stocks of oil companies plummeted this year as a result of fears among investors over the weak energy demand due to the coronavirus crisis. Oil prices hit the nearly 2-decade bottom following the virus outbreak in March, and have barely recovered since, stimulating oil giants like Aramco, Shell and BP to cut capital spending this year and in 2021. Lower refining and chemicals margins also weighed on Aramco’s net profit, sending it down to 44.21 billion riyals ($11.79 billion) during the three months through September 30, almost matching the consensus estimates of
Markets

Linx Grows 11% in Net Revenue in the Second Quarter of...

Investors Diurnal Team - August 12, 2020 0
Linx closed the 2Q20 with gross revenue of BRL 246.3 million. The indicator is the result of the combination of recurring revenues and services. In 2Q20, total recurring revenue reached BRL 213.1 million, 13.2% higher than the same period in 2019 and equivalent to 87% of gross revenue. Linx's net revenue was BRL 213.5 million, which represented an increase of 10.8% when compared to 2Q19. Adjusted EBITDA reached BRL 60.3 million in the quarter and the adjusted EBITDA margin was 28.2%. Adjusted net income in the 2Q20 was BRL 12.0 million. "Linx turned the crisis into an opportunity through its ability to generate value for the retailer with its end-to-end platform, providing in many cases technologies that guaranteed the continuity of operations, especially with the offering of Linx Digital solutions. As a result, we have seen a sharp acceleration in the digital transformation process in recent months. In addition to partnerships with the most relevant marketplaces in Brazil, Linx launched new offers such as Linx Commerce for Pharmacies with 60,000 pre-registered SKUs, integration with the B2W marketplace. Other existing solutions had a huge increase in demand, such as the Neemo application that was expanded to also serve convenience stores and the Payment Link that can be sent to the customer to make the payment for a purchase via messaging applications and is already integrated with the store's ERP,” explains Alberto Menache, Linx CEO. We continue to operate normally and reaffirm our commitment to the long term, ensuring the safety of our team, service to customers and suppliers, and consequently, to the business. We maintain our company acquisition strategy with a focus on solutions that complete our portfolio of solutions for small businesses and cross-sell to Linx Core customers. About Linx Linx is a Brazilian company specialized in retail technology. Leader in the management software market, with 45,6% of retail market share, as IDC attests. Publicly traded at B3 since 2013, Linx also became the first Brazilian publicly traded software company at NYSE in 2019. The company has more than 3,500 employees distributed among its headquarters in São Paulo, 15 branches throughout Brazil. and 5 countries in America. Visit www.linx.com.br/imprensa. View source version on businesswire.com: https://www.businesswire.com/news/home/20200811005880/en/
Markets