The buzz around hydrogen is making investors look with fresh eyes at the once-staid business of selling industrial gases. Steady returns from established markets are as much a draw as the much-hyped green economy.

Linde
and
Air Liquide
have risen in recent years, partly through blockbuster mergers, to become two of Europe’s largest companies. Like their U.S. peer Air Products and Chemicals, they supply a range of gases for different uses, such as oxygen for hospitals, nitrogen for semiconductor makers, and hydrogen for refineries. It is a defensive business, and Linde and Air Liquide recently released steady third-quarter results. Air Products reports Wednesday. 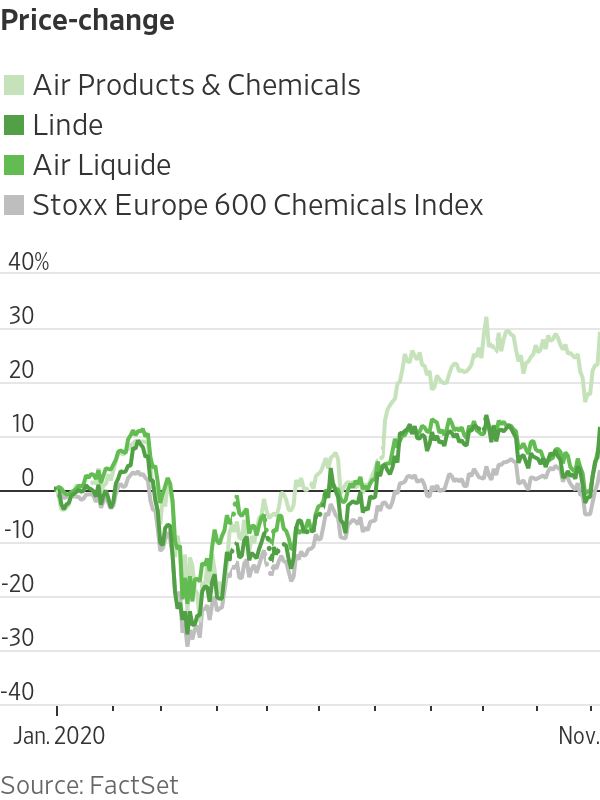 Each company booked about $2 billion in hydrogen sales last year. The versatile, clean-burning gas market could grow 10-fold by 2050 as policy makers step up the fight against climate change. Politicians and executives have promised billions of dollars to help industrialize production and expand its usage into hard-to-decarbonize sectors such as commercial transport, heavy industry and energy storage.

Ironically, a green push could hit the companies’ profits too. Producing industrial gases is a dirty, energy-intensive business. Although all three plan to reduce their carbon intensity, rising carbon prices could cut returns. Competition is also likely to increase:
Royal Dutch Shell,
BP
and other oil companies see hydrogen as a promising new clean-energy business. 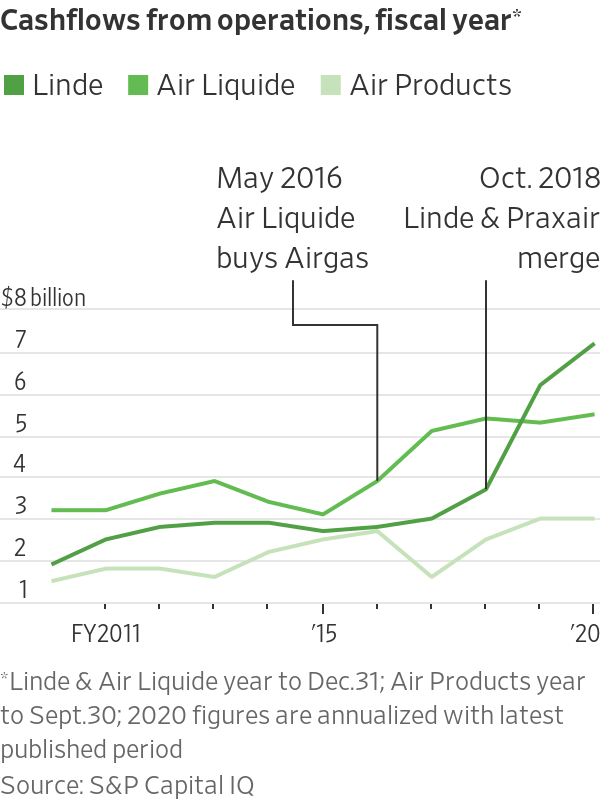 Linde, Air Liquide and Air Products have advantages over newcomers. Hydrogen is very volatile, and they already know how to safely produce, store and transport it. Their current industrial customers are also likely to be hydrogen buyers in the future and they have been investing in clean hydrogen pilot projects and new technologies.

Linde is the global leader after the German company merged with U.S. rival Praxair in 2018. It only funds hydrogen projects that provide double-digit internal rates of return, just like its other investments. Its joint venture with
ITM Power
also provides a link to promising electrolyzer technology used to make carbon-free, or green, hydrogen.

Air Liquide also takes a relatively conservative approach to hydrogen investment, focusing on the production and distribution of the gas, though it also dabbles in refueling stations. The Paris-headquartered company has a stake in electrolyzer company Hydrogenics, which has fuel-cell technology too.

Based in Allentown, Pa., Air Products and Chemicals has a bolder approach, investing in larger hydrogen projects with more experimental technologies. In July, the company announced it will contribute $3.7 billion to the $7 billion project to build a green-hydrogen facility in Neom, a futuristic megacity to be built in Saudi Arabia. Its stock has outperformed its peers this year, perhaps because it has absorbed more of the hydrogen hype. The gas accounts for roughly 25% of its revenue, compared with around 10% for the larger European companies.

Green hydrogen adds a wild card for all three companies, but investors can count on more established businesses to provide steady returns in the many years before it becomes a commercial reality. Industrial gases are typically sold on long-term take-or-pay contracts, or to clients for which they are a relatively low-cost but essential input, such as hospitals or food and drinks producers. Margins are rising in a newly consolidated industry.

All three stocks have outperformed the S&P 500 this year and now trade on between 26 and 31 times forward earnings. If hydrogen hopes bear fruit, that could end up looking cheap. If they don’t, at least investors are left holding high-quality industrial businesses.

China Borrows at Negative Rates for the First Time