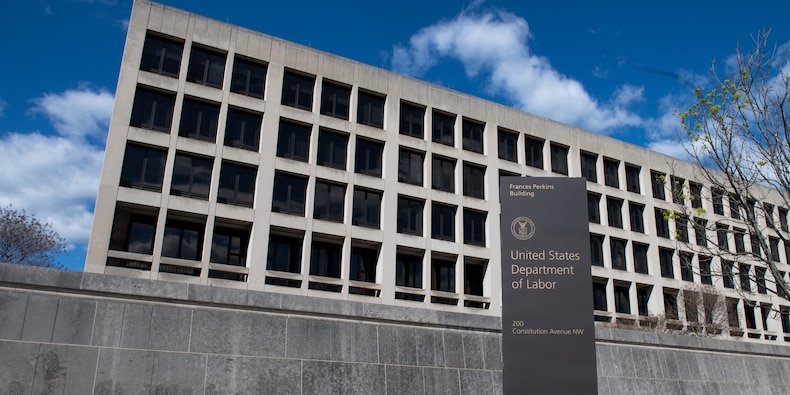 The U.S. Department of Labor building is pictured in Washington on Thursday, April 2, 2020.

The Labor Department’s weekly tally of unemployment-insurance filings has reflected inaccurate data throughout the pandemic, and jobless Americans are being underpaid through the benefits program, the Government Accountability Office said Monday.

The historic number of unemployed Americans applying for benefits has skewed weekly claims figures for months, the government watchdog said in its report. Inconsistent state data, claims backlogs, and potential fraud in the benefits system has resulted in “flawed week-to-week comparisons of total claims numbers,” the GAO added.

Additionally, a program meant to provide benefits to workers who lost their jobs due to the pandemic has been underpaying recipients in most states. Some states paid minimum amounts first and aim to back-pay the rest of recipients’ claims once new tax information is taken into account. Still, average weekly payments through the Pandemic Unemployment Assistance program in September fell below the poverty line in 29 of 41 states reporting data, the GAO said.

Read more: Cheap stocks just had their best month ever. A Wall Street expert breaks down why their outperformance is bound to continue over the next 4-5 years — and listed 2 bargain stocks to buy to capitalize on the trend.

“The expiration of supplemental payments for UI claimants may mean that some households’ income no longer exceeds poverty guidelines,” the watchdog said. “In addition, with the scheduled expiration of certain CARES Act benefits in December 2020, PUA claimants who remain unemployed may face additional hardship.”

The report details dire missteps in tallying and paying unemployed Americans as the coronavirus crisis rages on. Cases continue to soar higher in the US, and economic indicators suggest the pace of recovery has weakened through the fall as states reinstate partial lockdowns.

The GAO’s discovery that most states have been underpaying PUA recipients signals millions of Americans have endured the pandemic recession with less government aid than allocated by Congress.

PUA and an extension to regular benefits are slated to expire at the end of the year, further endangering those left jobless throughout the downturn. Congress reconvened on Monday for a brief session in which it could pass new fiscal support. Both President Donald Trump and President-elect Joe Biden have backed large-scale stimulus packages, but legislators remain worlds apart with respect to the price tag. Senate Republicans led by Mitch McConnell have pushed a $500 billion funding package, but House Democrats continue to back the $2.2 trillion HEROES Act they passed in early October.

Even as the GAO warns of claim backlogs, jobless benefits remain elevated. Claims for unemployment benefits in the week that ended on November 21 totaled 778,000, the Labor Department said Wednesday. The reading exceeded the economist estimate of 730,000 and marked the first back-to-back jump in claims since July.

Though weekly claims counts are down significantly from the March high of nearly 7 million, they’re still well above the 665,000 seen during the worst week of the Great Recession.

To be sure, the GAO noted that repeatedly counting Americans who filed several claims might have resulted in some inflated counts. The agency recommended the Labor Department note in its weekly filings report that the figures “do not accurately estimate” the number of unique Americans claiming benefits. The GAO also recommended the department “pursue options” that more accurately tracks the exact number of Americans receiving benefits.

The Labor Department agreed with the former recommendation and partially agreed with the latter. The department disagreed that it should retroactively report the number of distinct individuals claiming UI benefits, in part because state programs could face challenges in updating its reporting requirements. Still, the GAO noted the department should attempt to revise its prior reports “because they are vital to understanding how many individuals are receiving UI benefits.”

“Without an accurate accounting of the number of individuals who are relying on UI and PUA benefits in as close to real-time as possible, policy makers may be challenged to respond to the crisis at hand,” the watchdog said.

Read more: Buy these 10 stocks set to soar and smash Wall Street’s expectations in the recovery from COVID-19, RBC says

Investors Diurnal Team - November 30, 2020 0
(RTTNews) - The lockup period of Pliant Therapeutics Inc. (PLRX) ends today, i.e. on November 30, 2020. Pliant is a clinical-stage biopharmaceutical company, with two lead assets namely PLN-74809 and PLN-1474. 1. PLN-74809 is under the following clinical trials: -- A 12-week phase IIa trial of PLN-74809 in idiopathic pulmonary fibrosis. -- A phase IIa trial of PLN-74809 using PET imaging in idiopathic pulmonary fibrosis. The preliminary data from this trial is expected by the first half of 2021. -- A 12-week phase IIa trial of PLN-74809 in primary sclerosing cholangitis. -- A phase IIa trial of PLN-74809 in patients hospitalized with severe and critical COVID-19. 2. PLN-1474 PLN-1474 is being developed for the treatment of liver fibrosis associated with nonalcoholic steatohepatitis, or NASH. This compound is being developed in partnership with Novartis (NVS). -- A phase 1 trial of PLN-1474 in healthy volunteers is nearing completion. The topline data from the phase I trial is expected by the first quarter of 2021. The company made its debut on The Nasdaq Global Select Market on June 3, 2020, offering its shares at a price of $16 each. As mentioned above, the 180 day lockup period expires today. PLRX opened the first day of trading (i.e. June 3, 2020) at $25 and closed at $21.30 that day. The stock has thus far hit a low of $19.42 and a high of $35.63. PLRX closed Friday's trading at $32.99, up 10.82%.
Commodities

Investors Diurnal Team - November 27, 2020 0
Crude oil prices are trading at the highest levels since March on positive news related to Covid-19 vaccine and diminishing concerns over weak demand next year. Fundamental analysis: Improving risk sentiment  Crude oil prices gained on the announcements from three major drugmakers including Pfizer-BioNTech, Moderna and Oxford that the coronavirus vaccine rollouts could begin in December.  Are you looking for fast-news, hot-tips and market analysis? Sign-up for the Invezz newsletter, today. “Despite a number of strong fundamentals rallying the markets, especially vaccine development supporting oil, bearish concerns remain,” said Avtar Sandu, senior commodities manager at Phillip Futures. Sandu cited various risk factors for the buyers including the reintroduction of lockdown measures amid the second wave, increasing number of rigs employed in the U.S. as well as elevated output in Libya.  Oil stockpiles in America dropped by 754,000 barrels a week ago, as opposed to Reuters poll predictions that projected a 120,000 barrel increase. Moreover, stockpiles at the Cushing, Oklahoma, WTI’s delivery point, plummeted by 1.7 million barrels.  Oil investors are waiting for the next OPEC+ meeting, which is scheduled for next week. OPEC+, consisting of OPEC member states and Russia, agreed to hold informal talks tomorrow ahead of
Commodities

Investors Diurnal Team - November 25, 2020 0
Silver price is trading over 3% lower this week to test the key short-term support near the $23 mark. Fundamental analysis: Silver price may go up in 2021 Silver has performed differently during various recessions and bear markets throughout history. For example, during the stagflation crisis between 1976-78, the S&P 500 declined by 19.4% while silver rose by more than 15% during that time.  Furthermore, during the financial crisis between 2007 and 2009, the S&P 500 tumbled by 56.% while silver ticked up 1.1%. On the other hand, there were also periods of economic turmoil when silver didn’t perform as well.   This year was good for silver as the metal managed registered an outstanding 50.1% increase during the first nine months. Still, it’s also hard to say how silver will do during the upcoming 12 months.  Even though it recorded an incredible performance in 2020, some analysts believe its price could tumble quickly if the U.S. equities market faces another collapse like the one seen in the spring after the coronavirus outbreak.  On the other hand, analysts feel bullish when it comes to short-to-medium term silver performance. If the global economy shows good recovery progress, silver’s bullish trend could