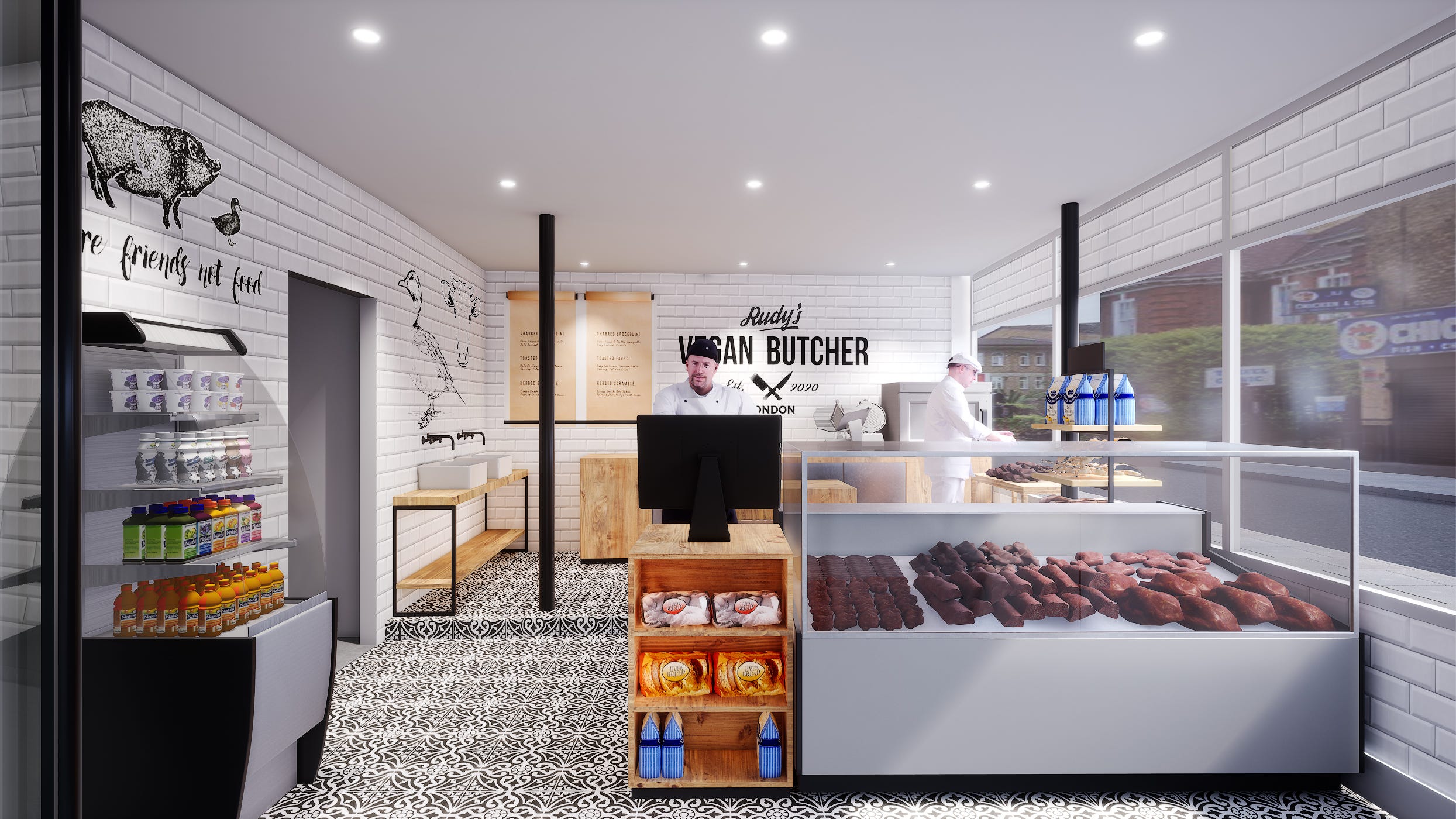 It may look like a traditional butcher selling rows of fresh meat – but Rudy’s in Islington, London is strictly vegan.

It will become the UK’s first vegan butcher when it opens on Saturday to mark World Vegan Day. 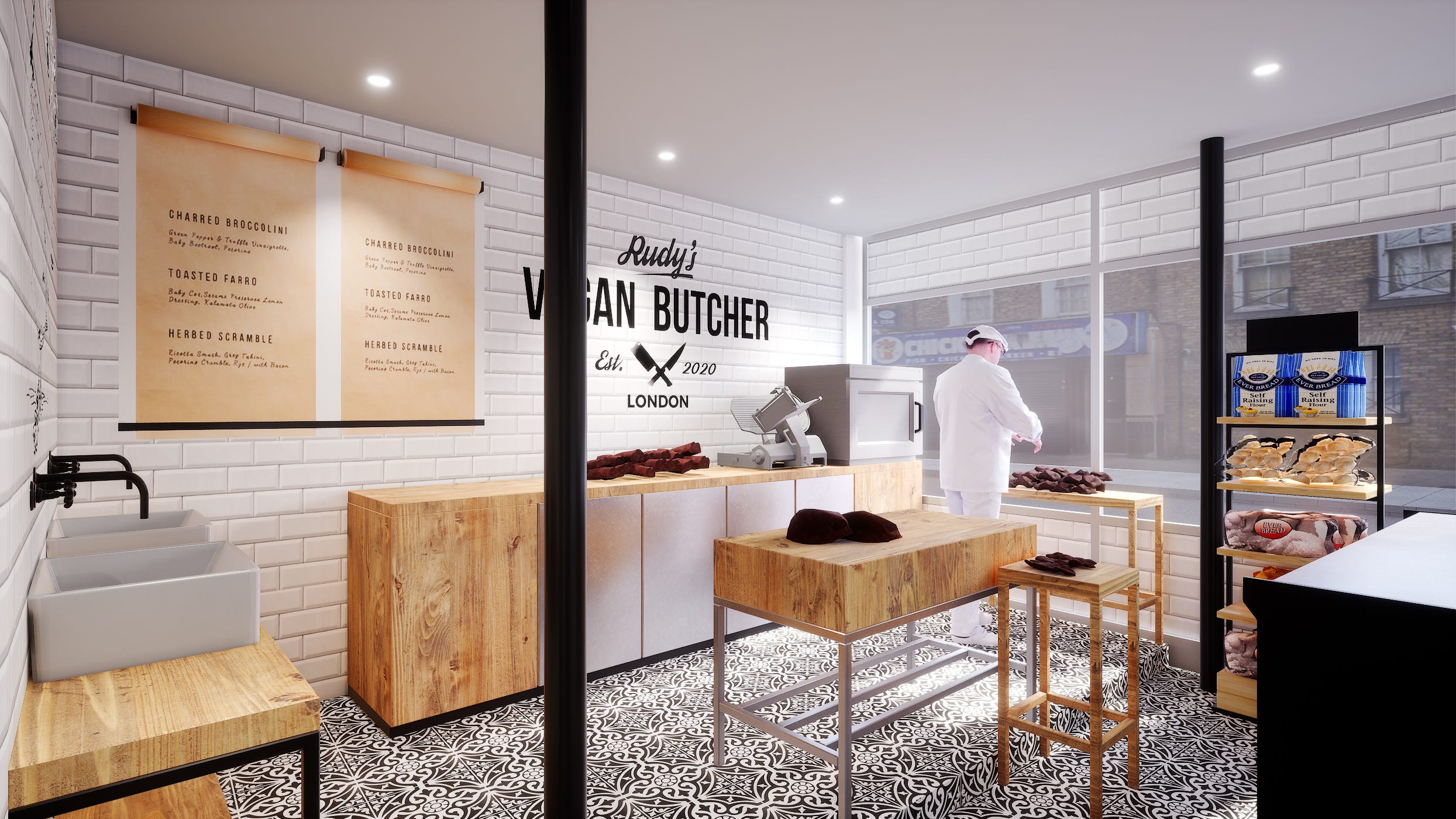 The store looks like a traditional butcher shop, but only sells meat-free alternatives.

The butcher sells only meat-free alternatives of traditional butcher products.

These includes vegan versions of pulled pork and meatballs alongside ready-made meals like “lobstah” salad and “chilli-non-carne.” 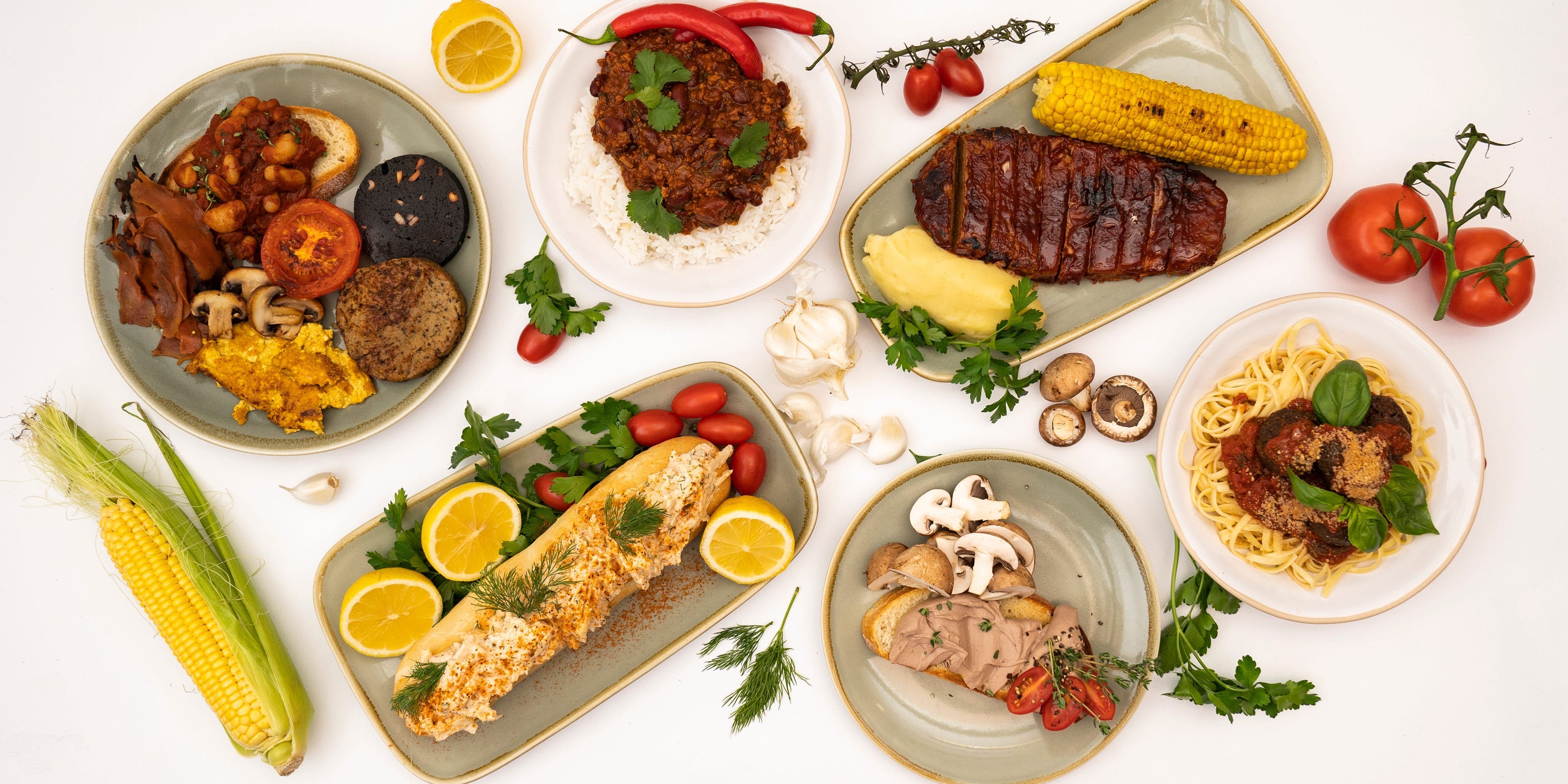 Vegans can use the ingredients to make Full English breakfasts at home, as well as cruelty-free versions of many other meat-based dishes.

The substitutes are made from soya and seitan, and are designed to mimic the texture and taste of meat.

The store sells everything you need for a vegan Full-English breakfast, it says, with meat- and dairy-free remakes of bacon, scrambled eggs, black pudding, and sausage. 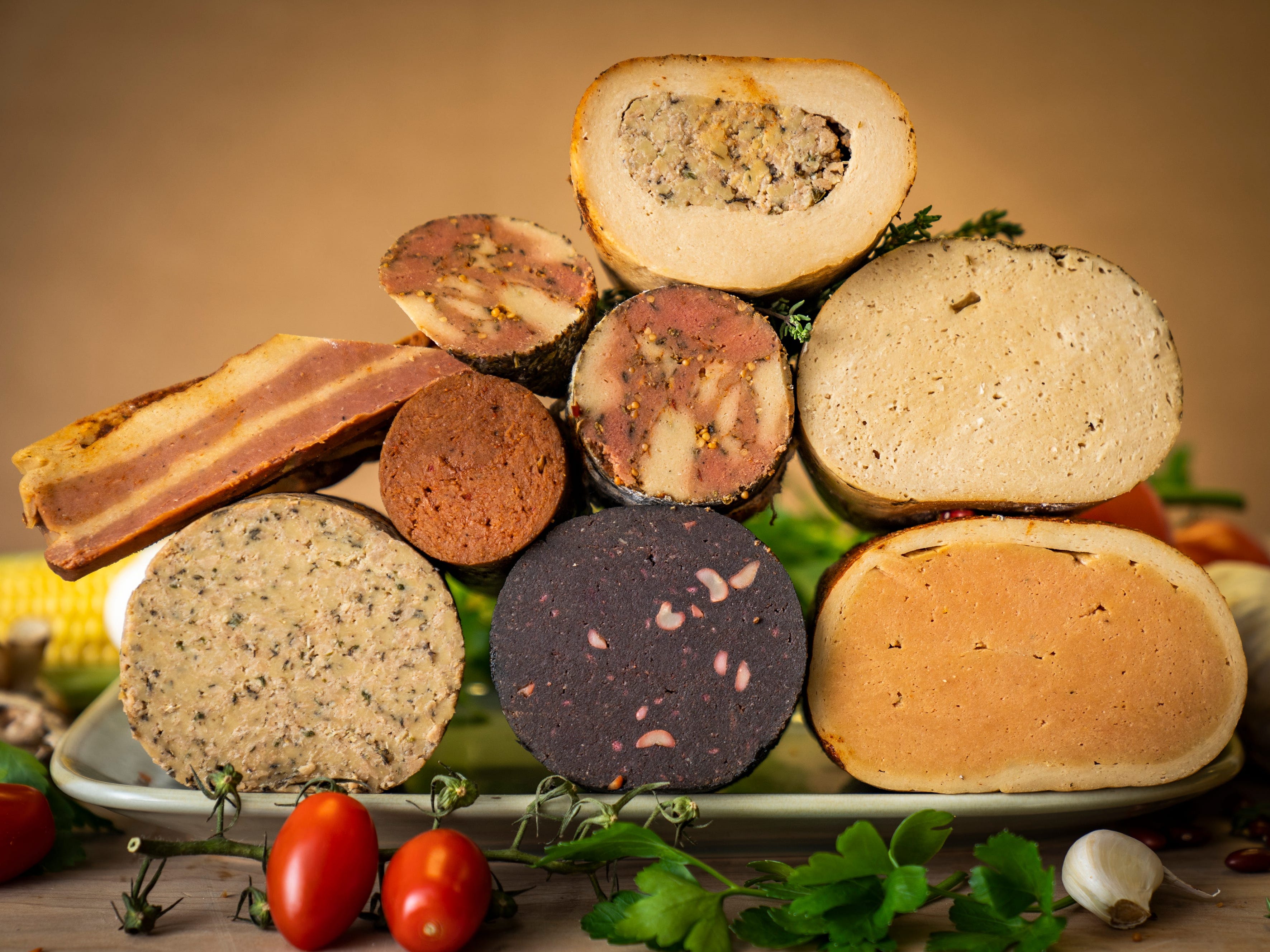 The butcher sells a vegan version of black pudding, a type of blood sausage.

The butchers even has a charcuterie section selling vegan smoked ham, salami de provence, pepperoni, and pastrami, and offers vegan turkey for the upcoming holiday season. 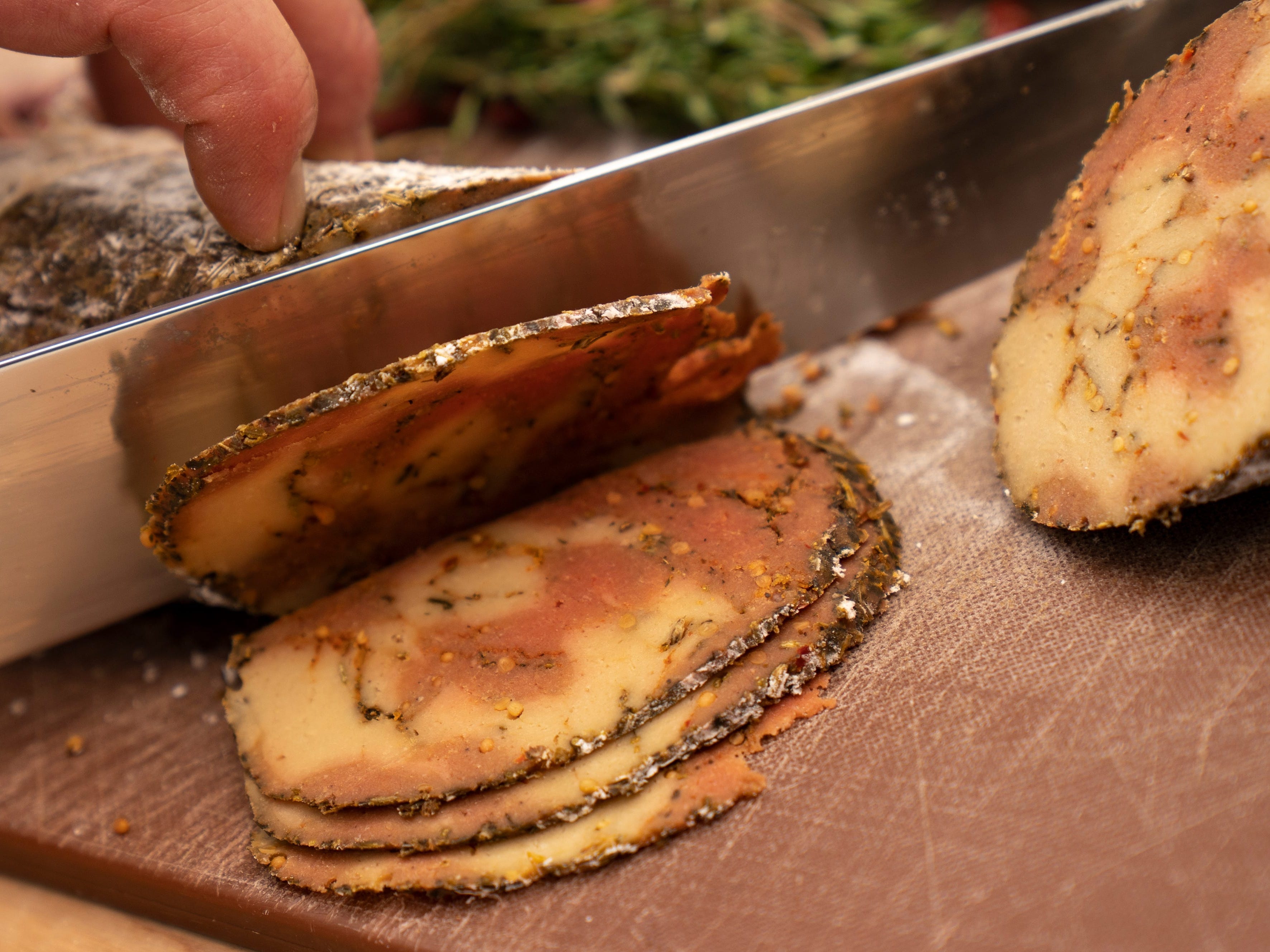 The butcher will send a range of vegan charcuterie products.

Rudy’s has tweaked the name of many of its products to emphasize their vegan nature, such as “chick’n lover” pâté.

The butcher is delivering to the rest of the UK, too, and says that every order placed on its first day will include a free pack of “baycon.”

The butcher follows the success of its owners’ American-style diner of the same name in London’s Camden area. The diner opened in April 2018 and sells vegan hot dogs, mozzarella sticks, buffalo wings, and milkshakes. 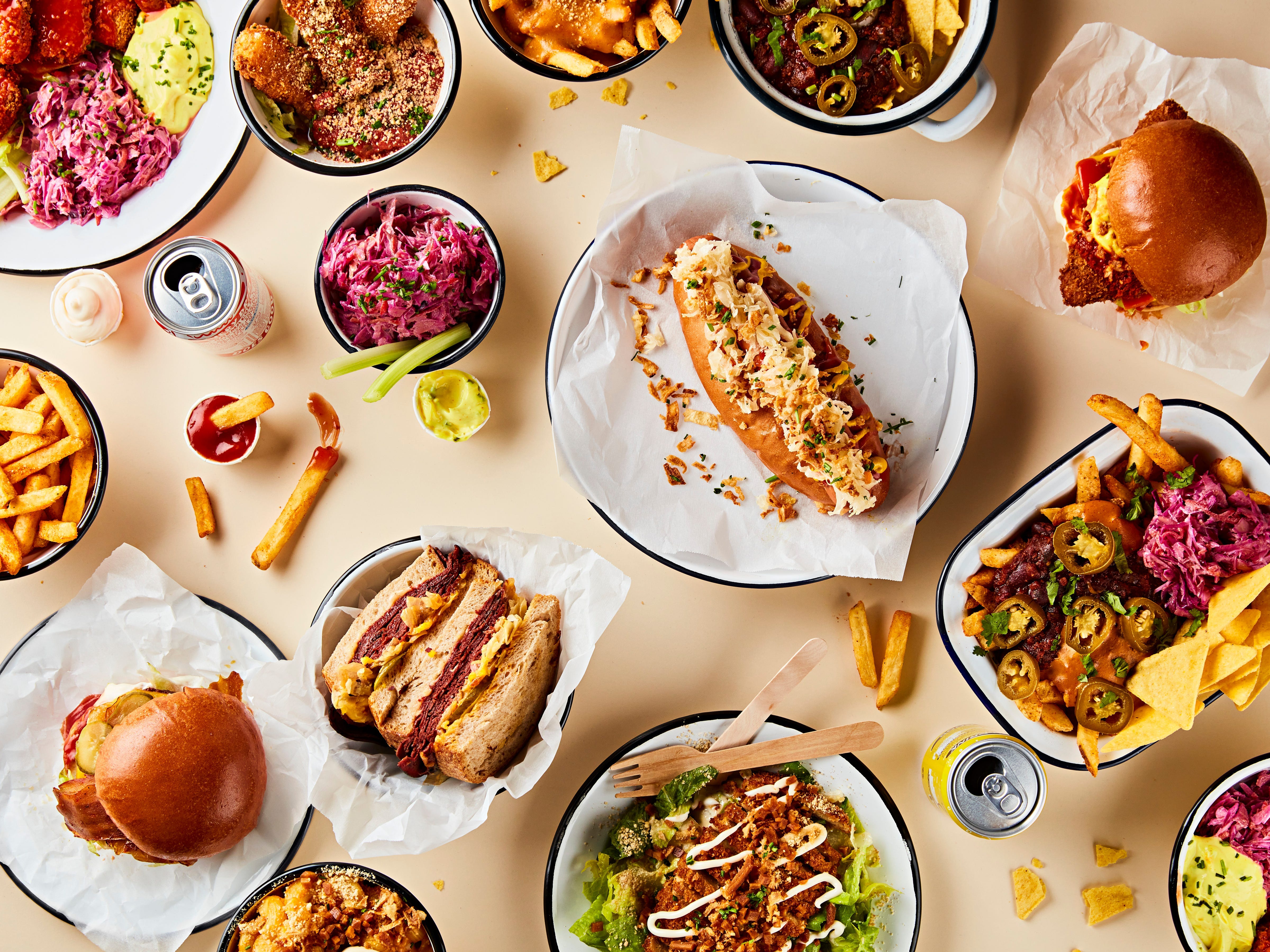 The owners of the butchers also launched a vegan diner in London in 2018.

UK plant-based boom despite only 1% of Brits being vegan

Almost a quarter (23%) of all new UK food product launches in 2019 were labeled as vegan, its research found.

Around 1% of Brits are vegan, Mintel said in January, adding that this hadn’t risen much in the past two years. The higher demand has instead come primarily from the rising popularity of “flexitarian” diets, said Kate Vlietstra, Mintel global food and drink analyst.

“Many consumers perceive that plant-based foods are a healthier option, and this notion is the key driver behind the reduction in meat consumption in recent years,” Vlietstra said.

The Trump campaign just ran an ad that appeared to imply the president won...

Investors Diurnal Team - October 30, 2020 0
WINOOSKI, Vt., Oct. 30, 2020 (GLOBE NEWSWIRE) -- Reading Plus, a research-backed online program that uses personalized instruction to improve students’ reading proficiency, today announced it earned the Research-Based Design product certification from Digital Promise, a nonprofit developed to spur innovation in education and improve the opportunity to learn for all through technology and research. The certification is awarded after passing a rigorous assessment process and serves as a reliable signal for district and school administrators, educators, and families looking for evidence of proven educational technology products. Reading Plus develops students’ comprehension, vocabulary, stamina, and motivation. It is the only literacy program that addresses silent reading fluency and the physical aspect of reading – the way the eyes move across a page – which impacts a student’s ability to process and retain information. Reading Plus’s patented Guided Window scaffolds the reading experience by directing the reader’s eyes, strengthening necessary visual skills associated with reading efficiency. Reading Plus’s program is validated by more than 100 research studies, including 38 peer-reviewed journal articles and conference presentations. “Decades of pioneering research on silent reading fluency is the cornerstone of Reading Plus,” said Dr. Alexandra Spichtig, chief research officer of Reading Plus. “It propels our program forward to help students across the country improve their reading proficiency over two grade levels in a single school year. The Research-Based Design product certification from Digital Promise showcases our commitment to rigorous research.” To meet the Research-Based Design product certification criteria, Reading Plus proved that it consulted research about learning to inform product design; developed a theoretical framework, such as a logic model or theory of change, grounded in this research to drive product planning; and that it publicly communicates the program’s research basis. Digital Promise launched the Research-Based Design product certification in February 2020. It uses a competency-based learning framework developed in consultation with the nonprofit’s Learner Variability Project advisory board, expert researchers in the learning sciences field, and nearly 50 educators across the United States. More information on Digital Promise’s product certifications can be found at https://productcertifications.digitalpromise.org/. To learn more about the benefits of the Reading Plus program, visit https://www.readingplus.com/. ABOUT READING PLUSReading Plus is a research-proven, online program that provides personalized intervention and instruction for students, improving reading proficiency between 2.0 to 2.5 grade levels in a single school year. Reading Plus develops comprehension, vocabulary, motivation and stamina, while also going beyond the offerings of other literacy programs by addressing silent reading fluency. It supports students with diverse needs, including English learners, special education, RTI/MTSS tiers 1-3, and advanced readers. Reading Plus provides educators with an easy-to-use management and reporting system, extensive resources to guide differentiated instruction, professional development and highly-rated customer support. The Reading Plus program is used in more than 5,000 schools nationally, helping over 1 million students become efficient, confident, lifelong readers. For more information visit www.readingplus.com.
Markets

Deutsche Bank Turns To Profit In Q3; On Track To Meet...