The aviation crisis triggered by 9/11 eventually made budget carriers the undisputed leaders in leisure flights. Covid-19 could give them the keys to business travel.

Three major U.S. carriers, United Airlines,
Delta Air Lines
and
Southwest Airlines,
recently warned that sales are deteriorating as the winter season approaches. But demand for cheap holiday flights could bounce back once a vaccine is distributed, as it did when lockdowns were eased this summer.

Business travel is another story. Airline executives believe that increased use of videoconferencing could take a permanent 15% bite out of the market. The battle for this shrinking pie could reshape the most profitable part of their industry. 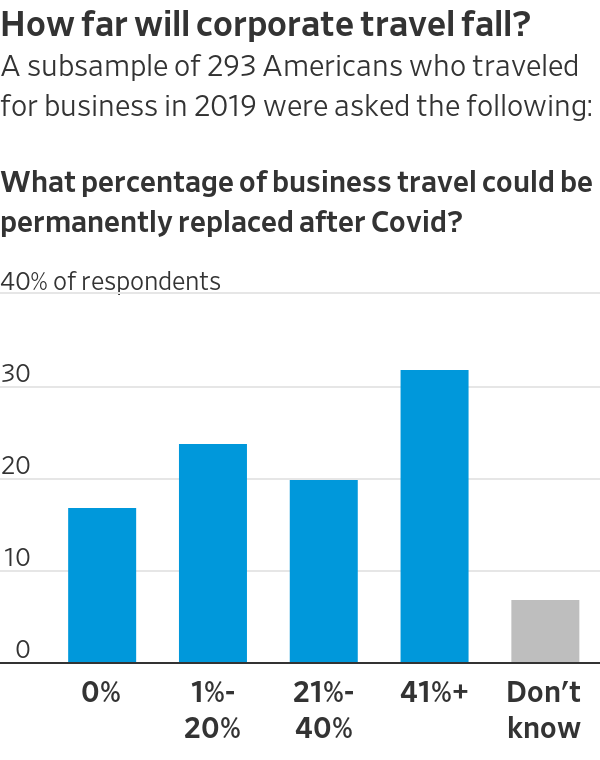 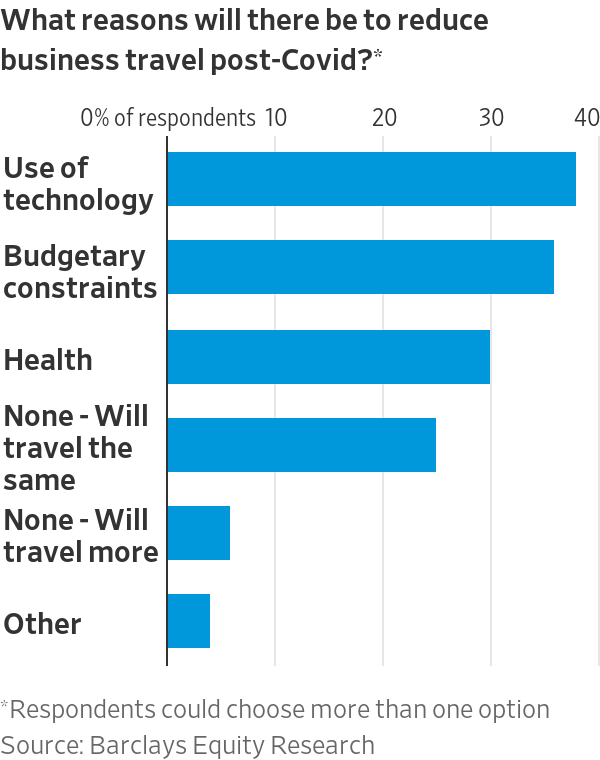 In a recent survey,
Barclays
found that more than half of Americans who flew for business in 2019 expect a 20% or greater fall in such travel after the pandemic. Technology was the most commonly cited reason, with budgetary restraint in second place. Data by business-spending management firm
Coupa Software
shows that, among the few tickets bought by corporate accounts in the third quarter, the average fare was 45% cheaper than a year earlier.

Greater price-sensitivity in corporate bookings is an opening for budget airlines. Southwest is already increasing its presence at Chicago O’Hare, a hub claimed by both United and
American Airlines.
It is also threatening United at Houston and American at Miami.

Southwest has already spent a decade expanding in main airports, particularly after acquiring AirTran Airways in 2011. In recent years, its network connectivity has become more concentrated in top airports, including legacy hubs in Atlanta and Washington, D.C., a data analysis reveals. 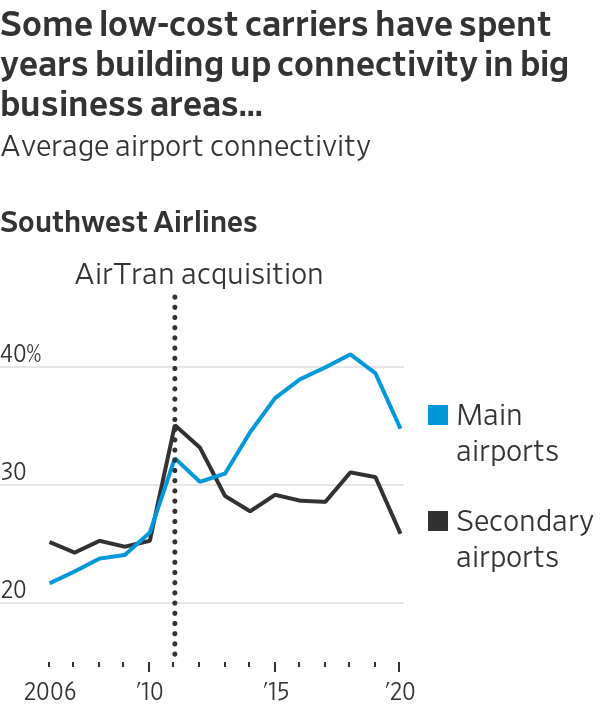 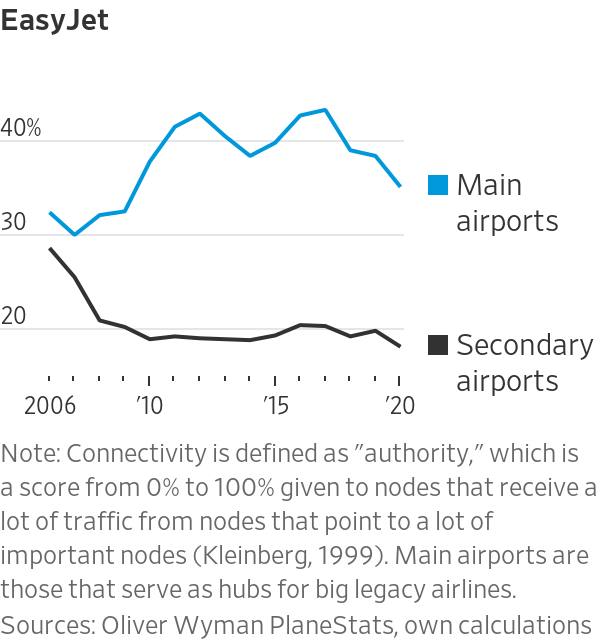 Such strategies haven’t always been successful, though. Business travel is the turf of legacy carriers dedicated to feeding traffic to hub airports. In the U.S. last year, airports with capacity constraints represented 22% of traffic, official data shows. In Europe, it was 74%.

Covid-19 has changed the picture by leaving even the busiest airports with plenty of space. Budget airlines are well placed to fill it because they have more cash and less debt.

Ultralow-cost carriers like
Spirit,
Allegiant,
Ryanair
and
Wizz Air
might be wary of assaulting business hubs, where expenses are higher. They could instead focus on their traditional tactic: squeezing hollowed-out secondary airports. But Southwest caters to a slightly higher-cost segment. It even has business fares with extra perks. In 2019, 35% of its revenue came from companies, Barclays estimates, which is in between mainline operators at 50% and Spirit and Allegiant at 10%.

JetBlue,
with its successful premium Mint product, is another U.S. low-cost player well positioned to nibble away at this market. 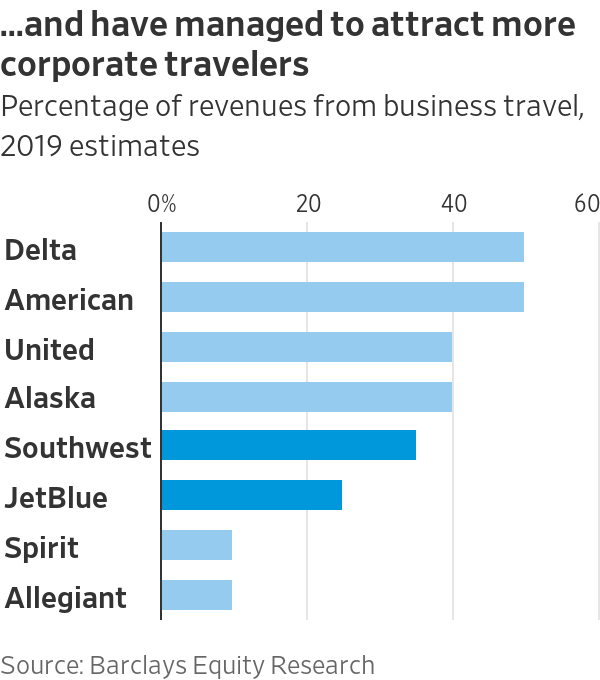 In Europe, London-based
easyJet
champions this “hybrid” strategy. It combines low costs with offers such as extra legroom on certain seats and a focus on big business cities. Before Covid-19, it had increased its connectivity in hubs like Paris’s Charles de Gaulle and Amsterdam’s Schiphol, at the expense of the rest of its network. So far, though, easyJet has chosen to retrench rather than attack, because its balance sheet isn’t pristine.

A risk for hybrid players is that their own leisure business could be undercut by ultralow-cost operators. Those rivals are now waiving change fees—one of Southwest’s signature customer benefits.

Heard on the Street

Agenda-setting analysis and commentary on the biggest corporate and market stories.

When do you expect the airline industry to recover from the shocks of the pandemic, if at all? Join the conversation below.

Regardless, flying is no longer a two-stream market. U.S. legacy airlines themselves have spent years phasing out first-class cabins and segmenting customers into a wider range of products. The strategy made money, but may also have whetted the appetite of corporate clients for cheaper options.

“It’s a deterioration of the premium product,” said Pere Suau-Sánchez, a lecturer in air-transport management at the U.K.’s Cranfield University. “A lot of the boost in ‘premium economy’ seats is from companies that don’t want to pay for business class.”

Even a small loss of corporate business at key airports could destroy the connectivity of legacy players’ carefully crafted networks, making some international routes unprofitable. After a lucrative period of truce, the airline industry may be ripe for a new war.

More Heard on the Street

Bill Ackman ‘bullish’ on 2021 but sees volatility in coming months

Investors Diurnal Team - November 11, 2020 0
Two critical unemployment programs are set to expire at the end of the year, potentially leaving millions of Americans vulnerable to eviction and hunger and threatening to short-circuit an economic recovery that has already lost momentum.As many as 13 million people are receiving payments under the programs, which Congress created last spring to expand and extend the regular unemployment system during the coronavirus pandemic. Leaders of both major parties have expressed support for renewing the programs in some form, but Congress has been unable to reach a deal to do so. It remains unclear how the results of Tuesday’s election will affect prospects for an agreement.That means that for now at least, people like Randy Williams must prepare for the possibility that they are weeks away from losing their only income.Mr. Williams, 56, lost his job as a manager at a Memphis-area Cracker Barrel in the first weeks of the pandemic. His state jobless benefits ran out last month, leaving him to rely on a 13-week extension under the federal Pandemic Emergency Unemployment Compensation program, which ends in late December.Already, Mr. Williams is struggling to get by on his $275 weekly benefit check, the maximum allowed in Tennessee. He has