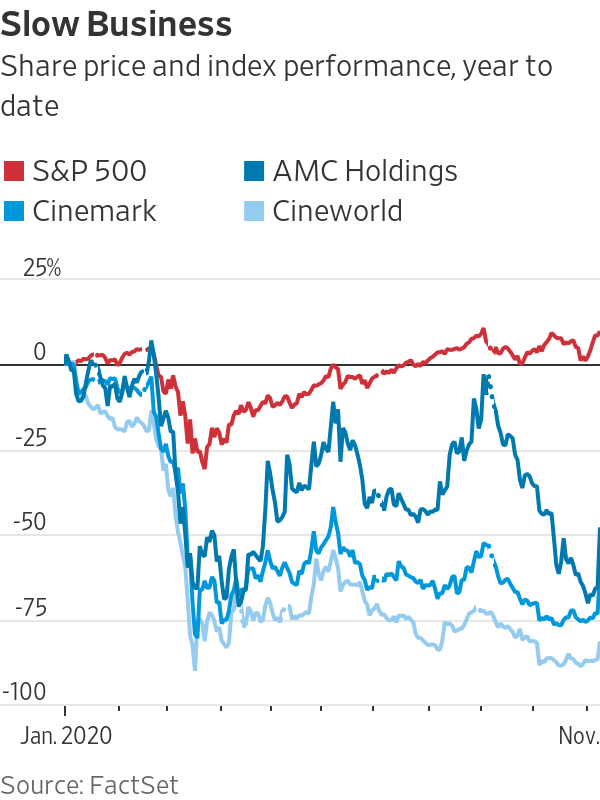 Beleaguered movie-theater operators could finally get the happy ending they’ve been looking for—provided they survive a long, hard winter.

Shares of the three largest U.S. chains rocketed to life Monday following the big news of a breakthrough on a Covid-19 vaccine.
Cinemark Holdings
and U.K.-listed Cineworld Group each jumped more than 40%, while
AMC Entertainment
surged 51% by the closing bell. Those were significantly bigger bounces than those seen by other downtrodden in-person entertainment groups such as theme-park and cruise-ship operators. Concert promoter Live Nation rose by just 15%.

Some of the difference is understandable. Movie theaters could see a return to normal levels of business sooner than the aforementioned industries since they generally don’t pack thousands of people into a single room or structure. And the timing is good: Cinemark and AMC both reported results last week and used those opportunities to broadcast hopes that business would return to something like normal by the middle of next year. Hollywood studios have already shifted several big releases to that window. Without a vaccine, though, those dates looked aspirational. Producers of the oft-delayed James Bond vehicle “No Time to Die” reportedly have been shopping the movie to streaming services even given the film’s current theatrical release date of April 2.

Yet movie exhibitors still face a large risk of permanent disintermediation. The pandemic has accelerated adoption of streaming and has even wrought changes on fiercely guarded release windows. Moreover, some chains are under serious financial strain. AMC Chief Executive Adam Aron said on his recent earnings call that the company will need to raise more capital “to assure ourselves that we can lengthen our financial runway at least in the next summer.” That was after AMC raised $98 million through a stock sale just last month.

The recovery of the Chinese movie market offers some encouragement that fans will return, once it is safe to do so. The pandemic also has forced the industry to adapt better to the streaming age. AMC struck a deal with movie studio Universal to participate in the digital side of its business in exchange for shortening release windows, while Cinemark Chief Executive Mark Zoradi spoke last week of “dynamic windows” that would keep popular movies in theaters longer while allowing shorter-lived releases to hit streaming channels earlier. It also helps the chains greatly that studios have now amassed a pile of movies with blockbuster budgets that need to generate a return.

A lot of players need this show to go on.

As movie theaters sit empty during the coronavirus pandemic, some films are being released direct to streaming services and digital platforms, shaking up a distribution model that’s been in place for decades. WSJ explains. (Originally Published May 6, 2020)

Sony CEO on PlayStation 5: ‘Absolutely everything is sold’

Wendy Sterling, BA, CPCC, ACC is recognized by Continental Who's Who

The rise and fall of Ruby Tuesday, which just declared bankruptcy after struggling through...

Investors Diurnal Team - November 28, 2020 0
Jim Curran in Malvern, Pa., lost his job in March and got permission to pause his mortgage payments, freeing up thousands of dollars a month, with no damage to his credit score. Patricia Orndorf in St. Louis Park, Minn., also lost her job in March. Her bank let her temporarily skip her credit-card bill, which had a minimum monthly payment of roughly $100, through July. But interest still piled up, and late fees for August, September and October added to her balance. The federal government helped millions of Americans through the early months of the pandemic by allowing them to defer payments, with little negative effect, on mortgages and student loans, two markets in which it holds huge sway. But the government’s reach doesn’t extend to credit-card lending, auto loans or personal loans, and borrowers with those forms of debt ended up with much less relief.
Economy