The stock market’s star performers are shining brighter than ever and creating a stark divide with the rest of the pack.

More stocks skyrocketed at least 400% at some point in the first three quarters of the year than in any comparable period since 2000, according to a Dow Jones Market Data analysis of companies that were worth at least $100 million to start the year.

Dominating the list are technology and biotech companies, as well as firms that have benefited from changing tastes during the coronavirus pandemic. So far this year,

has rallied 584%, while online retailer

Highlighting the wild ride that many companies have been on, Overstock, for example, was up 1,677% at its high point this year.

To compare, the S&P 500 is up 3.2% for the year, while the Dow Jones Industrial Average is down 3.8%. The indexes are both on pace for gains of more than 6% for the third quarter.

Nasdaq Composite, each stock’s percentage change in 2020
With percentile ranking by current market value
Note: Excludes stocks that were not trading at the end of 2019. Market values range from $2 million to $2 trillion. Darker shades reflect clusters of overlapping dots.
Source: FactSet

Of the roughly 2,500 stocks included in the Nasdaq Composite Index, more than 1,000 suffered declines of at least 50% this year at their low points.

Among the run-ups of more than 400%, there were 21 health-technology stocks, which include biotech, medical and pharmaceutical companies. The sector also accounted for five of the top six increases.

FALLING BACK TO EARTH

The rally has slowed in recent weeks. Although many share prices remain sharply higher, the majority of stocks that had risen as high as 400% have now receded below that level. 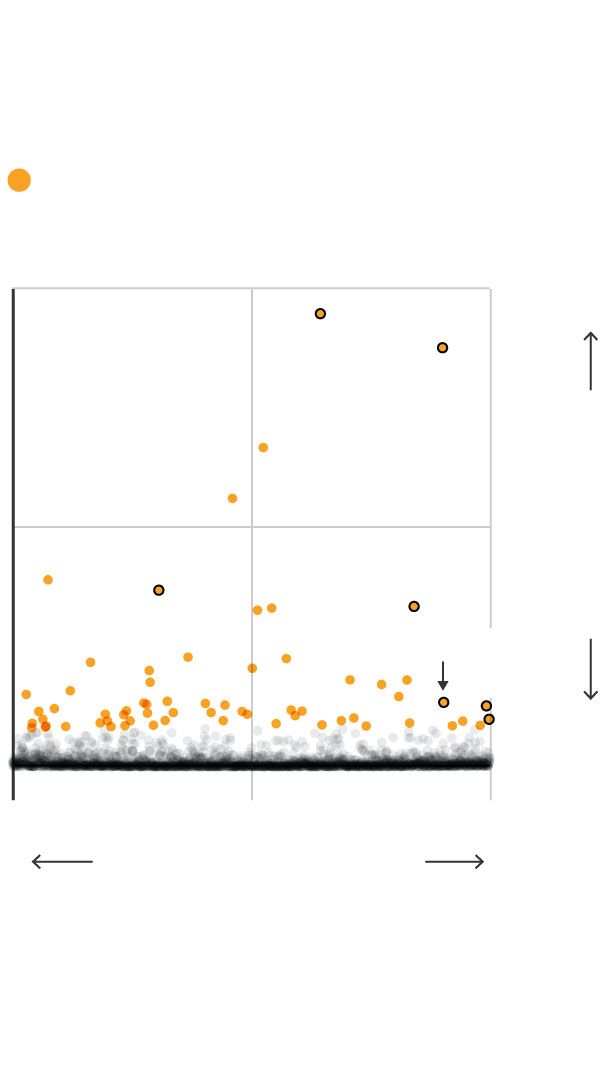 percentage change in 2020 at its peak

With ranking by current market value

Stocks that rose at least 400% at peak

Note: Excludes stocks that were not trading at the end of 2019. Market values range from $2 million to $2 trillion. Darker shades reflect clusters of overlapping dots.

The run among the highfliers is one that few saw coming, underscoring many of the unusual dynamics at play in markets this year. The pandemic brought economic activity to a halt, and corporate profits are expected to decline 18% this year from last—the steepest fall since 2008.

The lackluster economy—and meager expected returns in other corners of the market, including bonds—has triggered a rush into shares of companies promising high growth in the future, including those that are brand new to the public markets. Initial public offerings are on track for a banner year, with new companies posting the biggest gains during their trading debuts since 2000, The Wall Street Journal recently reported.

“The rate at which momentum and enthusiasm and exuberance took hold over the summer…it hit a fever pitch that I have not seen in the five years that I’ve been managing my fund,” said

, a portfolio manager at T. Rowe Price, who oversees a growth-focused fund at the firm.

Much of this frenzy has stemmed from individual investors, many piling into the market for the first time during the pandemic. These investors have often favored tech stocks as well as shares of companies that they view as lasting winners of changes forced by the pandemic. They recently made up the biggest chunk of market activity than at any time over the past 10 years.

Some of those investors and others aren’t just buying their favorite stocks—they are aggressively betting on bigger gains through the options market, at times even driving the underlying stocks higher and helping send derivatives activity to a record.

unveiled plans to split their stocks, unleashing even more zeal for shares that had already soared this year and stoking rare dynamics in the stock and derivatives markets.

At their individual peaks in 2020, more than 60 stocks in the tech-heavy Nasdaq Composite had risen at least 400%. But the gap between the star performers and the losers is wide. Of the roughly 2,500 stocks in the index, more than 1,000 suffered declines of at least 50% for the year at their low points.

Some excitement for the broader stock market sputtered in September as stocks slid for four consecutive weeks, roiled by the tech giants that had powered major indexes higher in prior months.

made a splash in its initial public offering, with its shares more than doubling on its first day of trading on a stock exchange.

The rally at times has drawn comparisons to the dot-com bubble, when shares of technology companies notched huge gains before plummeting. The S&P 500’s information-technology sector has the biggest weighting in the stock-market index than at any time since 2000, according to Dow Jones Market Data. Meanwhile, the heft of groups including financial and energy companies have steadily dwindled to the lowest levels since at least 1990.

The strong gains in individual stocks has in part been fueled by the momentum trade, which entails buying shares of companies that have soared the fastest and furthest. About $18 billion was recently sitting in funds tracking the trade, roughly triple the level from five years ago, FactSet data show.

Some investors have said buying stocks at high prices and attempting to sell even higher can be tough to stomach. But taking the plunge has paid off as the stocks’ rallies continued, defying expectations.

“The managing director of the firm came to me and said: ‘Seriously, we’re buying Tesla at $800?’” said Mr. Malmgren. “You’re buying at the highs…it takes courage.”

But, he said, it ended up being a profitable position. Tesla’s shares closed Tuesday at $419.07, equivalent to $2,095.35 a share ahead of the recent stock split.

T. Rowe’s Mr. White says he passed on an opportunity to buy shares of Zoom in March but decided to take on a position in June around the time the company beat earnings expectations. By early June, the stock had already rallied 200% since the start of the year.

“I kept a pretty small position because I didn’t want to make a heroic bet at what could have been the top,” said Mr. White. “In hindsight, the stock was actually pretty cheap at $200.”

Are you planning to invest in Overstock.com, Zoom Video Communications or Tesla? If yes, which of the three did you choose and why? Join the conversation below.

Write to Gunjan Banerji at Gunjan.Banerji@wsj.com

How CarMax is using digital tools to empower employees to serve customers online and...

28 books by billionaires that will teach you how to build a fortune and...

How CarMax is using digital tools to empower employees to serve...

Investors Diurnal Team - October 16, 2020 0
BNY Mellon’s per-share earnings slide 8.41% in the fiscal third quarter. The investment bank sees a 0.36% decline in its third-quarter revenue. The American multinational's CET1 ratio jumps to 13.0% in the 3rd quarter. Bank of New York Mellon (NYSE: BK) published its earnings report for the fiscal third quarter on Friday that topped analysts’ estimates for earnings and revenue. Its financial report came a day after peer, Morgan Stanley, said its net income climbed to £2.11 billion in Q3. BNY Mellon was reported 1.1% down in premarket trading on Friday. On a year to date basis, shares of the company are now close to 25% down. BNY Mellon had recorded an annual growth of 8% in the stock market last year. Here’s what you need to know about the different types of stock investments. Are you looking for fast-news, hot-tips and market analysis? Sign-up for the Invezz newsletter, today. BNY Mellon’s Q3 financial results versus analysts’ estimates Experts had forecast BNY Mellon to print £2.97 billion of revenue in the third quarter. Their estimate for earnings per share was capped at 73 pence per share. In its report on Friday, the investment bank topped both estimates posting a slightly higher £2.98 billion of revenue and 76 pence of earnings per share in Q3. On a year over year basis, BNY Mellon noted a 0.36% decline in its third-quarter revenue and an 8.41% decline in per-share earnings. The American multinational refrained from giving future guidance on Friday. Other prominent figures in BNY Mellon’s financial results include a 1% annualised decline in fee revenue and a broader 4% decline in net interest revenue. At £2.09 billion, its total noninterest expense came in 4% higher than last year. The U.S. investment bank reported a 4% year over year decline in revenue from investment services that was partly offset by a 3% growth in its investment and wealth management segment in the third quarter. BNY Mellon’s CET1 ratio jumps to 13.0% in the third quarter BNY Mellon valued its provisions to cover for bad loans at £6.98 million. Its common equity tier 1 (CET1) ratio jumped 40 base points in the third quarter to 13.0%. CEO Todd Gibbons commented on the financial update on Friday and said: “Our third-quarter results reflect the resilience of our business model despite the significant impact of lower rates and associated money market fee waivers, as we reported. Our operating margin was 30% as we controlled costs, and our return on tangible common equity was solid at 17%.” BNY Mellon declared 24 pence per share of dividend on Friday. At the time of writing, the investment bank is valued at £25.56 billion and has a price to earnings ratio of 8.03.
Economy

Investors Diurnal Team - October 21, 2020 0
Months before the Justice Department filed a landmark antitrust suit against Google this week, the internet company’s adversaries hustled behind the scenes to lay the groundwork for a case.Nonprofits critical of corporate power warned lawmakers that Google illegally boxed out rivals. With mounds of documents, economists and antitrust scholars detailed to regulators and state investigators how the company throttled competition. And former Silicon Valley insiders steered congressional investigators with firsthand evidence of industry wrongdoing.An unlikely collection of lawyers, activists, economists, academics and former corporate insiders are now fueling the backlash against the world’s largest technology companies. Bolstered by millions of dollars from high-profile sponsors like the financier George Soros and the Facebook co-founder Chris Hughes, they have coalesced to become a new class of professional tech skeptic.To rein in Google, Apple, Facebook and Amazon, the tech opponents have employed a wide set of tactics. They have lobbied regulators and lawmakers about anticompetitive business practices, filed legal complaints about privacy violations, organized boycotts and exposed the risks of disinformation and artificial intelligence.Their potency was cemented on Tuesday when the Justice Department filed its suit accusing Google of maintaining an illegal monopoly over internet search and search advertising. After years of making
Economy

How to Avoid Paying the Cruelest Tax: Inflation