A new army of social media-enabled day traders is helping push stocks to records and turning companies into market sensations.

As trading by individual investors boomed during the coronavirus pandemic, so has the popularity of online communities where they gather. Platforms including TikTok,
Twitter,
YouTube, Reddit, Instagram,
Facebook
and messaging platform Discord have become the new Wall Street trading desks. Individual investors gather to talk about hot stocks like
Tesla Inc.,
boast of gains and commiserate about losses.

These investors do more than just talk, though. They piggyback on each others’ ideas and trades, helping fuel the momentum that has propelled some companies to triple-digit or bigger gains in 2020.

“People fall in love with [some stocks] and they get in these echo chambers, where they are all shouting, like, ‘We’re going to buy Tesla forever!’” said Blake Bassett, a 31-year-old delivery driver who began trading several years ago. “People post all day like it’s a football game.”

And while online discussions among investors aren’t necessarily new—in the late 1990s internet chat rooms dedicated to stocks helped sustain the tech-stock bubble—social media is more widespread than ever before. That, meanwhile, has coincided with an industrywide move to commission-free trading, while most brokerages have made it easier to dabble in risky instruments like options.

Shares of Chinese electric-vehicle maker
NIO Inc.
are an example. The stock has received some of the most enduring interest from individual investors, joining the ranks of dozens of others, including fuel-cell company
Plug Power Inc.
and Tesla.

Though hardly a household name, NIO is among the most searched stocks on Google. Video snippets under the tag #nio have accumulated more than 35 million views on the social-media platform TikTok, with many young investors encouraging others to buy shares of the company or questioning if it is the next Tesla. And the buzz is alive on Twitter, where it was mentioned nearly 6,800 times on a single day in November, up from about 100 mentions a day at the start of 2020.

The excitement online has coincided with a rush of trading activity. NIO has been the second-most actively traded stock in the U.S. market over the past year, with about 111 million shares changing hands on average each day, according to Dow Jones Market Data as of Thursday. That only trailed trading in
Apple Inc.,
which has a market valuation more than 20 times that of NIO.

NIO has been a more popular trade than even the SPDR S&P 500 Exchange-Traded Fund Trust, one of the biggest ETFs tracking the broad stock-market index. Options volume tied to NIO has surged, with more than one-tenth of all activity recently stemming from individual investors, according to Trade Alert data.

Fetching under $4 at the beginning of 2020, NIO’s U.S.-traded American depositary receipts closed at $62.70 Monday, a record. Its market value of about $98 billion is well above that of
General Motors Co.

The chatter has persisted into the new year. NIO was the second-most-traded stock Monday on the retail-trading platform operated by Fidelity Investments Inc., trailing only Tesla. And the trend was mirrored on Webull Financial LLC’s platform last week. Part of the excitement stemmed from the unexpected Democratic Senate wins in Georgia, which some investors believe will give President-elect
Joe Biden

a greater shot at achieving his clean-energy initiatives.

The company’s annual “NIO Day” on Saturday, during which the electric-vehicle maker unveiled its fourth production model, had also prompted enthusiasm among individual investors leading up to the event.

The online buzz has enticed traders to pile in. Gavin Mayo, a 19-year-old student at the University of North Carolina at Chapel Hill, says he typically spends anywhere from one to five hours a day scrolling TikTok, YouTube and other platforms for ideas on what to trade while churning out video snippets to more than 60,000 of his TikTok followers. 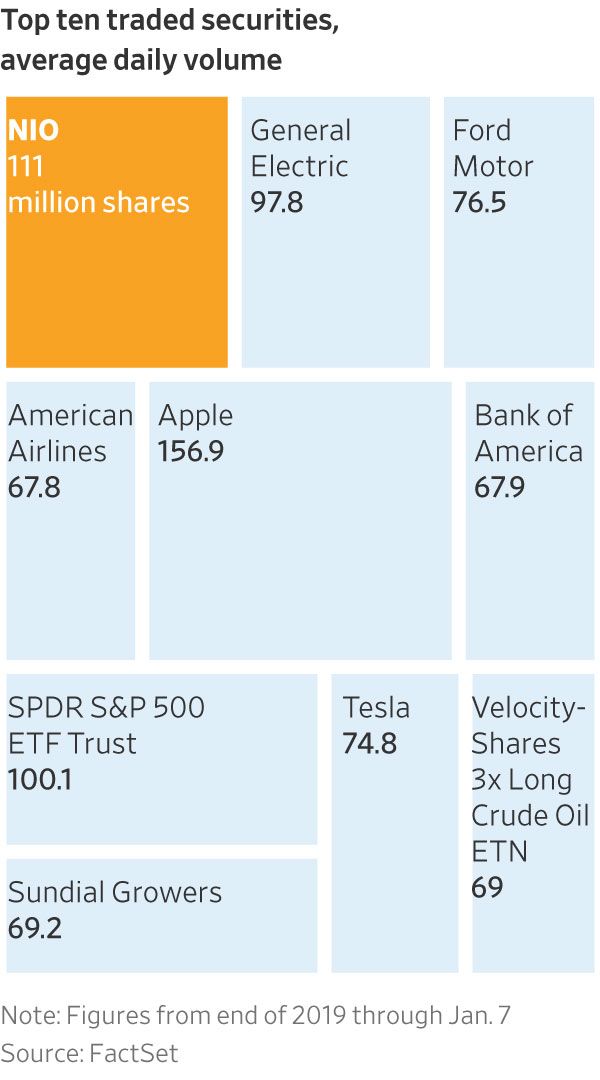 “If there’s some really good stocks out there—usually people are talking about it,” said Mr. Mayo, adding that he recently sold 100 shares of NIO for about a $1,600 profit after they rallied more quickly than he expected. Now, he’s staying away from shares of electric-vehicle makers because he thinks they have run up too far. He recently sold his position in Tesla, too. That stock has surged 748% in the past 12 months, a rally that has intensified over the past week, making the company worth more than Facebook Inc.

Social media is what drew Mr. Mayo to stocks in the first place at around age 13, when he says he saw millionaire penny-stock trader Timothy Sykes’s account while browsing Instagram. Mr. Sykes has boasted of making a full-time job out of trading stocks and posted about the $35,000 gold Rolex watch he had bought.

Not everyone is swept up by the hype, even if they, too, are part of the social-media stock-market debate.

Mr. Bassett has become skeptical of NIO’s recent share-price moves. In early December, he turned to a popular stock-trading group on Facebook: “Do people even look into stocks anymore?” he asked the group’s more than 150,000 members. “NIO is outright overvalued.”

Dozens of comments flooded in. One trader said he had taken his profits and run. Another member of the Facebook group suggested NIO will “take over” the electric-car industry. A third offered a much simpler explanation: Never mind technicals, the member said, “We’re in a bull run until we’re not.”

Do you think these young investors can beat Wall Street “pros” at investing? Why or why not? Join the conversation below.

Determining the degree to which online chatter drives share-price movement can be difficult to quantify. But some researchers have found individual investors typically make the biggest impact on smaller, more speculative stocks. Based on an analysis that he conducted in August of Robinhood Markets Inc. customers,

Though few expect this year to see as much market volatility as 2020, online interest in investing has only grown. As of January, posts tied to #stockmarket had garnered over 800 million views on TikTok, more than triple the figure in June. Reddit’s infamous WallStreetBets forum has more than doubled in subscribers since the start of 2020. StockTwits, a social network focused on investing and trading, has seen its user numbers more than triple over the past year. Recently, Tesla and NIO have generated some of the most chatter.

TikTok is becoming a popular forum for Gen-Z and Millennials to learn about entrepreneurship and making money. To find out more, WSJ spoke with three TikTokers who are attracting large audiences that support their thriving online businesses.

Some new investors are drawn by the camaraderie that the platforms offer. Georgina Allen, who is 26, waded into stock and options trading after two of her friends convinced her to join a Discord server dedicated to trading. While she was furloughed from her job during the pandemic, the federal government worker turned her attention to markets.

She often followed a routine: She would wake up at 6 a.m., assess premarket stock moves and look over her option positions. When markets opened, she would jump on a Zoom call with other members of her Discord group.

“We actually would join like a Zoom call, and we would live-trade together. And that was pretty much my life,” said Ms. Allen, who is now back at work.

Members of the channel would discuss articles or the conversation among CNBC pundits and delve into company balance sheets. Like many other young investors, Ms. Allen bought shares of NIO after reading about the company online. Impressed by its financials—and keen not to miss out on gains she saw others reap—she bought the shares at about $14 apiece, she said. They are now 348% higher.

“Just seeing other people’s success, normal people like me, and not like institutional traders, was really motivating,” Ms. Allen said.

Some industry veterans warn social-media posts can inadvertently send too rosy a message about beginner trading. That can draw other newbies in.

“Everybody only posts the wins,” said Anthony Denier, chief executive of Webull, a brokerage that is popular with younger investors. “Nobody sends a selfie on Instagram when they just woke up after a bender. It’s when they’re having their first cocktail for the night and they’re all done up. It’s the same for day traders” posting their profits and losses.

—Caitlin Ostroff contributed to this article.

The Week Ahead In Biotech: FDA To Issue Decisions On Merck And Aurinia Drug...

The year of divergence

Ashmore reports a 9% growth in assets under management

Most Americans Are Expected to Save, Not Spend, Their $600 Check

Investors Diurnal Team - December 30, 2020 0
#masthead-section-label, #masthead-bar-one { display: none }The Coronavirus OutbreakliveLatest UpdatesMaps and CasesThe Stimulus PlanVaccine InformationF.A.Q.TimelineAdvertisementContinue reading the main storySupported byContinue reading the main storyMost Americans Are Expected to Save, Not Spend, Their $600 CheckWhile lawmakers debate increasing the stimulus payments to $2,000, experts say it would make far more sense to give more money to the unemployed.Galen Gilbert, a 71-year old lawyer who lives in a Boston suburb, plans to deposit his stimulus check into savings. “I’m not really suffering financially,” he said.Credit...Katherine Taylor for The New York TimesNelson D. Schwartz and Dec. 30, 2020, 3:48 p.m. ETGalen Gilbert knows just what he will do with the check he gets from Washington as part of the pandemic relief package, whatever the amount: put it in
Economy

Companies Seek to Green the Grid With Trash Gas