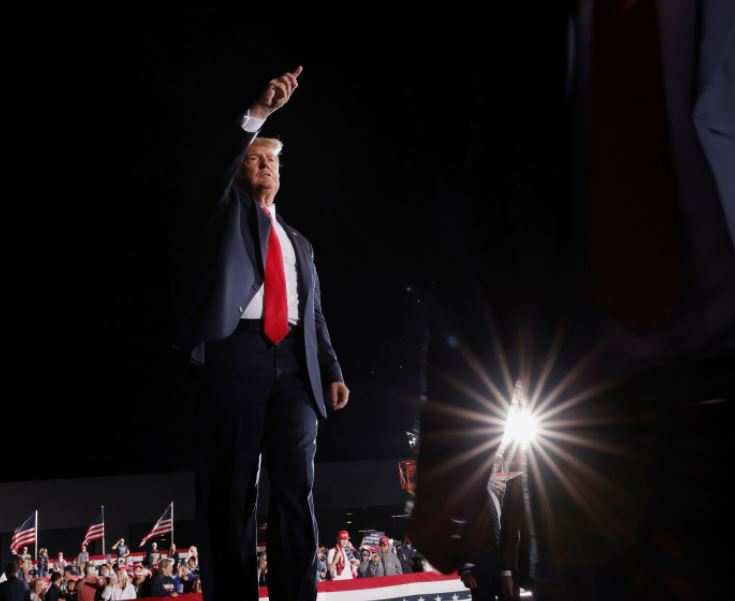 “President Trump has delivered what he promised in 2016. He is the best president in my life-time,” Mark, who along with his two young sons drove for two-and-a-half hours to listen to Trump in person, told PTI.

Investors Diurnal Team - October 21, 2020 0
WASHINGTON: Looking to undermine rival Joe Biden two weeks before the election, President Donald Trump's campaign has seized on a tabloid story offering bizarre twists to a familiar line of attack: Biden's relationship with Ukraine.But the story in the New York Post raised more questions than answers, including about the authenticity of an email at the center of the story.The origins of the story also trace back to Trump lawyer Rudy Giuliani, who has repeatedly pushed unfounded claims about Biden and his son, Hunter Biden.Even if the emails in the Post are legitimate, they don't validate Trump and Giuliani's claims that Biden's actions were influenced by his son's business dealings in Ukraine.A look at the development:HOW DID BIDEN'S SON BECOME A CAMPAIGN ISSUE?Hunter Biden joined the board of the Ukrainian gas company Burisma in 2014, around the time his father, then U.S. vice president, was helping conduct the Obama administration's foreign policy with Ukraine.Senate Republicans said in a recent report that the appointment may have posed a conflict of interest, but they did not present evidence that the hiring influenced U.S. policies.Trump and his supporters, meanwhile, have advanced a widely discredited theory that Biden pushed for the firing of Ukraine's
World News

Investors Diurnal Team - October 20, 2020 0
MOSCOW: Russia on Tuesday said it was ready to offer the United States a mutual one-year freeze on the number of nuclear warheads held by both countries in order to extend a landmark arms reduction deal due to expire next year."Russia offers extending the New START by one year and is ready to take on a political commitment with the United States to freeze the number of nuclear warheads both sides have for this period," the foreign ministry said in a statement.Russian President Vladimir Putin last week proposed extending by one year the New START treaty, which is due to expire in February 2021. The White House described the proposal as a "non-starter" unless accompanied by a freeze on the number of nuclear warheads.
World News

Investors Diurnal Team - October 17, 2020 0
PARIS (AFP, BLOOMBERG) - Millions of Europeans faced tough new Covid-19 restrictions on Saturday (Oct 17) as governments try to combat spiralling infections. Paris and other French cities are under a nighttime curfew that will last for at least a month, while England is banning mixed household gatherings in the capital and other areas. Italy, meanwhile, is contemplating imposing the tightest rules on non-essential activities since its national lockdown half a year ago. In France, about 20 million people in Paris and several other French cities were facing the start of a 9pm-6am curfew after the country on Thursday saw a new high of 30,000 cases in 24 hours. The move - which will last at least a month - has broad public support, but officials are fretting over the heavy social and economic costs it will bring. "It's terrible. It feels to me like being back in March," said Mr Hocine Saal, head of the emergency service at the hospital in the Paris suburb of Montreuil, adding that rising numbers of non-coronavirus patients made coping "really difficult". In Britain, which has Europe's highest death toll at more than 43,000, restrictions are being ramped up