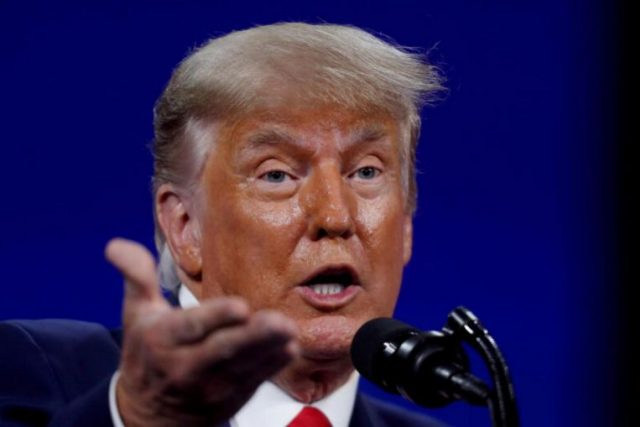 “Kim Jong-un of North Korea, who I have gotten to know (and like) under the most trying of circumstances, never respected the current President of South Korea, Moon Jae-in,” Mr Trump said in a statement.

“President Moon was weak as a leader and as a negotiator, except when it came to the continued, long term military rip-off of the USA… We were treated like fools for decades, however, I got them to pay billions of dollars more for the military protection and services we render.”

“The Biden Administration is not even going to ask for the additional billions South Korea agreed to pay us,” Mr Trump added, referring to current President Joe Biden.

During his presidency, Mr Trump positioned himself as a lead negotiator in peace talks on the Korean peninsula.

He first met in June 2018 with Mr Kim in Singapore, the first-ever summit between the countries still technically at war, and later said the two leaders “fell in love”.

The pair met twice more during Trump’s time in office, and North Korea held off on nuclear and missile tests – but analysts say Pyongyang has kept advancing its weapons programs.

In March, South Korea agreed to pay 13.9 per cent more towards the cost of the US troop presence on the peninsula, in a six-year deal resolving an issue that festered under the Trump administration.

Washington stations around 28,500 troops in South Korea to defend it from the nuclear-armed North Korea, as well as to protect US interests in northeast Asia.

Under the new deal, Seoul has agreed to pay 1.18 trillion won (S$1.4 billion) for 2021, with annual increases thereafter linked to its defence budget.

The sum represents a 13.9 per cent increase on the roughly US$920 million Seoul was paying under the previous agreement, which expired in 2019 – but is a far cry from the Trump administration’s initial demand of US$5 billion a year.

Veterans and Military Spouses Have Access to Free Tech Training Through a New Career...

Action Will Be Taken Against Who Involved in Pulianthope Building Scam

Investors Diurnal Team - September 25, 2020 0
JERUSALEM (AFP) - Israel toughened its coronavirus measures on Thursday (Sept 24) as a second nationwide lockdown failed to bring down the world's highest infection rate a week after it was imposed. The new rules will close the vast majority of workplaces, shutter markets and further limit prayers and demonstrations. "Over the past two days, we've heard from experts that if we don't take immediate and harsh measures, we'll reach an abyss," Prime Minister Benjamin Netanyahu said late Wednesday, at the start of a cabinet meeting to thrash out the new measures. The government's latest move comes as Israel is poised to enter the second week of a three-week lockdown imposed last Friday, which included the closure of schools and restrictions on work and leisure. Under the new measures set to be approved in parliament later Thursday, synagogues will only be allowed to open on Yom Kippur, a Jewish holiday that begins Sunday afternoon. At other times, only outdoor prayer with a maximum of 20 people in attendance will be allowed. The same restrictions have been applied to demonstrations. "To save the lives of Israel's citizens, we need to impose
World News

Investors Diurnal Team - April 18, 2021 0
MOSCOW: Allies of jailed Kremlin critic Alexei Navalny said on Sunday they planned to stage what they have predicted would be the largest street protests in modern Russian history on April 21 to draw attention to Navalny's deteriorating health. Navalny, a prominent opponent of Russian President Vladimir Putin, started refusing food on March 31 in protest at what he said was the refusal of prison authorities to provide him with proper medical care for acute leg and back pain.