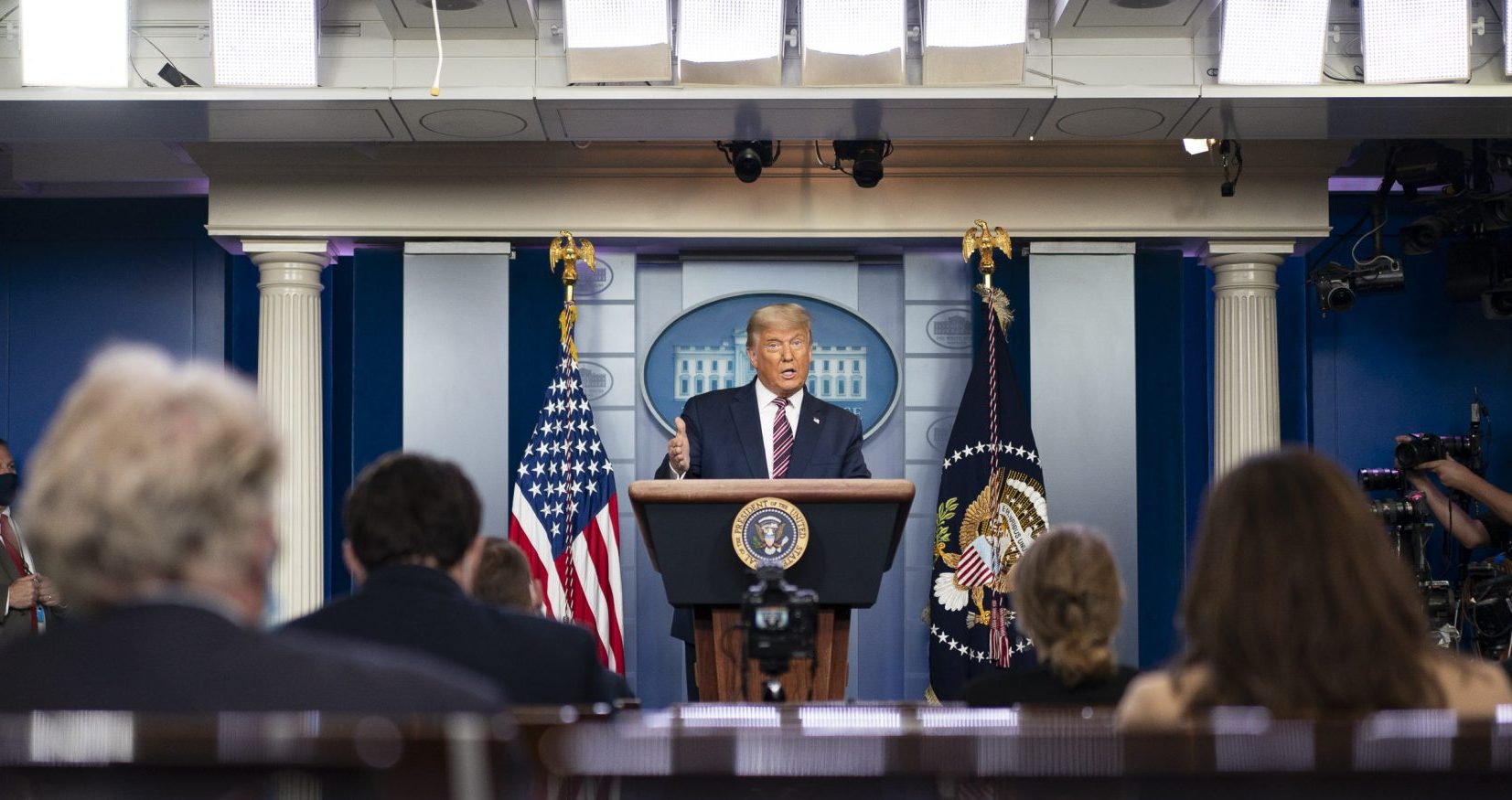 Let’s face it: Joe Biden might be the next president of the United States.

A man who rarely left his basement for weeks and repeatedly refused to take questions from the press, outside of the flavor of ice cream he purchased, could soon lead the free world.

It’s tough to stomach, but when one considers that he won by claiming that Donald Trump failed to protect the country from COVID-19 it becomes downright infuriating.

Says the guy who massacred the response to the 2009 swine flu.

Biden knew well his allies in the mainstream media would cover for his inaccurate and absurd accusations, as they crafted the very narrative he rode to the nomination and, possibly, to 1600 Pennsylvania Avenue.

But an honest and fair evaluation of the president’s struggle with the once-in-a-century pandemic reveals that he did indeed succeed “in his most basic duty to the nation.” Trump’s balancing of the country’s physical and economic health will likely be heralded as one of the greatest achievements of his storied presidency.

The press relishes the opportunity to tout America’s COVID death count, but back in March White House Coronavirus Response Coordinator Dr. Deborah Birx predicted that 200,000 total deaths would be a rosy outcome; in fact, she said, that’s “if we do things almost perfectly.”

As of this writing COVID-19 has claimed approximately 250,000 American lives, and with cases and hospitalizations hitting record highs in some parts of the country more are sadly inevitable. But our mortality rate is rapidly declining, meaning by the time a vaccine is introduced we will fall well short of the worst-case scenario of more than two million.

While Trump’s response wasn’t (by Dr. Birx’s metrics) perfect, it was pretty damn close. And it would have been much closer were it not for the gross incompetence of the president’s Democrat detractors.

Recall, if you will, New York Gov. Andrew Cuomo’s policy of placing COVID patients in nursing homes, a move that resulted in horrific fatality counts for the state. And the promotion of Chinatown’s Lunar New Year celebration by New York City’s health commissioner because, as she put it, not attending would be racist.

And why is that? Because Trump had blocked travel from China a few days prior.

Such politically motivated actions on the part of Democrats were instrumental in spreading COVID-19 throughout the country. Per the New York Times:

But despite being victims, the red states were demonized by the media, as if their politics necessitated their scapegoating. Yet it was Trump country that would save many, many lives by insisting its economies remain open.

We now know that shutdowns can lead to all sorts of social ills. In fact, a study from earlier this year predicted that up to 75,000 people could perish due to lockdown-driven addiction and suicide. While the U.S. definitely took some economic hits — trillions of dollars of debt and record unemployment, for instance — the bones of the economy remained intact, positioning the country to possibly outdo its pre-COVID gains and leave the rest of the world, once again, in its dust.

Consider that the U.S. recorded 33.1 percent growth from July to September, setting the record for the strongest quarter in American history and nearly doubling the previous record, set in 1950. Not only that, but jobless claims in late October fell to their lowest number since March.

It’s now clear that keeping the nation’s economic engine running, if only at half speed, was critical to the current recovery and, more importantly, the prevention of thousands of unnecessary deaths due to isolation and economic decline. It is nearly impossible to calculate the emotional toll that extended lockdowns take on our pocketbooks and psyches, but it is both science and common sense that interaction and opportunity are critical to individual and societal health.

After all, the draconian measures proposed by Biden’s advisers have proven counterproductive. One need only look to Europe, where a massive resurgence of the virus is rocking the continent despite disastrous economic disruption, to realize that Trump’s strategy will emerge as the correct one.

Cemented by the fact that America is very likely to soon have two approved coronavirus vaccines.

Both Pfizer and Moderna claim promising candidates, and both benefited from Operation Warp Speed, the administration’s plan to expedite and distribute a COVID-19 vaccine. The former accepted logistical funding, and the latter received nearly $1 billion for research and development and an additional $1.5 billion to allow the federal government to purchase and distribute the vaccine once approved.

Trump, it seems, saved the best for last.

The success of Operation Warp Speed is such that CNN’s Jake Tapper and Sanjay Gupta were forced to give the president credit for his ability to reduce bureaucracy and expedite innovation. After the election, strangely.

But no matter who is president come January, one thing is clear: Donald Trump’s threading of the scientific and economic needles will enable America to lead the global charge to defeat this virus.

The credit isn’t all Trump’s, obviously. His decision to appoint Mike Pence to lead his Coronavirus Task Force, and the logic of countless advisers, governors, and mayors, were all instrumental in what was, and still is, a monumental effort.

But if “the buck stops here,” as they say, then Trump deserves a great deal of credit.

The media will die before they grant it to him, of course, but we can all take solace in the fact that many more Americans did not.

Pfizer, Gilead, Ross: What to Watch When the Stock Market Opens Today

Biden’s Response to the Iran Threat Could Be Disastrous

Investors Diurnal Team - November 21, 2020 0
While foreign policy is likely to take a back seat to domestic concerns such as the coronavirus pandemic during the early stages of a future Biden administration, one issue should not: the Iran threat. During the campaign, President-elect Joe Biden promised to handle Iran “the smart way” and said he would give Tehran “a credible path back to diplomacy.” He also said the U.S. could rejoin the 2015 Iranian nuclear deal “as a starting point for follow-on negotiations” if Iran commits to full compliance. But top U.S. allies in the Middle East such as Israel and the Gulf states are especially concerned that Biden would return to the same failed strategy on Iran that former President Barack Obama pursued as part of the nuclear deal. Chief among these concerns is that the Islamic Republic could see significant sanctions relief in return for compliance with the nuclear accord. This would give a financially struggling Iran the funds it would need to continue its regional aggression, develop its ballistic missile program, and prepare to ramp up its nuclear program once restrictions from the 2015 deal come to an end. Yet it is clear that Iran has ended any pretense of adhering to
World News

Investors Diurnal Team - November 20, 2020 0
JERUSALEM: US secretary of state Mike Pompeo wrapped up a trip to Israel on Friday with a visit to a museum in Jerusalem that honors Christian Zionists and was founded by a prominent evangelical adviser to the Trump administration.The museum visit came a day after Pompeo became the first secretary of state to visit an Israeli settlement in the occupied West Bank. He also announced a new policy allowing settlement products exported to the US to be labeled "made in Israel" and a new initiative to combat the Palestinian-led international boycott movement.Christian Zionism is a belief by some Christians that the return of the Jews to the Holy Land and the establishment of the state of Israel in 1948 were in accordance with biblical prophecy.The Friends of Zion Museum was founded by Mike Evans, a prominent evangelical supporter of Israel. Evangelical Christians are among President Donald Trump's most loyal supporters and have hailed his unprecedented support for Israel. They would also be an important constituency should Pompeo pursue elected office following Trump's presidency.Pompeo did not deliver any public remarks at the museum and departed Israel midday.The Trump administration has broken with decades of US policy to support Israel's claims to