The blacklist sparked a selloff in stocks and bonds issued by some targeted companies or their units, though analysts said it wasn’t clear if the prohibition extended to publicly traded subsidiaries as well as to companies named directly by U.S. authorities. Adding to the uncertainty, the ban is due to start on Jan. 11, just days before President-elect Joe Biden is due to take office.

Late last week, MSCI said it was consulting investors on the impact of the ban, including whether it needed to change existing stock indexes or introduce new ones.

The index provider said it was “seeking rapid feedback from clients and other stakeholders on the scope of the sanctions and the timing of the deletion of the affected securities from FTSE Russell indexes.” FTSE Russell said it had asked the Treasury Department’s Office of Foreign Assets Control to define the scope of these sanctions. It plans to reach a decision by Dec. 4.

The overall impact on benchmarks is likely to be modest. Of the 10 biggest stocks in the MSCI China Index,
China Mobile
is the only one that would be affected by the ban. It has a market value of $124 billion, with stock listed in Hong Kong and New York, and makes up about 1.3% of the MSCI China index.

The order also has implications for corporate bond markets. Kenneth Ho, head of Asia credit strategy for
Goldman Sachs,
estimates that targeted companies and their subsidiaries have about $53.9 billion in offshore debt, or about 6% of all Chinese bonds issued in dollars, euros or yen. 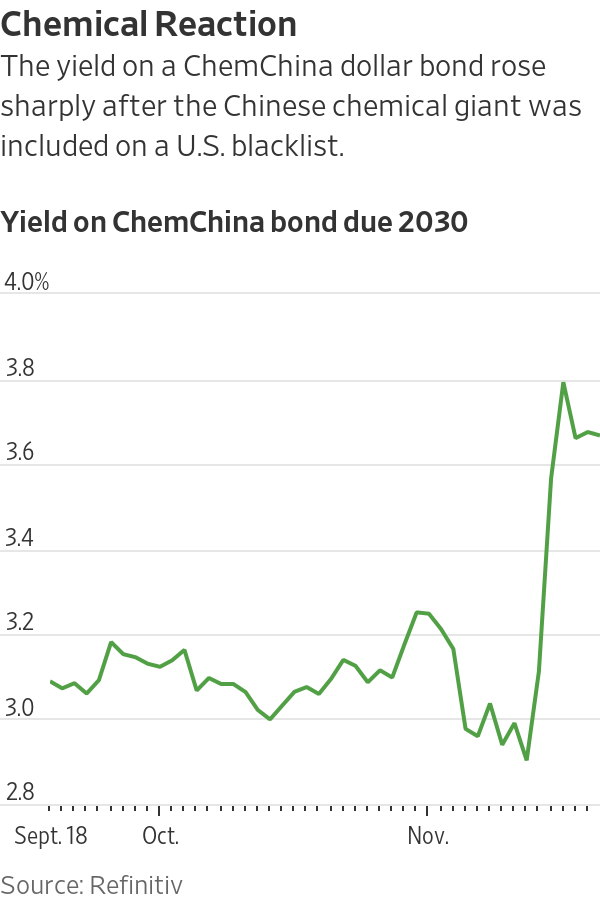 FTSE Russell said it was also reviewing the order’s impact on its bond indexes. JPMorgan, another major bond-index provider, said it wouldn’t include new bonds issued by any of these companies in its benchmarks.

The bank will keep existing bonds in its indexes, but said it will “re-evaluate once there is more clarity on the impact to benchmark replication,” according to a JPMorgan note published last week. The note said 16 targets or their subsidiaries had issued bonds that were included in its indexes, and they make up 3.7% of the JPMorgan Asia Credit Index, which has about $80 billion in assets benchmarked against it.

Prices of bonds issued by some of these companies, including China National Chemical Corp., have fallen since the order. The company, often known as ChemChina, has borrowed heavily in international markets in recent years after spending $43 billion to acquire Switzerland’s Syngenta AG.

Owen Gallimore, head of credit strategy at ANZ, said most international buyers of such Chinese dollar bonds were passive investors, with their holdings closely tracking a benchmark index. That meant bonds that were cut off from indexes have a meaningfully larger spread, or yield premium, versus comparable government debt, he said.

Write to Frances Yoon at frances.yoon@wsj.com

Shopify Could Own Black Friday

A Young Beauty in China Could Turn Investors' Heads

TV Insiders are speculating about the future of CBS News boss Susan Zirinsky, one...