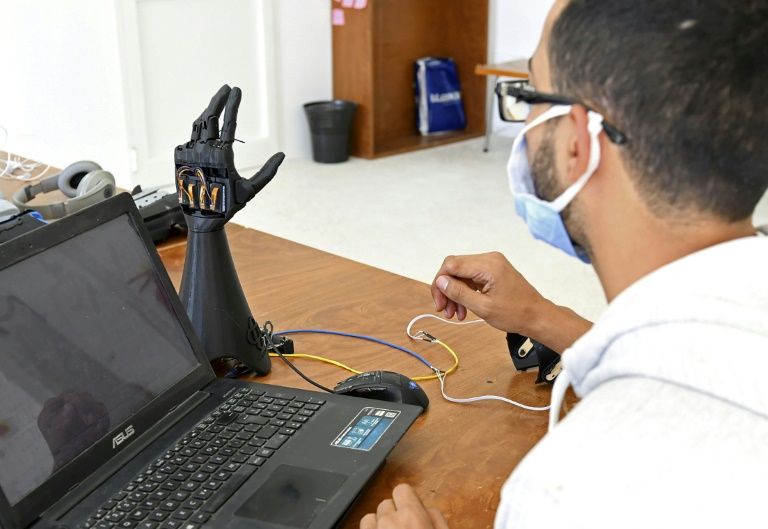 Tunisian startup Cure Bionics are developing a prototype of an artificial hand, which they hope will be more affordable to help amputees and other disabled people.

SOUSSE, Tunisia: A Tunisian startup is developing a 3D-printed bionic hand, hoping the affordable and solar-powered prosthetic will help amputees and other disabled people across Africa.

Unlike traditional devices, the artificial hand can be customised for children and youths, who otherwise require an expensive series of resized models as they grow up.

The company Cure Bionics also has plans to develop a video game-like virtual reality system that helps youngsters learn how to use the artificial hand through physical therapy.

Mohamed Dhaouafi, the 28-year-old founder and CEO of Cure Bionics, designed his first prototype while still an engineering student in his home city Sousse.

“One team member had a cousin who was born without a hand and whose parents couldn’t afford a prosthesis, especially as she was still growing up,” he said.

“So we decided to design a hand.”

Dhaouafi launched his start-up in 2017 from his parents’ home, at a time when many of his classmates chose to move abroad seeking higher salaries and international experience.

“It was like positive revenge,” he told AFP. “I wanted to prove I could do it. I also want to leave a legacy, to change people’s lives.”

Dhaouafi pointed to hurdles in Tunisia, where it can be hard or impossible to order parts via large online sales sites. There is a lack of funding and, he said, “we lack visionaries within the state”.

But by pooling money raised through sponsored competitions and seed investment from a US company, he was able to recruit four young engineers.

They are now fine-tuning designs, writing code and testing the artificial hand.

The device works with sensors attached to the arm that detect muscle movement, and AI-assisted software that interprets them to transmit instructions to the digits.

The hand itself has a wrist that can turn sideways, a mechanical thumb and fingers that bend at the joints in response to the electronic impulses.

To teach youngsters how to use them, Cure has been working on a virtual-reality headset that “gamifies” the physical therapy process.

“Currently, for rehabilitation, children are asked to pretend to open a jar, for example, with the hand they no longer have,” said Dhaouafi.

“It takes time to succeed in activating the muscles this way. It’s not intuitive, and it’s very boring.”

In Cure’s version, the engineer said: “We get them to climb up buildings like Spiderman, with a game score to motivate them, and the doctor can follow up online from a distance”.

3D printing meanwhile makes it possible to personalise the prosthesis like a fashion accessory or “a superhero’s outfit”, said Dhaouafi.

Cure hopes to market its first bionic hands within a few months, first in Tunisia and then elsewhere in Africa, where more than three-quarters of people in need have no access to them, according to the World Health Organization.

“The aim is to be accessible financially but also geographically,” said Dhaouafi.

The envisaged price of around $2,000 to $3,000 is substantial, but a fraction of the cost of bionic prostheses currently imported from Europe.

Cure also aims to manufacture as close as possible to the end users, with local technicians measuring the patients and then printing individually fitted devices.

“An imported prosthesis today means weeks or even months of waiting when you buy it, and again with each repair,” the inventor said.

The bionic hand is made of Lego-like parts that can be replaced if damaged or to match a child’s physical growth.

It can also be solar-powered via a photovoltaic charger for use in regions without a reliable electricity supply.

The 3D printing of rudimentary prostheses started about a decade ago and is becoming standard.

“3D printing is still in its early stages,” he said, “but it is a major game changer in the field of prosthetics and orthotics.”

“Developing countries will probably leapfrog to these technologies because the cost is much lower.”

Investors Diurnal Team - November 25, 2020 0
Dell Technologies’ net income climbs to £660 million in fiscal Q3. The technology giant reports £17.61 billion of revenue. Dell Technologies earned £1.52 per share on an adjusted basis. Dell Technologies Inc. (NYSE: DELL) published its earnings report for the fiscal third quarter on Tuesday that topped analysts’ estimates for earnings and revenue. Dell Technologies was reported about 0.5% down in extended trading on Tuesday. At £52.27 per share, the tech giant’s shares that you can learn to buy online here, are roughly 35% up year to date in the stock market after recovering from a low of £21.62 per share in March, when the impact of COVID-19 was at its peak. Are you looking for fast-news, hot-tips and market analysis? Sign-up for the Invezz newsletter, today. The Coronavirus pandemic has so far infected more than 13 million people in the U.S. and caused over a quarter million deaths. Dell’s Q3 financial results versus analysts’ estimates Dell said that its net income in the third quarter printed at £659.62 million that translates to 81 pence per share. In the same quarter last year, its net income was capped at a much lower £413.29 million, or 49.42 pence per
Tech

Investors Diurnal Team - November 9, 2020 0
Control of smart home devices can be done by fingertip. Smart home devices are projected to have Thai market penetration of 10.2% by 2025. Enthusiasm for smart homes has penetrated the property sector the past few years, though it's mainly focused on high-end real estate because the prices of connected home appliances remain high. But the adoption of smart home technology is expected to escalate in the coming years, with the prices of smart devices set to decline as more products enter the market, supported by an increase in available languages. New use cases aligned with modern lifestyles are anticipated to help push the adoption of intelligent devices at home. GATHERING MOMENTUM Niti Mekmok, vice-president of the Thai IoT Association, said smart home features have been available in Thailand for at least three years, but most connected devices are found in luxury houses and condos, particularly in the
Tech

Let's get it straight

Investors Diurnal Team - November 10, 2020 0
Let's get it straight Dyson Corrale hair straightener is such a handy way to style your hair cordlessly As a man who has very straight and short hair, this is not a product for me. So, I got my wife and two daughters to use this Dyson Corrale cord-free hair straightener instead and it did not disappoint them. After extensive use of around two weeks, my test subjects found this beauty gadget easily straightened their hair without making it dry, while keeping it glossy. The Corrale can evenly straighten a large bunch of hair with its teeth-like copper heating plates that reduces damage from doing too many pulls. But it does sometimes snag if you grab too much hair at once. Professional hairdressers recommend using the least heat possible to keep hair healthy. Also, for better results and long-lasting effect, blow dry your hair first. This Dyson Corrale cord-free hair straightener has three heat levels -- 165C, 185C, 210C -- to suit various types of hair. Readying it for a hair-straightening session will take around 15 seconds, which is short enough to please impatient people. It weighs around 500g and may