U.S. government-bond yields rose Friday after signs that Democratic candidate Joe Biden is taking the lead in the presidential election.

The yield on the 10-year Treasury note traded around 0.828%, according to Tradeweb, up from 0.775% at Thursday’s close. Yields on longer-dated Treasurys also climbed. The 30-year yield traded around 1.594% during Friday’s session, compared with 1.545% Thursday.

Yields, which rise when bond prices fall, climbed after new data showed Mr. Biden pulling ahead in Pennsylvania. Though ballots are still being counted, a victory in the Keystone State would give Mr. Biden enough electoral votes to win the presidency as long as he retains the other states he is expected to win. 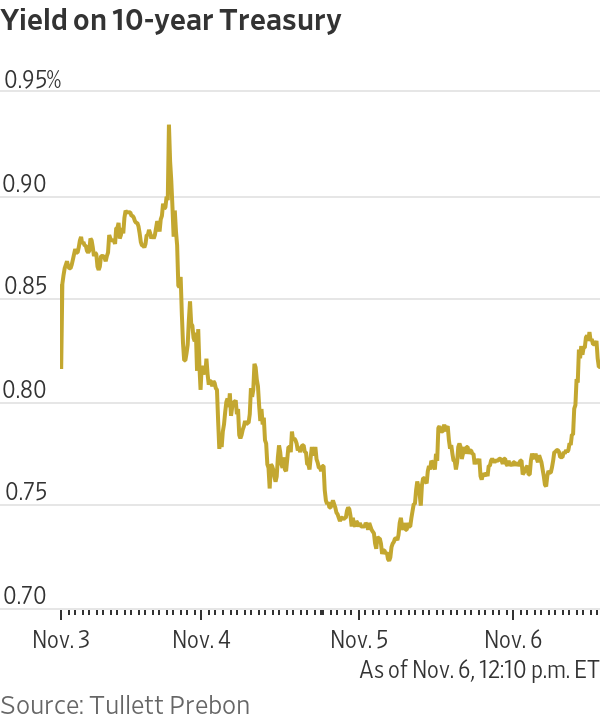 Bond investors are paying close attention to election results. The 10- and 30-year yields had climbed in the weeks leading up the election. Investors had bet on a Democratic sweep of Congress and the White House, an outcome that many said would likely lead to greater spending on pandemic relief and infrastructure projects. But the prospects for that result fell significantly on Election Day, causing a sharp drop in Treasury yields that extended into the week.

Investors and economists pay close attention to longer-term Treasury yields because they help establish borrowing costs across the economy. Treasury yields still remain above their lows from the summer, when the 10-year yield fell below 0.6%. Analysts said the pre-election rise reflected expectations that Congress would still pass a new phase of coronavirus aid, though the timing and scope of any deal is uncertain.

“There could be more room for rates to decline if it looks unlikely that we are about to get a significant Phase 4 deal in a lame duck session,” analysts at TD Securities said in a note Friday. The yield on the 10-year could retrace all the way to about 0.6%, they added, as the market begins to price in the recent rise in coronavirus cases and its impact on economic growth.

Recent economic data suggests the economy is continuing to heal amid rising infections. On Friday, the Labor Department said the U.S. added 638,000 jobs in October. That was above the forecast of economists surveyed by The Wall Street Journal, who expected an increase of about 530,000 jobs. The unemployment rate fell to 6.9%, down from its double-digit peak in April but well-above the pre-pandemic level of 3.5%.

Taken together, Friday’s developments helped remove some uncertainty from the market, said Jim Vogel, an interest rates strategist at FHN Financial. But rising coronavirus cases in the U.S. will keep bond yields range bound for the near-term.

“Until you get some clarity on the current outbreak versus the summer, it’s going to be hard for the 10-year to break past 0.88%,” he said. “There could be an economic toll from focusing on government in 2021, rather than Covid-19 in 2020.”

Waze CMO Erin Clift has had a string of coveted marketing jobs at Google...

Investors Diurnal Team - November 23, 2020 0
WASHINGTON — President-elect Joseph R. Biden Jr. is expected to nominate Janet L. Yellen, the first woman to lead the Federal Reserve, to be the next Treasury secretary, according to people familiar with the decision.If confirmed, Ms. Yellen would be the first woman to lead the Treasury in its 231-year history. She would also be at the forefront of navigating an economic crisis — while growth is recovering from pandemic-related lockdowns earlier in the year, coronavirus infections are climbing and local governments are restricting activity again, likely slowing that rebound. Ms. Yellen, 74, is likely to bring a long-held preference for government help for households that are struggling economically and for slightly tighter financial regulation with her to the Treasury. But unlike the independent Fed, Ms. Yellen would find herself in a much more political role — one that will likely require negotiating with a Republican-controlled Senate. With Mr. Biden expected to push for additional economic aid, Ms. Yellen will be thrust into trying to broker a stimulus deal in a politically divided Congress that has so far failed to agree on another round of economic aid.She may be well placed to do so, as one of the most recognizable
Economy