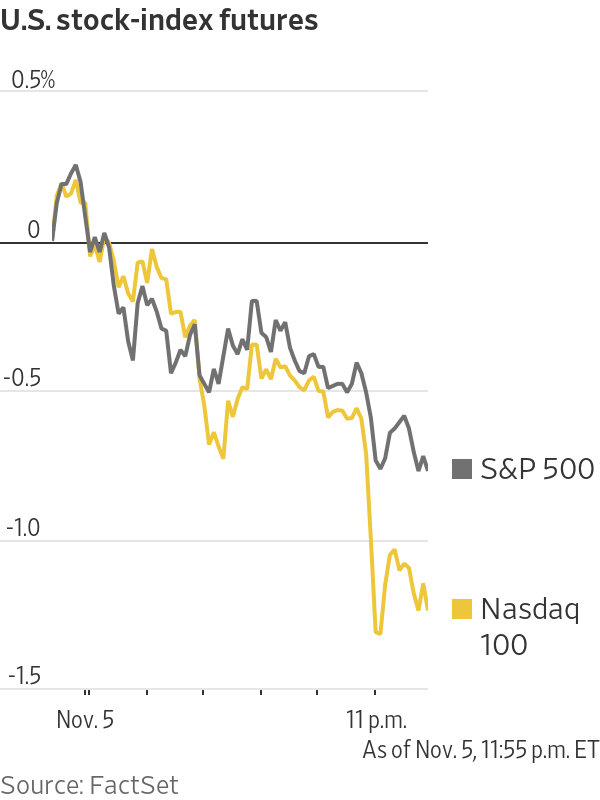 Stocks vaulted higher this week as the prospect of a split Congress reduced the chances of a corporate-tax hike should Democratic candidate Joe Biden win the presidency. Mr. Biden gained a lead over President Trump in Georgia early Friday morning and narrowed the gap in Pennsylvania. He was also leading in Arizona and Nevada, putting him within striking distance of the 270-electoral college votes needed to win the White House.

“I just think it’s a pause for breath,” said Altaf Kassam, head of investment strategy and research for Europe, the Middle East and Africa at State Street Global Advisors.

Mr. Kassam attributed this week’s rally to a “goldilocks scenario,” where a Republican Senate dilutes the power of a Democratic president, limiting his ability to enact tax increases or antitrust regulation against big tech companies. Though he expects the equity rally to continue, it won’t do so at this pace.

The relative weakness of stocks on Friday came a day after the Federal Reserve left policy unchanged, but highlighted rising risks to the economy from the coronavirus pandemic.

“There is a sense of urgency coming from the fact that the second wave, or the U.S. third wave, is becoming definitely much worse than I think we were expecting,” said Luca Paolini, chief strategist at Pictet Asset Management.

The U.S. recorded another record-high day of newly reported coronavirus infections Thursday, with nearly 121,888 infections, according to data compiled by Johns Hopkins University. The tally is 18.5% higher than Wednesday’s 102,831. More than 1,200 deaths were reported on Thursday, according to Johns Hopkins data, a figure not seen since mid-September.

Jobs numbers released at 8:30 a.m. E.T. will shed light on the pace of the U.S. economic recovery. Economists surveyed by The Wall Street Journal forecast Friday’s jobs report to show employers added 530,000 jobs in October. Economists expect the unemployment rate to edge down to 7.7% from 7.9% in September.

With so many other factors moving markets, headline jobs numbers were unlikely to have an impact, said James Athey, senior investment manager at Aberdeen Standard Investments.

“People are blissfully aware of how little relevance that number has in this environment,” Mr. Athey said.

Shares of at-home fitness company
Peloton Interactive Inc.
fell more than 6.5% premarket after the company reported higher revenue, but said high demand for its products had caused a backlog in deliveries and “unacceptably long wait times.”

Shares of
T-Mobile US Inc.
jumped 7% after the company said it continued to add customers in the third quarter, and told investors the cost-cutting plan it launched in the wake of its Sprint Corp. takeover is running ahead of schedule.

In commodities, U.S. crude oil prices dropped 3.5% to $37.45 a barrel, erasing some of the gains made earlier in the week amid hopes for longer, deeper supply cuts. Behind Friday’s fall was a combination of rising coronavirus cases—which is hampering crude’s demand recovery—and the protracted tallying of U.S. votes.

“A Biden victory is more likely to weigh on the oil price in the longer term because it makes rapprochement more probable in the Iran conflict and would see a greater focus on renewable energies,” said Eugen Weinberg, head of commodities research at Commerzbank.

The prospect of a split Senate—Sen. Kamala Harris may hold the balance of power if the Democrats win the White House—the low likelihood of the current Senate approving a stimulus deal in 2020 and the potential refusal of President Trump to accept defeat were all providing pressure, Mr. Weinberg added.

Brent crude, the international benchmark for oil, fell 2%. Gold prices crept 0.1% higher, on course to end the week up more than 3.5%.

A $433 Billion Wall Street Giant Has a Reputation Problem. It's Josh Harris's Job...

Metro Inc says its sales came in 7.4% higher in the fiscal fourth quarter

Allianz says its operating profit slipped to £2.63 billion in the...

Investors Diurnal Team - November 6, 2020 0
Allianz says its operating profit slipped to £2.63 billion in the fiscal third quarter. The German company discontinues share repurchase programme for 2020. Allianz property-casualty business took the hardest hit due to the COVID-19 crisis. Allianz SE (ETR: ALV) said on Friday that its operating in the fiscal third quarter came in slightly lower than lasts year. In an announcement last week, Allianz revealed to have entered a strategic partnership with Jubilee Holdings. Shares of the company jumped 1.5% in premarket trading on Friday. Allianz SE now has a per-share price of £151.77 per share versus a much lower £107.47 per share in March due to COVID-19 disruptions. At the start of the year, the German company that primarily deals in insurance and asset management was trading at a much higher £200 per share. Are you looking for fast-news, hot-tips and market analysis? Sign-up for the Invezz newsletter, today. Operating profit in the first nine months printed at £7.03 billion Allianz reported £2.63 billion of operating profit in the third quarter versus a higher £2.69 billion in the same quarter last year. In the first three quarters combined, the German multinational saw £7.03 billion of operating profit as
Economy