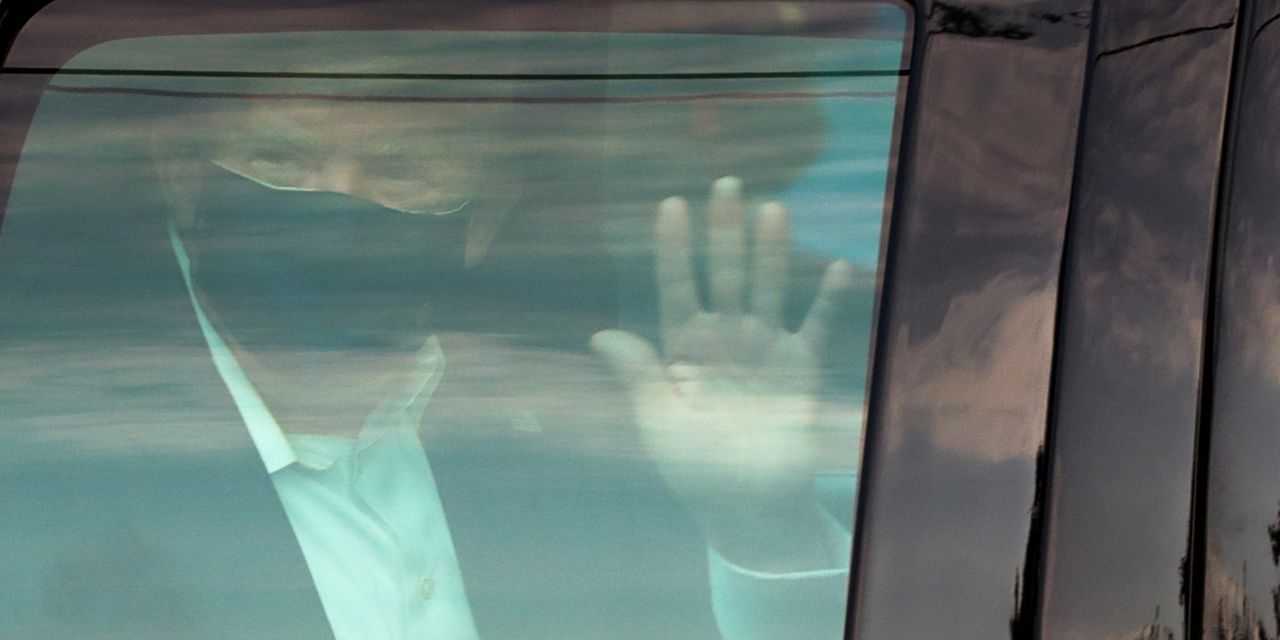 Futures tied to the S&P 500 rose 0.7%, signaling that the broad market gauge may recover some ground after the New York opening bell. Contracts linked to the Nasdaq-100 climbed 0.8%.

Uncertainty had rattled markets Friday after Mr. Trump tested positive for Covid-19, raising questions about the functioning of the government, the election campaign and the Supreme Court nomination process if the president were to be sidelined.

Equities remain sensitive to any signals about the state of Mr. Trump’s health, investors said. Doctors said the president’s condition was improving on Sunday, though they also noted that his blood oxygen level had dropped twice and that he was taking a steroid typically given to Covid-19 patients who are seriously ill. His medical team has said he could be sent back to the White House as soon as Monday, following several days of contradictory information from doctors and advisers.

The upbeat assessment has “helped risk appetite, but I would be more skeptical,” said Jane Foley, head of foreign-exchange strategy at Rabobank. “There’s been a little confusion about what doctors have said, and to-ing and fro-ing about his condition.”

Mr. Biden’s lead over the president also appears to have widened, according to a poll conducted by The Wall Street Journal and NBC News in the two days following the debate. That signals there may be less room for dispute over the results of the November elections, which would be welcomed by markets. But the views were sought before news emerged that Mr. Trump had tested positive for Covid-19.

“As people get their head around the idea that Biden is set to be president and the Democrats could sweep Congress, they’re realizing the impact on the stock market will be pretty large given a likely bigger fiscal stimulus,” said James McCormick, a strategist at NatWest Markets.

In recent weeks, markets have grown increasingly skeptical that Democrats and the White House will reach an agreement over the size and terms of the government’s next coronavirus-relief spending package. Many investors are instead trying to assess what Mr. Biden’s electoral victory might mean for the fiscal package and for issues such as corporate taxes.

“People are starting to question whether or not a Biden win would be an outright negative for equities,” Mr. McCormick said. “There are tax implications, but there are also some positive stimulus implications.”

Political uncertainty has led to choppy trading in recent days, and there are signs that the market turbulence will continue. The Cboe Volatility Index, an options-based gauge of investors’ expectations for market swings, is near its highest level in almost a month.

shares rose around 5% ahead of the opening bell in New York after the White House said Friday the president received an eight-gram dose of Regeneron’s antibody drug cocktail as a precautionary measure.

said it will buy the biotech company in a $13.1 billion deal aimed at expanding the cancer-drug powerhouse’s lineup of heart drugs.

which owns Regal Entertainment Group, plummeted more than 40% in London after the second-largest cinema chain in the U.S. said it was closing all of its locations nationwide, after reopening in August, escalating the pandemic-driven crisis facing the entertainment industry.

In commodities, Brent crude, the international energy benchmark, rose 4% to $40.85 a barrel.

The Institute for Supply Management’s survey of purchasing managers in the service sector, due out at 10 a.m. ET, is expected to show another expansion in U.S. activity last month as businesses reopened.

Write to Anna Isaac at anna.isaac@wsj.com

Tropical Storm Zeta south of Cuba to gain power as it heads north towards...

Goldman Sachs to buy Capital One Financial Corp for £1.94 billion

Investors Diurnal Team - October 7, 2020 0
Goldman Sachs to buy Capital One Financial Corp for £1.94 billion. The deal is expected to finalise in the upcoming weeks. CEO David Solomon wants to expand Goldman's footprint in consumer banking. According to the Wall Street Journal, Goldman Sachs Group Inc. (NYSE: GS) will purchase Capital One Financial Corp (NYSE: COF) for roughly £1.94 billion. The report also said that the British multinational investment bank, Barclays plc, was also interested in buying General Motors’ credit card issuer, but lost the bid against Goldman Sachs on Wednesday. Goldman Sachs was seen trading about 0.5% up in premarket trading on Wednesday. Shares of the company are now trading at £156.39 per share that translates to a little under 15% decline in 2020 so far. Goldman Sachs had plummeted to an even lower £105 per share in late March. At the time of writing, the New York-based financial services company has a market capitalisation of £53.81 billion and a price to earnings ratio of 15.30. Are you looking for fast-news, hot-tips and market analysis? Sign-up for the Invezz newsletter, today. The deal is expected to finalise in the upcoming weeks Goldman Sachs and Capital One have come to terms on the purchase price. The deal is now likely to close in the upcoming weeks. The U.S. investment bank published its earnings report for the fiscal second quarter in mid-July that came in stronger than what experts had forecast. Following the completion of the transaction, Goldman Sachs will have a new avenue to further expand its footprint in consumer banking, to offset volatility in its other segments, including trading and investment banking. Goldman’s presence in consumer banking is relatively smaller as compared to its rivals like Citigroup Inc and JPMorgan Chase. But CEO David Solomon has been increasingly focusing on strengthening the bank’s position in this segment. Goldman Sachs partnered with Apple Inc in 2019 The Capital One acquisition marks Goldman’s 2nd prominent credit card partnership. It collaborated last year with Apple Inc. over the launch of the latter’s dedicated credit card to be used with Apple Pay and Apple devices. Goldman Sachs and General Motors are yet to make an official statement on the news. Capital One remained almost flat in premarket trading on Wednesday. The American bank holding company now has a per-share price of £58.80 versus a much £32.87 per share in the first week of April. Capital One had started the year 2020 at a much higher per-share price of £80.58 in the stock market. At the time of writing, the McLean-based company that specialises in credit cards, auto loans, banking, and savings account has a market cap of £26.86 billion.
Economy

U.S. Household Wealth Rose Before the Pandemic, but Inequality Persisted

Investors Diurnal Team - September 28, 2020 0
Families were making gains in income and net worth in the three years leading up to the pandemic, according to Federal Reserve data released on Monday, but wealth inequality remained stubbornly high.Median household net worth climbed by 18 percent between 2016 and 2019, the Fed’s Survey of Consumer Finances showed, as median income increased by 5 percent. The survey, which began in 1989, is released every three years and is the gold standard in data about the financial circumstances of U.S. households. It offers the most up-to-date and comprehensive snapshot of everything from savings to stock ownership across demographic groups.The figures tell a story of improving personal finances fueled by income gains, the legacy of the longest economic expansion on record that had pushed the unemployment rate to a half-century low and bolstered wages for those earning the least. Yet despite the progress, massive gaps persisted — the share of wealth owned by the top 1 percent of households was still near a three-decade high.Nearly all of the data in the 2019 survey were collected before the onset of the coronavirus. Economists worry that progress for disadvantaged workers has probably reversed in recent months as the pandemic-related shutdowns threw millions