U.S. stock indexes headed for records Friday as this week’s revival of stimulus negotiations bolstered expectations that the economy can weather the pandemic’s continued spread.

The Dow Jones Industrial Average gained about 170 points, or 0.6%, putting it on pace for a record and its second close over 30000. The S&P 500 rose 0.6%, and the tech-heavy Nasdaq Composite added 0.4%, with both indexes also on pace for new highs. All three indexes are on course for modest weekly gains.

Investors have watched closely in recent days as momentum grows in Washington for a new coronavirus aid package. A sharp decline in job growth in November added to the sense of urgency, with members of both parties pointing to Friday’s jobs report as impetus for swift action.

“You are still looking at an economy that is in pain,” said Amy Kong, chief investment officer at Barrett Asset Management. “You want to make sure that the household income is continuing on, or the momentum is there, because I believe once household income gets to a level where it impacts confidence, it’s going to be hard to get folks to spend again.”

U.S. consumers boosted spending in October for a sixth straight month, but recent survey data suggests their views of the economic outlook dimmed in November. Consumer spending accounts for more than two-thirds of U.S. economic activity.

The November jobs report showed employers added 245,000 jobs last month, less than half the 610,000 jobs added in October and below economists’ expectations. The unemployment rate edged down to 6.7% from 6.9% in October, partly because fewer Americans were looking for work.

“The jobs report’s important,” said Tom Hainlin, national investment strategist at U.S. Bank Wealth Management. “But it just kind of confirms what we’re seeing, which is there’s only so much recovery we’re going to see until we can get the economy fully reopened.”

Newly reported Covid-19 cases in the U.S. hit a record high Thursday, as did deaths reported in a day, as the global death toll from the coronavirus pandemic passed 1.5 million. Hospitalizations also hit a record, with 100,667 people in the U.S. admitted as of Thursday, according to the Covid Tracking Project. 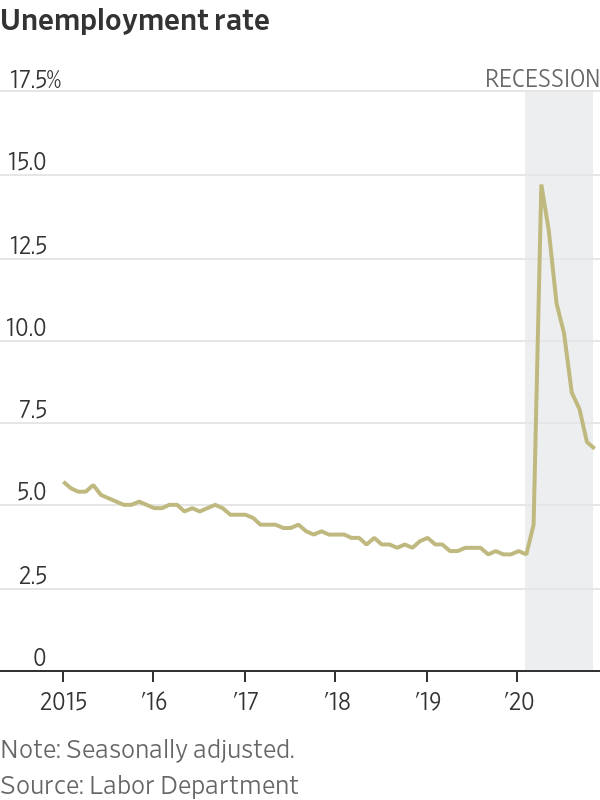 Stocks have posted modest gains this week, after rallying last month as investors cheered progress toward Covid-19 vaccines that could help accelerate the economic recovery. The S&P 500 is up 1.4% for the week, while the Dow industrials are on pace for a 0.8% weekly gain. The Russell 2000 small-cap index is on course to rise 1.4% this week.

“The market is now pausing a little bit, but the underlying story is still intact—that there is basically a global recovery,” said

Luca Paolini,
chief strategist at Pictet Asset Management. “It is difficult to see what can change this kind of positive outlook for equities.”

Among individual stocks, shares of DocuSign gained 5% after the company provided guidance that topped analysts’ expectations. Ulta Beauty shares declined 4% after its chief executive said the company is expecting fourth-quarter comparable-store sales to fall between 12% and 14%.

Brent crude, the global benchmark for oil markets, climbed 1% to $49.18 a barrel after OPEC and a group of Russia-led oil producers agreed to increase their collective output by 500,000 barrels a day next month.

The world’s biggest producers are betting that the worst of a pandemic-inspired shock to demand is behind them after curtailed travel weighed heavily on oil prices this year.

The blacklist, which the U.S. launched last month, has hit stocks and bonds of the targeted Chinese companies. Index compilers FTSE Russell,
JPMorgan
and MSCI are rethinking their stance on these securities targeted by the U.S. government and have been collecting investor feedback.

Traders are buying and selling stock options at a record pace. WSJ explains how call and put contracts work, and why they carry hidden risks for amateur investors. Illustration: Zoe Soriano for the Wall Street Journal[object Object]

Write to Karen Langley at karen.langley@wsj.com, Caitlin Ostroff at caitlin.ostroff@wsj.com and Frances Yoon at frances.yoon@wsj.com

Crackdown against opposition ahead of PDM rally in Pakistan's Multan

Spain to vaccinate workers and residents at nursing homes first

Dow on Track to Finish Best Month in Over Three Decades

Fed Could Become Early Flashpoint Between Biden and McConnell