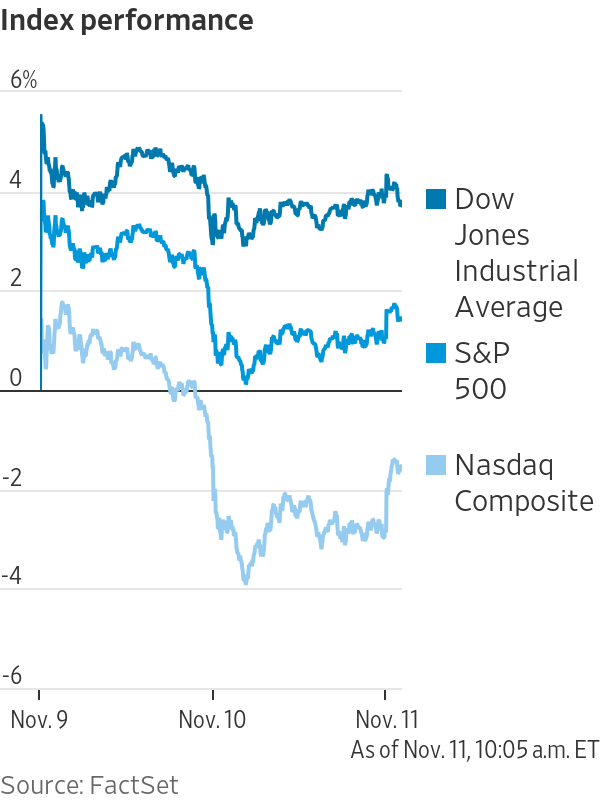 The S&P 500 rose 0.4%, led by its information-technology sector. The tech-heavy Nasdaq Composite climbed 1.4%, a reversal after two days in the red, with the help of heavily-weighted big tech stocks.
Amazon.com
shares advanced 2.1%, and
Microsoft
rallied 2.2%.

The Dow Jones Industrial Average ticked down 0.1%, or about 17 points, reversing earlier gains

Megacap tech stocks powered markets higher through 2020 but took a hit earlier this week as investors cheered progress toward a Covid-19 vaccine and began rotating into cyclical sectors such as manufacturing and energy. 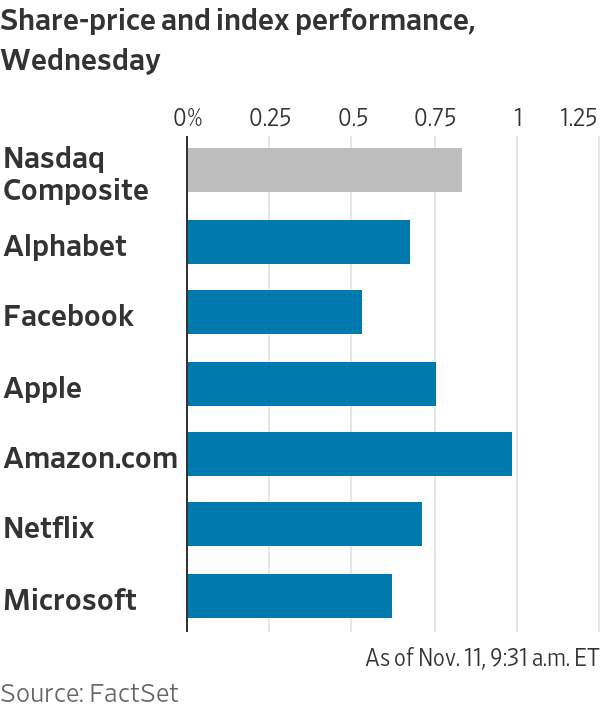 “What we are seeing now is the classic saying that in the short term, the market is a voting machine, and in the long term, it is a weighing machine,” said Altaf Kassam, European head of investment strategy and research at State Street Global Advisors. “What we saw in the tech sector was that it was the FAANGs that bore the brunt of the selloff, but more broadly, tech didn’t do that bad. That was the knee-jerk reaction.”

The rollout of a Covid-19 vaccine is likely to power the global economic recovery and lift stocks across sectors, giving momentum to a new leg of the market’s rally, investors said.

“There is still a lot of money on the sidelines,” according to Mr. Kassam. “With the optimism that the vaccines could now come, [that] means that some of that money could start to drift back in.”

Still, some investors are focusing on the hurdles facing making a vaccine widely available, and questions about the size of the next fiscal stimulus package. Coronavirus hospitalizations set a record in the U.S. on Tuesday, a fresh reminder that the pandemic is far from over.

“What you are seeing over the last 24 hours is a tug of war between those who see the vaccine as a close-your-eyes moment and those who want to look at the risks now,” said Jim McCormick, global head of desk strategy at Natwest Markets. “At the moment, the former group is winning.”

Among individual stocks, Lyft shares rose 6.2% after the ride-hailing company’s revenue and number of active riders climbed as lockdowns eased in some cities.

U.S. bond markets are closed Wednesday for Veterans Day. The yield on 10-year Treasurys has climbed for four straight days and ended Tuesday at 0.970%, its highest since March 19.

Overseas, the pan-continental Stoxx Europe 600 rose 0.9%. Major Asian equity benchmarks ended the day on a mixed note. Japan’s Nikkei 225 Index rose 1.8% to close at its highest level since 1991. South Korea’s Kospi rose 1.4% to its highest in over two years.

The main benchmarks in both Hong Kong and China ended the day lower. Shares in some of China’s biggest tech companies fell sharply for a second day.

The move echoed a pullback in U.S. tech stocks on Tuesday, and came after China released new draft antimonopoly rules for online platforms. The rules signaled an increased appetite by Beijing authorities to rein in its dominant technology companies.

—Karen Langley contributed to this article.

Write to Will Horner at William.Horner@wsj.com

Thousands protest against French bill to curb identification of police

On Liberty and Thanksgiving

Investors Diurnal Team - November 20, 2020 0
WASHINGTON — Treasury Secretary Steven Mnuchin said he does not plan to extend several key emergency lending programs beyond the end of the year and asked the Federal Reserve to return the money supporting them, a decision that could hinder President-elect Joseph R. Biden Jr.’s ability to use the central bank’s vast powers to cushion the economic fallout from the virus.Mr. Mnuchin on Thursday said he would not continue Fed programs, including ones that support the markets for corporate bonds and municipal debt and one that extends loans to mid-sized businesses. The emergency efforts expire at the end of 2020, but investors had expected some or all of them to be kept operational as the virus continues to pose economic risks.The pandemic-era programs are run by the Fed but use Treasury money to insure against losses. They have provided an important backstop that has calmed critical markets since the coronavirus took hold in March. Removing them could leave significant corners of the financial world vulnerable to the type of volatility that cascaded through the system as virus fears mounted in the spring. By asking the Fed to return unused funds, Mr. Mnuchin could prevent Mr. Biden’s incoming Treasury secretary from