The Samsung Galaxy Note20 Ultra is a sleek work beast 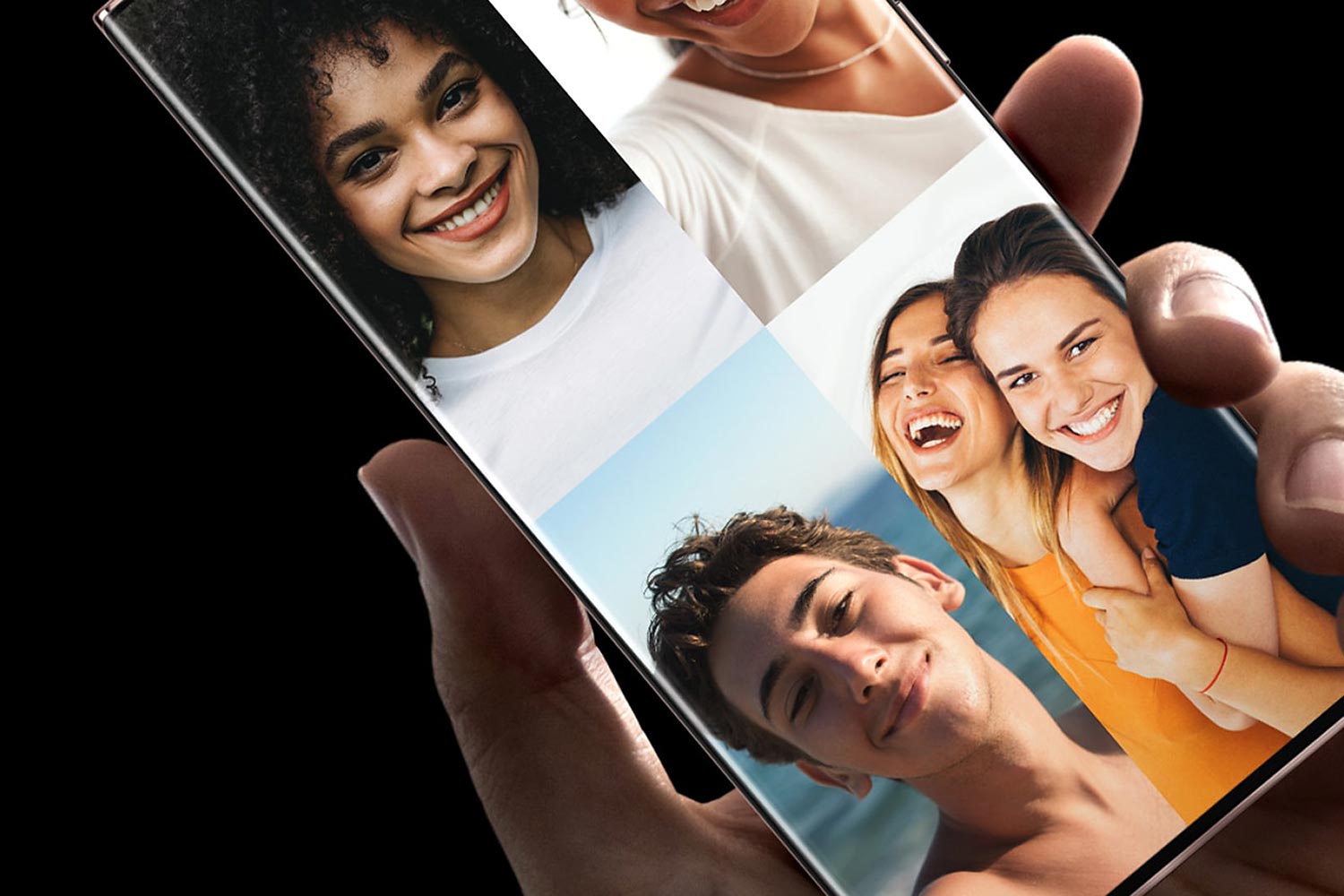 The new Samsung Galaxy Note20 Ultra is one of the sleekest phones the Korean manufacturer has ever produced, but don’t be fooled. Hidden beneath its glossy sheen is a powerful smartphone that could possibly do away with the need of a tablet. Is this a good enough reason for you to spend your hard-earned cash on it? Read on.

The Note20 Ultra is big, that’s for sure, but its size is just right so that it doesn’t feel clunky in your hands. Its weight isn’t an issue either since it’s not too heavy despite its size. The metallic finish on the back of the phone is a much better alternative than the glass on some of Samsung’s other phones as it didn’t retain oily fingerprints as much. Meanwhile on the front, the Note20 Ultra sports a 6.9″ Gorilla glass display, which Samsung boasts as the toughest ever on a smartphone. Though I didn’t do a drop test, I think it’s safe to assume that this doesn’t necessarily mean the glass is unbreakable and that you can go around dropping the phone willy-nilly. Anyway, why would you do that? The phone looks stylish in whatever of the three colours you choose: bronze, white or black. The only reservation I have about its design is its camera. Remember when all of us made jokes about how ridiculous the iPhone looked with the “three-eyed” camera but then everyone just followed suit? The Note20 Ultra is no different but in this day and age, that many cameras on the back is a normal thing. What I found a little disconcerting was the way the camera protruded significantly from the back of the phone. It fits just right in my pocket, just teetering on the edge of being a little too big, but the protruding camera meant that it awkwardly jutted out in my pocket. It also meant that it was impossible to actually lay the phone flat on its back. Technically, the Note20 Ultra is actually pretty thin, measuring only 8.11 mm, but the camera protrusion makes it feel like it’s larger.

It’s no mystery that the recent years haven’t really brought any sort of groundbreaking developments for smartphones. Despite that, the Note20 Ultra is still a powerful piece of machinery. One of the things it’s built for is productivity meaning that it would have to operate quickly, smoothly and be able to handle tasks that require a large amount of memory. A 12GB RAM may not seem impressive but as I used it over a week or two, it was more than enough so that the phone functioned seamlessly. Being a Note model, it also comes with an S Pen, which not just allows you to make notes but allows you to make air gestures that can control the phone with a simple flick.

The Note20 Ultra is a great companion for someone who’s always working on the go what with its smooth user interface and the S Pen that allows you to make notes and edit documents which you can pass on to your laptop to continue working on it. One of the big factors of being on the go is battery life but I’m happy to say that there’s no need to worry when it comes to the Note20 Ultra. When I used it solely for social media for a day, the battery didn’t even drop to 50%.

All work and no play makes Jack a dull boy as the old saying goes. Luckily, this phone not only helps you in your work but it’s also a pretty badass phone to play games on. Graphics are crisp on the large screen, and because it is large, controls are easy even for those with pudgy fingers like me. Let’s be honest though, you’ll probably just play multiple rounds of “Among Us” on your commute home.

The Samsung Galaxy Note20 Ultra is a powerhouse of a phone that’s great for the working professional, who’s always on the go. On top of that, its stylish look gives you a bit of flair. At B38,900, the price may be somewhat hefty but you’re getting your money’s worth.

Investors Diurnal Team - October 4, 2020 0
Locall Thailand, part of the Satarana social enterprise network, helps connect unemployed motorcycle-taxi drivers and tour guides to local restaurants in need of delivery services. In the post-pandemic world, where technology plays a more crucial role in reshaping habits, travel tech companies are connecting the space between technology and travel and accelerating the reboot of Thai tourism after being hit hard by the global health emergency. When safety becomes the primary concern, new lifestyles that require social distancing practices are needed. Online booking processes can help make this available. TRAVEL DIFFERENTLY Rungsun Promprasith, chief executive of QueQ, a queue-management application, said that after the Covid-19 outbreak the company partnered with the Department of National Parks, Wildlife and Plant Conservation to provide tourist advance reservations via the QueQ app to limit the number of tourists. There is plenty of demand from tourists asking for online payment channels,
Europe

Investors Diurnal Team - October 26, 2020 0
SAP SE reports a 4% year over year decline in third-quarter revenue. The German multinational saw a 1% annualised decline in operating profit. The business software maker cuts its full-year guidance due to COVID-19. SAP SE (ETR: SAP) said on late on Sunday that its sales and profit in the quarter that concluded on 30th September came in lower than expected. The company attributed the decline to the ongoing Coronavirus pandemic that weighed on demand in recent months. Shares of the company opened close to 20% down in the stock market on Monday. On a year to date basis, SAP SE is now more than 15% down. It is now trading at £92.51 per share versus a low of £82.59 per share in March when the impact of COVID-19 was at its peak. Confused about choosing a reliable stockbroker to trade online? Here’s a comparison of the top few to make selection easier for you. Are you looking for fast-news, hot-tips and market analysis? Sign-up for the Invezz newsletter, today. SAP’s revenue from software and cloud services slides 2% SAP SE reported £5.92 billion of revenue in the fiscal third quarter that represents a 4% decline as compared
Tech

Cisco to pay £1.47 billion to Centripetal Networks for patents infringement

Investors Diurnal Team - October 6, 2020 0
The U.S. District Court says Cisco Systems violated four of Centripetal's patents. Cisco to pay £1.47 billion to Centripetal Networks for patents infringement. The U.S. multinational to appeal in the U.S. Federal Circuit Court of Appeals. Judge Henry Morgan of the U.S. District Court in Norfolk, Virginia ordered Cisco Systems (NASDAQ: CSCO) on Monday to pay £1.47 billion to Centripetal Networks Inc for patents infringement. Cisco still performed fairly upbeat in the stock market on Tuesday and closed the regular session close to 1.5% up. Including the price action, shares of the company are now trading at £30.19 versus £37.42 per share at the start of 2020. In March, Cisco slid to a lower £25.66 per share due to COVID-19 disruptions. Here’s what you need to know about value investing strategy. Are you looking for fast-news, hot-tips and market analysis? Sign-up for the Invezz newsletter, today. Cisco to appeal in the U.S. Federal Circuit Court of Appeals Centripetal had accused Cisco of violating five of its patents. According to the non-jury trial that lasted for about a month, there was substantial evidence that Cisco violated four of these. Cisco acquired PortShift last week to expand its footprint in DevOps and Kubernetes security. The U.S. court valued actual damages to be paid to Centripetal at £584.12 million but multiplied it by 2.5 citing Cisco’s conduct that it called willful and egregious. In the ruling, Morgan said: “Cisco did not advance any objectively reasonable defences at trial. The infringing functionality was added to their accused products post June 20, 2017, and resulted in a dramatic increase in sales which Cisco touted in both technical and marketing documents.” Cisco, however, expressed disappointment in the decision on Monday. The company said its innovations predated Centripetal’s patents by several years. Cisco expressed confidence that it had sufficient evidence of invalidity and non-infringement as it revealed plans of appealing in the United States Federal Circuit Court of Appeals. Cisco published its quarterly earnings report in late August The news comes only a month after Cisco published its earnings report for the full year that highlighted £38.10 billion in revenue and £8.66 billion of net income. Centripetal’s lawyer, Paul Andre, also commented on the court’s decision on Monday and said: “With this judgment, the court rejected the primitive doctrine that might makes right. This is a significant win for all small, innovative companies.” Founded in 2009, Centripetal Networks relies on firewall hardware and threat intelligence software to secure networks against cyber-attacks. Cisco performed slightly upbeat in the stock market last year with an annual gain of roughly 10%. At the time of writing, the American multinational technology conglomerate is valued at £127.75 billion and has a price to earnings ratio of 14.81.