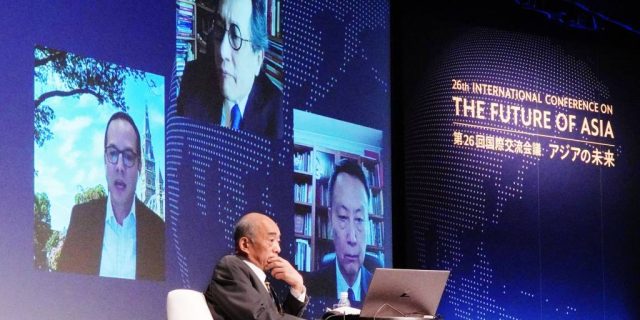 TOKYO — Asia-Pacific countries hoping the U.S.-China rivalry will die down and no longer dominate the region’s geopolitics are likely to be disappointed, experts suggested Friday in a panel discussion during Nikkei’s Future of Asia conference.

“No country in the world really is going to be immune from the direct or the indirect effects of the U.S.-China tension moving forward,” Evan Medeiros, former senior director for Asia on the U.S. National Security Council, saying the tension between the two countries is likely to intensify. “We’re in a new normal. The new normal presents a different geopolitical reality than the past, and it’s going to create risks and costs for others.”

He argued that China’s diplomatic course is unlikely to change even as the country matures. “As China’s capabilities grew, Chinese leaders were looking to use those capabilities in new and different ways that we’re increasingly running up against American security interests and…

Embedded finance is grabbing investor attention. Here's why it's the hot new space in...

Why Are Investors Flocking to Nashville’s Real Estate Market?

Watch out for tech impostors who want to steal your money...

Con artists are scamming BC residents on cheap flight deals

Investors Diurnal Team - April 25, 2021 0
BAGHDAD: A fire sparked by an oxygen tank explosion killed at least 82 people and injured 110 at a hospital in Baghdad that had been equipped to house Covid-19 patients, an Interior Ministry spokesman said on Sunday. "We urgently need to review safety measures at all hospitals to prevent such a painful incident from happening in future," spokesman Khalid al-Muhanna told state television, announcing the toll. The fire erupted on Saturday at the Ibn Khatib hospital in the Diyala Bridge area. Ali Bayati, a member of Iraq's semi-official High Commission for Human Rights, had said earlier a final death toll had not yet been officially announced but it could be between 30 to 45. Patients' relatives scrambled during the blaze to save their loved ones. A man who had been visiting his brother described people jumping out of windows to escape. "The fire spread, like fuel ... I took my brother out to the street, next to the checkpoint. Then I came (back) and went up from there. To the last floor, that did not burn. I found a girl suffocating, about 19 years old, she was suffocating, she was about to die," said Ahmed Zaki. "I took her on
World News

Investors Diurnal Team - April 25, 2021 0
LONDON (AFP) - British Prime Minister Boris Johnson faced growing scrutiny on Sunday (April 25) following explosive accusations by his former chief aide Dominic Cummings earlier this week that he lacks competence and integrity. Mr Cummings, who stepped down as his top adviser in December, used a personal blog on Friday to allege Johnson tried to solicit potentially illegal donations to renovate his publicly-funded Downing Street flat. He also claimed the UK leader suggested blocking an internal inquiry into government leaks, because the culprit identified was a close friend of Johnson's fiancee Carrie Symonds. Mr Johnson's office has dismissed the damning accusations, insisting all "reportable donations" are transparently disclosed and that the prime minister "has never interfered in a government leak inquiry". International Trade Secretary Liz Truss said Sunday the claims were "a massive distraction" and that she had been assured all rules have been fully complied with. "This is tittle tattle that's being promoted and I don't think it addresses the key issues the people of Britain care about," she told Sky News. But the charges, which follow weeks of stories about allegedly inappropriate lobbying and sleaze involving Johnson, his ministers and officials,
World News

Feds weighing how to respond after verdict in Derek Chauvin trial

Investors Diurnal Team - April 20, 2021 0
WASHINGTON: The Biden administration is privately weighing how to handle the upcoming verdict in the trial of former Minneapolis Police Officer Derek Chauvin, including considering whether President Joe Biden should address the nation and dispatching specially trained community facilitators from the Justice Department, aides and officials told The Associated Press. Closing arguments began Monday in Chauvin's trial with a prosecutor telling jurors that the officer "had to know" he was squeezing the life out of George Floyd as he cried over and over that he couldn't breathe and finally fell silent. Chauvin faces murder and manslaughter charges. The plans for possible presidential remarks are still fluid, with the timing, venue and nature of the remarks still being considered, in part depending on the timing of the verdict, according to two White House aides who were not authorized to speak publicly about private conversations and spoke to the AP on condition of anonymity. The White House has been warily watching the trial proceed in Minneapolis - and then another shooting of a Black man by a white police officer last week - and are preparing for the possibility of unrest if a guilty verdict is not reached in the trial. Biden