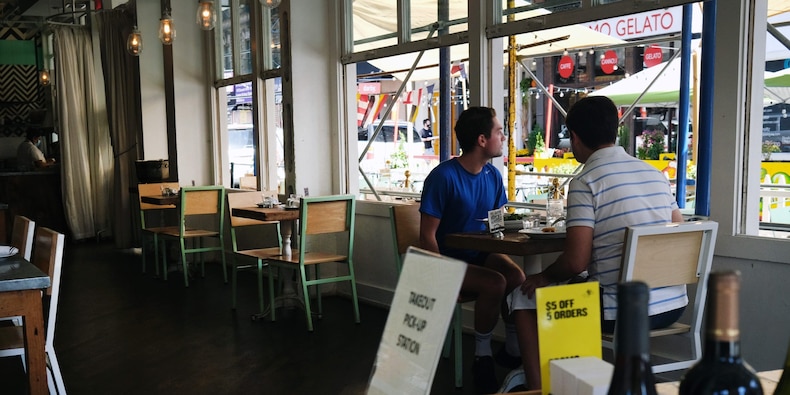 People dine inside a restaurant in Little Italy as New York City restaurants are allowed to open their doors to 25 percent capacity on September 30, 2020 in New York City.

A top gauge of the US service sector unexpectedly improved in December as the holiday season brought an influx of new orders and boosted business activity.

The Institute for Supply Management’s services index climbed to 57.2 from 55.9 last month, according to a Thursday press release. The reading is the highest since September and marks seven straight months of growth for the sector. Economists surveyed by Bloomberg expected the index to dip to 54.5.

Readings above 50 indicate sector growth, while those below the threshold signal contraction.

The gains were primarily driven by a 5.8-point improvement for ISM’s supplier deliveries index. The association’s gauge of business activity jumped 1.4 points to 59.4. ISM’s measure of employment entered contraction territory for the first time in four months, dropping 3.3 points to 48.2.

Read more: Deutsche Bank says buy these 14 beaten-down financial stocks poised for a bullish recovery from 2020’s ‘savage sell-off’ – including one that could rally 30%

“We were braced for declines in all the activity components, so the report overall is not as bad as we hoped,” Ian Shepherdson, chief economist at Pantheon Macroeconomics, said. “But momentum has faded since the initial summer rebound, and we expect no further material improvement until COVID restrictions have been substantially eased.”

The increase comes despite a sharp increase in US coronavirus cases throughout the month. The surge in infections prompted several state and local governments to impose strict economic restrictions. Lockdown measures disproportionately affect service businesses, and several ISM survey respondents cite the worsening pandemic for their gloomier outlooks.

“Starting to see demand weakening as states go back to shut down. Will look to see business resume in late first quarter, as vaccine distribution takes place,” one respondent said.

The pandemic is weighing less heavily on US factories. ISM’s manufacturing index rose to 60.7 last month from 57.5, according to a Tuesday release. The gauge was primarily bolstered by a pickup in employment and production.

Read more: Wall Street experts are calling Georgia’s runoff results ‘the first surprise of 2021.’ Here’s how 4 of them recommend positioning your portfolio for what could happen next.

Tesla, Sarepta, Boeing: What to Watch When the Stock Market Opens Today

How the Chevy Corvette went from America's icon to mid-engine marvel taking after Ferraris...

Investors Diurnal Team - October 28, 2020 0
NEW YORK, Oct. 28, 2020 (GLOBE NEWSWIRE) -- via NetworkWire -- The Investor Summit (“ISG”), long renown for being the largest independent investor conference on the East Coast, will be hosting its premier annual event on November 16-18, 2020. The event, widely known for its track record of bringing together a unique network of high-quality investors and a series of standout companies, follows on from the group’s virtual summer summit held in early June, which was well recognized for continuing to offer promising companies the opportunity to meet and interact with investors in a seamless manner. This year’s fall summit will bring together a carefully curated list of 75 companies, drawn from a diverse mix of sectors including healthcare, technology, consumer, financial, energy, cannabis and blockchain. Each of these issues will be delivering keynotes. As always, the Investor Summit team will act as a concierge, creating beneficial networking experiences for attendees and helping put companies in touch with some of the world’s leading capital allocators. 30 speakers will also be contributing valuable content for the virtual summit. Buy-side panels will include: Risks and rewards of illiquidity Investing in the era of ultra-low interest rates Assessing management teams The growing valuation gap between small caps and large caps Making smart investment decisions in uncertain times Stock pitch competition Sell-side panels will include: Making issuers aware of the impact of ESG Developments at the OTC Markets Group To learn more about the upcoming Virtual Fall Summit, visit https://investorsummitgroup.com “The Investor Summit team have always prided themselves in enabling our participating companies to form a series of deep and meaningful relationships with the wide variety of investors in attendance,” said Fred Rockwell, founder of ISG. “As evidenced by our prior events this year, the shift to a virtual format and additional marketing support has led to a surge of investor interest and meeting requests. This has increased our excitement for the upcoming fall summit, traditionally our annual flagship event.” “In what has been a largely disrupted year with investors unable to meet with companies in a face-to-face manner, we have found our virtual Investor Summit to offer a great deal of value,” continued Rockwell. “Our team focuses on carefully selecting small and micro-cap companies that are looking for the opportunity to share insights, provide operational updates and raise their overall exposure to the host of institutional, RIA, family office, and high-net-worth investors in attendance.” About Investor Summit GroupInvestor Summit Group (“ISG”) hosts the largest independent investor conference on the East Coast. Its independence allows conference organizers to focus on customer service and scheduling high-quality meetings between the executives and investors who attend. The ISG team sets the bar for quality service in a space traditionally dominated by banks who focus more on selling their services than on building the connections companies need to succeed. ISG has facilitated countless valuable interactions for its presenting companies, which have often led to increased exposure, market value appreciation and long-term growth. For more information, visit www.investorsummitgroup.com General Inquiries:Brittney BlockerInterim COOBrittney@InvestorSummitGroup.com Corporate Communications:InvestorBrandNetwork (IBN)Los Angeles, Californiawww.InvestorBrandNetwork.com310.299.1717 OfficeEditor@InvestorBrandNetwork.com
Markets

Inside Panera Bread's plan to dominate the 'Zoom lunch' as the...

Investors Diurnal Team - October 1, 2020 0
(RTTNews) - Asian stock markets are mostly higher on Thursday in holiday-thinned trade following the positive cues overnight from Wall Street amid optimism about U.S. fiscal stimulus after Treasury Secretary Steven Mnuchin and House Speaker Nancy Pelosi said they will continue talks on a new coronavirus relief bill. The Tokyo Stock Exchange in Japan has suspended trading due to a technical issue, while the markets in China, South Korea, Taiwan and Hong Kong are closed for holidays. The Australian market is rising following the overnight gains on Wall Street and as data showed that the manufacturing sector in Australia continued to expand at a faster rate in September. According to reports, Prime Minister Scott Morrison is set to announce later today that his government will make A$1.5 billion available to Australian manufacturers across six priority areas to boost production of goods in Australia. The benchmark S&P/ASX 200 Index is advancing 44.20 points or 0.76 percent to 5,860.10, off a high of 5,869.90 earlier. The broader All Ordinaries Index is adding 48.00 points or 0.80 percent to 6,057.30. Australian stocks closed sharply lower on Wednesday. Among the major miners, BHP Group and Fortescue Metals are rising more than 2 percent each, while Rio Tinto is advancing 2 percent. In the oil sector, Oil Search is advancing more than 1 percent, while Santos and Woodside Petroleum are adding almost 1 percent each after crude oil prices rose overnight. The big four banks - ANZ Banking, Commonwealth Bank, Westpac and National Australia Bank - are higher in a range of 0.1 percent to 0.5 percent. In the tech space, Afterpay is advancing more than 1 percent and WiseTech Global is rising almost 1 percent, while Appen is down 0.2 percent. Gold miners are mixed after gold prices declined overnight. Evolution Mining is rising 0.4 percent, while Newcrest Mining is down 0.4 percent. In economic news, the latest survey from IHS Markit showed that the manufacturing sector in Australia continued to expand in September, and at a faster rate, with a manufacturing PMI score of 55.4. That's up from 53.6 in August and it moves further above the boom-or-bust line of 50 that separates expansion from contraction. Elsewhere in Asia, Singapore and Indonesia are rising more than 1 percent each, while New Zealand is also higher and Malaysia is lower. The markets in Taiwan, China and Hong Kong are closed for the Mid-Autumn Festival, while South Korea is closed for the Chuseok Festival. On Wall Street, stocks closed higher on Wednesday in volatile trading amid uncertainty about a potential agreement on a new coronavirus stimulus bill. The pullback by the major averages came after Senate Majority Leader Mitch McConnell said Republicans and Democrats remain "far apart" on a deal. However, stocks rebounded as Treasury Secretary Steven Mnuchin and House Speaker Nancy Pelosi failed to reach an agreement after a meeting today, but indicated talks would continue. The Dow jumped 329.04 points or 1.2 percent to 27,781.70, the Nasdaq climbed 82.26 points or 0.7 percent to 11,167.51 and the S&P 500 advanced 27.53 points or 0.8 percent to 3,363.00. Meanwhile, the major European markets all moved to the downside on Wednesday. While the French CAC 40 Index slid by 0.6 percent, the German DAX Index and the U.K.'s FTSE 100 Index both fell by 0.5 percent. Crude oil prices rebounded after early weakness on Wednesday as data showed a drop in U.S. crude inventories in the week ended September 25. WTI crude for November added $0.93 or about 2.4 percent at $40.22 a barrel.