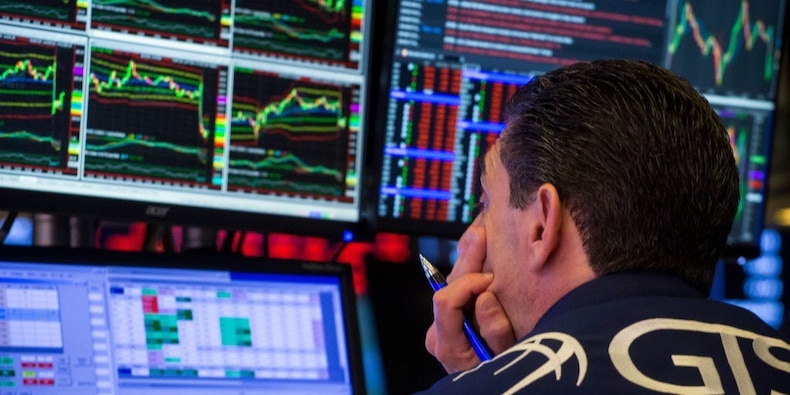 US stocks edged higher on Tuesday as investors optimistic for a full economic rebound bought the market’s recent dip.

Hopes for widespread vaccination and Biden-backed stimulus continue to lock horns with stocks’ lofty valuations. Fallout from last week’s violent riots at the Capitol continues to weigh on market sentiments, and Democrats are expected to vote to impeach President Donald Trump on Wednesday.

Shambolic vaccine distribution across the US has also cut into some investors’ recovery outlooks. CNBC reported Tuesday morning that the Trump administration will issue updated vaccination guidance that expands eligibility to everyone 65-years-old and older. The move comes after some states discarded vaccines instead of using them on ineligible populations.

“Vaccine rollouts have been messy, but as more vaccines get regional approval, risk appetite is thriving as we get closer to the other side of COVID,” Edward Moya, senior market analyst at Oanda, said.

Here’s where US indexes stood shortly after the 9:30 a.m. ET open on Tuesday:

Read more: An ETF provider whose specialty funds have smashed the market breaks down how to capitalize on the red-hot SPAC craze – and shares 4 to watch in 2021

The mild uptick comes after stocks stumbled to start the week. Equities fell from record highs on Monday as investors weighed the impact of an impeachment vote and stretched valuations. Facebook and Twitter dragged on major indexes as investors balked at the companies’ moves to ban permanently Trump.

The National Federation of Independent Businesses said Tuesday its gauge of small-business optimism plunged to a seven-month low in December as COVID-19 restrictions intensified. Nine of the index’s 10 components declined through the month and the association’s measure of general-business-condition outlook tumbled into net negative territory.

Bitcoin recovered slightly after plummeting from record highs. The world’s largest cryptocurrency traded at roughly $33,600 on Tuesday, about 1% higher from the prior 24 hours, after sliding as low as $30,305.30 Monday night.

Read more: The CIO of a $500 million crypto asset manager breaks down 5 ways of valuing bitcoin and deciding whether to own it after the digital asset breached $40,000 for the first time

Spot gold climbed as much as 1.1%, to $1,863.81 per ounce, before paring gains. The US dollar weakened slightly against a basket of currency peers and Treasury yields rose.

Oil prices gained amid the US dollar’s decline. West Texas Intermediate crude rose as much as 1.9%, to $53.26 per barrel. Brent crude, oil’s international standard, climbed 1.9%, to $56.73 per barrel, at intraday highs.

Here’s why the approval of a US bitcoin ETF would send the cryptocurrency tumbling in the near term, according to JPMorgan

Amazon's decision to sever ties with Parler might not kill the...

Investors Diurnal Team - January 10, 2021 0
Amazon Web Services will kick Parler off its platform on Sunday at 11:59 p.m. Pacific time. OLIVIER DOULIERY/AFP via Getty ImagesAmazon will kick Parler off its web servers, leaving the controversial social network to scramble for a new web host. Tech giants including Apple, Google, and Amazon have all recently backed away from Parler, an app that mainly appealed to far-right conservatives with limited content moderation. Parler CEO John Matze said the site could be down for up to a week, as "we rebuild from scratch." "Probably not the end to Parler," one disinformation expert told Insider. "They just have to find another server space." Visit Business Insider's homepage for more stories. Parler will be kicked off Amazon's web servers early Monday morning, forcing the controversial social networking site to go dark for at least a few days. But experts say that it's unlikely to be the end of the platform.  Technology giants including Amazon, Apple, and Google have taken a flurry of actions against Parler since the insurrection at the US Capitol by a mob of President Donald Trump supporters. While the actions are likely to lead to a decline in Parler 's popularity, experts said the app isn't necessarily dead in the long-term. "It is realistic to expect that Parler will find another provider to host their services like AWS," Max Aliapoulios, a computer science Ph. D candidate at New York University focused on understanding and mitigating socio-technical problems like cybercrime and online extremism, told Insider in an email. Read More: Amazon is removing Parler from its web hosting service For instance, the fringe message board 8kun and the social media platform Gab both used Epik as a new host, Aliapoulios noted.  "That being said, now the precedent is set and Parler will likely always have an uphill battle with finding a home to host them on the internet," he added. Kathleen Carley, a Carnegie Mellon University computer science professor studying disinformation, also agreed it likely won't be the end of the network, but the decision will likely drive apps like Parler to the dark web and encrypted systems. "Probably not the end to Parler," Carley wrote in an email to Insider. "They just have to find another server space." Parler grew to prominence by cultivating far-right audience A protester holds a Trump flag inside the US Capitol Building. Win McNamee/Getty Images In the past few months, Parler has attracted a far-right conservative audience by pitching itself as a social network with minimal content moderation. The network appeared to play a crucial role as a meeting place for many of the insurrectionists who ultimately stormed the Capitol on January 6 in a rampage that left five people dead, including a Capitol police officer. After Twitter banned Trump's account on Friday, some top conservative figures recently announced they would be moving to the Parler app and encouraged others to do the same. Now, the future is uncertain for the once hot social app. While it may not be dead, Parler appears to be on life support by no longer appearing on the Apple or Google Play app stores and now being kicked off of AWS' servers. Amazon said it will boot Parler off at 11:59 p.m. Pacific time on Sunday.  Apple and Google said the app didn't do enough moderating. Parler users called for violence throughout the attempted coup in Washington, according to Insider reporters Margaux MacColl and Kevin Shalvey. Parler said it was being unfairly targeted. "This was a coordinated attack by the tech giants to kill competition in the market place," Matze said in a statement. "We were too successful too fast. You can expect the war on competition and free speech to continue, but don't count us out." Plan to 'rebuild from scratch' could be a daunting task Matze also said Parler could be offline for up to a week as "we rebuild from scratch." It's unclear what that would entail, or how reliant Parler was on AWS for cloud services and hosting. BuzzFeed News first reported Amazon's decision to sever ties with Parler.  "Getting booted off AWS is virtually unheard of; when people leave intentionally the planning takes months; execution can take years," Corey Quinn, chief cloud economist at The Duckbill Group wrote on Twitter.  Quinn said it takes time to move all the data from web servers, and other AWS offerings aren't directly compatible with other servers. "Making what you built on AWS's systems work elsewhere is super challenging," he added.  Moving to a new provider typically takes months or years. Parler received about 30 hours of notice, Quinn said. The platform said it had about 4 million active users as of November. Beyond the problems of finding a new host, Parler could also face the challenge of actually running a profitable business. Read More: Terrified Pelosi staffers barricaded themselves in a conference room and huddled under a table as pro-Trump rioters ransacked the speaker's office: Report Aliapoulios noted that Parler had been planning for months to launch an influence network - "basically just a portal for advertisers and influencers to make money," he added.  "I think they may have a hard time finding enough companies, who want advertising on a site that is full of violent extremists, to offset the cost of their cloud provider bill," Aliapoulios said. But in the long-term, Parler may well survive given its existing popularity. Aliapoulios noted that other controversial sites like 8kun and Gab are still around. In fact, Gab said it was seeing a surge in demand over the weekend as other social media sites cracked down.